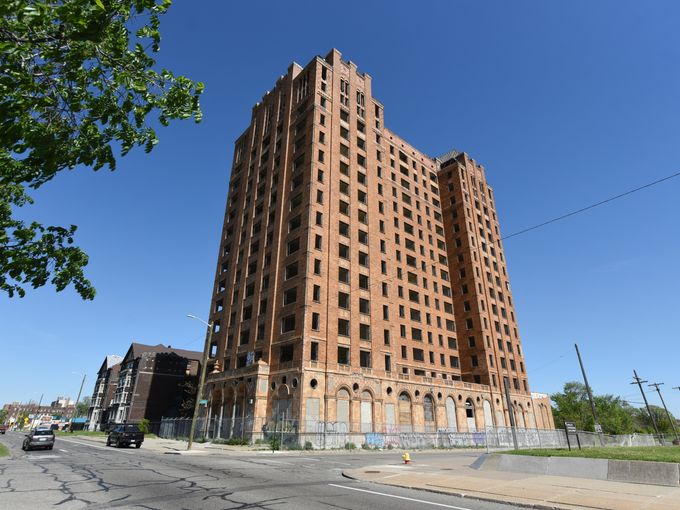 The city of Detroit announced today plans to sell the historic Lee Plaza to a venture being formed by Roxbury Group and Ethos Development Partners for redevelopment of the architecturally significant building at W. Grand Boulevard near Linwood.

The project would create 180 new residential units and add retail in one of Detroit’s fastest growing neighborhoods and bring back to life an architectural gem that has sat vacant for more than 20 years. The project is also expected to reserve at least 50 percent of its units for residents earning a range of incomes below the area median income level, between $40,000 annually and $24,000 annually or lower.

The sale, which requires City Council approval, is the first step towards renovation of the iconic building. Council members have been presented the proposal and will consider it as soon as this week. The property has been vacant for over 20 years and is in advanced state of deterioration. In anticipation of redevelopment, the city has been working to stabilize the structure over the last year, and the proposal before council will call for the developer to collaborate with the city on further steps to maintain the property while plans are being developed for its ultimate redevelopment. Developers estimate that the restoration of Lee Plaza will cost upwards of $50 million.

The redevelopment of Lee Plaza, built in 1928 and vacant since 1997, will revitalize one of the most iconic buildings outside of Detroit’s downtown core and expand opportunities for additional development along the West Grand Boulevard corridor between the Lodge freeway and I-96.  Lee Plaza is located in the NW Goldberg neighborhood, not far from New Center, the Henry Ford Health System campus and other growing neighborhoods like LaSalle Gardens and Woodbridge.

“An entire generation of young Detroiters has known Lee Plaza only as that vacant eyesore next to Northwestern High School.  While this building has deteriorated significantly over the last two decades, we have tapped a development team that has saved many buildings others said were too far gone to be brought back to life ” said Mayor Mike Duggan.  “In addition, Roxbury and Ethos are committed to making the redeveloped Lee Plaza available to families that have a range of income levels.”

Development partners Roxbury Group and Ethos Development Partners bring serious preservation and affordable housing experience to the Lee Plaza. Roxbury Group is responsible for the renovation of the David Whitney Building and the Metropolitan Building. The Metropolitan, vacant for nearly 40 years, was often regarded as too far gone and unsalvageable before Roxbury and partners acquired the building.   In addition, Roxbury Group has significant experience with affordable housing. In partnership with Invest Detroit, It recently completed redevelopment of the 165-unit Louis Kamper and Stevens buildings. Ethos Development provided significant support to that transaction. That project renovated and preserved affordability in the senior-living building, ensuring every resident could stay in their home as rents downtown increased.

“The Lee once represented the highest aspirations of the City and this neighborhood,” said David Di Rita, principal of the Roxbury Group. “We plan to honor that legacy by restoring this magnificent property to its original beauty and making it a place all Detroiters are welcome.”

“The redevelopment of the Lee Plaza presents not only a chance to preserve another of Detroit’s architectural gems, but also to preserve affordable housing options in our city,” said Joe Heaphy, president of Ethos Development Partners. “Ethos is proud to help Mayor Duggan with his mission of bringing significant and impactful development to Detroit’s neighborhoods.”

The developers’ historic preservation experience will be critical to the redevelopment of Lee Plaza, which was added to the National Register of Historic Places in 1981. The Lee Plaza was designed by architect Charles Noble and opened Dec. 1, 1927. It was built by real estate tycoon Ralph T. Lee, who was responsible for a number of apartment buildings across Detroit. The Lee was originally what was called a “residential hotel,” which married the idea of a luxury apartment with the service and amenities of a hotel, such as room service and concierges. The building was converted to senior housing in 1969, yet retained its original opulence. When it was added to the National Register of Historic Places, it was largely because of its state of preservation.

Unfortunately, the Detroit Housing Commission closed the Lee in 1997, leaving the building vacant. Scrappers and vandals sadly ransacked the Lee, destroying much of its glory. But the Lee has endured and is now poised to welcome in a new era as one of Detroit’s great places to call home.

Building secured in preparation for redevelopment

The sale follows a $1.7 million transaction earlier this year between the city and the Detroit Housing Commission that transferred Lee Plaza and other vacant buildings to the Detroit Building Authority (DBA). The deal allowed the units to be sold or redeveloped, and lowered the vacancy rate of the DHC inventory, which positioned the commission to achieve a high-performing status, which gives it more flexibility to apply for federal and state programs and dollars.

Following the sale, the DBA completed significant pre-development work to clean and secure the Lee Plaza in preparation for development. New clear boarding was installed over windows throughout the building to secure the property and prevent further weather damage, and hazardous materials were cleared out from the lower floors.

Timeline and next steps

The sale will go before City Council this month for discussion. Pending approval, work will continue to secure and clear the building, including repairs to the roof and the removal of debris and other materials throughout the building. As plans for the building are developed, the City and the developers will work with residents to ensure the final project fits into the neighborhood as an asset to the community. Construction is anticipated to start as early as 2021.

The project is expected to apply for funding through the city’s new $250 million Affordable Housing Leverage Fund, which was established last year to fund projects that preserve or create affordable housing in Detroit. The project is also expected to seek low income housing and federal historic tax credits.