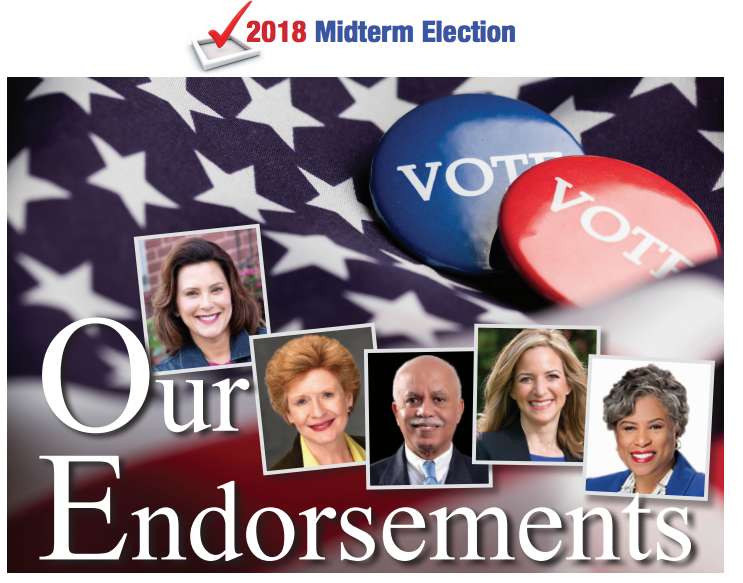 MICHIGAN GOVERNOR
Sen. Gretchen Whitmer D-East Lansing
After endorsing Republican candidates in two of the last three Michigan gubernatorial campaigns, this year it’s not even a close call between Democratic Sen. Gretchen Whitmer and Republican Attorney General Bill Schuette.
Whitmer is a thoughtful, enlightened, and engaging pol, who is energetic and open-minded with a forward-looking policy agenda. Among her most appealing initiatives is the strengthening and expanding of Michigan’s highly successful and urgently needed Healthy Michigan Medicaid expansion program as part of the Affordable Care Act. With more than 680,000 enrollees – including well over 100,000 in Detroit – in only four years of its existence, Healthy Michigan and has brought more than $2.3 billion to our economy and created 30,000 jobs.
She promises to use the windfall from this program to restore funding to Planned Parenthood so that women and men in low income and rural areas have access to preventative care like screenings and checkups, contraception, and maternity care. And to increase access to care in rural Michigan by enlisting technology, bringing people together, and working on a bipartisan solution to the challenges faced by rural hospitals and care providers.
Whitmer also has a very thoughtful plan for rebuilding Michigan’s roads and water system with a proposal to invest $3 billion in a “Rebuild Michigan” state infrastructure bank. The investment could put up to 72,000 Michiganders to work and pay for long-overdue upgrades to our roads and water system.
Her education plan focuses on prioritizing early childhood education funding, getting the state on a path to universal preschool education. And to develop a plan so by high school graduation they are prepared to earn a certificate in the skilled trades, technical apprenticeship or to pursue a college track career.
Unlike her opponent Republican Bill Schuette, she is committed to an inclusive, proactive, and enlightened policy agenda that reflects the needs and realities of a 21st Century Michigan. Her thoughtful, inclusive, governing philosophy encourages business growth and development, while still looking out for the less fortunate and protecting the rights of the marginalized. It is exactly what our state needs at this moment in our nation’s history.

As in the case of Democratic gubernatorial candidate Gretchen Whitmer, the choice for U.S. Senator for Michigan was not even a close call between incumbent Democratic Sen. Debbie Stabenow and her neophyte political challenger, Republican John James.
Despite being in the minority for most of her years in the U.S. Senate Stabenow has been a highly effective senator for Michigan. She has a laudable history of working across the aisle in Washington, D.C. and delivering excellence constituents service at home. Her bipartisan effectiveness was on display recently when she worked with conservative Missouri Republican Sen. Roy Blount on mental health issues and secured $27 million for Michigan community mental health facilities. And worked with Maine Republican Susan Collins to get legislation passed that no longer allowed pharmaceutical companies to gouge customers by prohibiting pharmacists from informing them that they could buy some prescription drugs much cheaper by paying cash, instead of paying insurance co-pay charges.
Just as important as her willingness to collaborate on meaningful legislation with Republican colleagues in Washington is her support for local business endeavors here in Michigan. This includes support for the Gordie Howe International Bridge, her tireless advocacy for Michigan’s manufacturing and technology sectors, agriculture industry and job training and readiness skills for Michigan’s young people and displaced workers. In fact, she is a recipient of the 2017 Small Business Council of America Special Congressional Achievement Award.
And unlike her Republican opponent James, who proudly boasts of his conservative credentials and offers little more than criticism of the Affordable Care Act, Sen. Stabenow stands foursquare behind the program and expanding access to affordable health care for Michiganders.
James who says he stands “2000 percent” behind the Trump agenda, claims because he is African American and from Detroit, he knows what policies are best for African Americans in the city. We beg to differ. According to the Pew Research Center, African Americans only accounted for six percent of Trump’s vote in the 2016 Presidential Election.
And the agenda James so enthusiastically embraces would rob more than 100,000 Detroiters of desperately needed health care, take away critical funding for schools and other essential services to provide tax breaks for the rich. It has also reversed long-standing Department of Education and Housing and Urban Development policies which prohibited racial discrimination in the treatment of minority children and African Americans homebuyers and renters.
It is in fact, flagrantly hostile toward civil rights. Voters should know that when asked by the Chronicle his views on voter suppression, James refused to commit to strengthening or even supporting the re-authorization of the badly emasculated Voting Rights Act. It arguably is the most important legislative victory of the civil rights era.
The legislation urgently needs to be strengthened and reauthorized after being gutted in 2013 by the five conservative justices on the U.S. Supreme Court. The Republican-controlled Congress failure to do so has led to massive voter suppression efforts all over the country.
James also opposes Proposals 2 which mandates that an independent citizens commission be established to draw up non-partisan legislative districts. And Proposal 3 which authorizes automatic Election Day voter registration and voting, no-reason absentee voting, and restores straight-ticket voting as legal requirements of the Michigan Constitution. Each is a common sense, good government, proposal to encourage voting and more civic engagement by ordinary Americans. Any candidate sincerely interested in making sure elections are fair would support these proposals – as does Sen. Stabenow.
Her record of service to Michigan, temperament, commitment to civil rights and willingness to find bipartisan solutions on important issues has earned Sen. Stabenow a well-deserved return to the U.S. Senate.
The Michigan Chronicle endorses incumbent Democratic Sen. Debbie Stabenow for re-election to the U.S. Senate.
Michigan Secretary of State
Jocelyn Benson Democrat – Detroit

In the campaign for Michigan Secretary of State between Detroit Democrat Jocelyn Benson and Grosse Pointe Republican Mary Treder Lang, both candidates vow to make the office work more efficiently, with Benson offering a 30-minute guarantee of service for customers who utilize the office in person.
Benson argues it is unacceptable that people like her and other Detroiters must wait in line sometimes for hours at their local Secretary of State’s Office for routine documentation, while citizens in suburbs less than 20 or minutes away are often in and out in 30 minutes or less. She promises to conduct a thorough review of the office’s procedures and implement the best practices regimen that will lead to all Secretary of State Offices expediting request within 30 minutes.
Treder Lang offers similar efficacies with the bulk of her changes coming from more efficient and expedited online and an increase in mobile services. This includes an ExpressSOS app for use with a smartphone.
Both women offer thoughtful, innovative ideas for improving services. However, beyond issuing drivers licenses and other documents, the highest priority of that office is to ensure all citizens can vote fairly, freely, and that our elections themselves are reflective of the will of the people, not a bunch of self-serving politicians.
Hence, Benson enthusiastically endorses both Proposal 2 and 3. She is emphatic that the proposals will not only engage more Michigan citizens in the voting process but also ensure that non-partisan citizens determine the drawing of legislative districts. Treder Lang rejects Proposal 2 and 3 and even wants to coordinate with other Secretary of States offices across the country in purging voter rolls in a way that sounds suspiciously like the state “cross-check” voter suppression scheme in places like Georgia, Kansas, Wisconsin and other Republican-run Secretary of State Offices. That offensive policy has badly harmed our democracy by kicking tens of thousands of innocent – mainly minority – voters off those states voter rolls.
The Michigan Chronicle endorses Democrat Jocelyn Benson for Secretary of State.
MICHIGAN ATTORNEY GENERAL
Dana Nessel Democrat – Plymouth