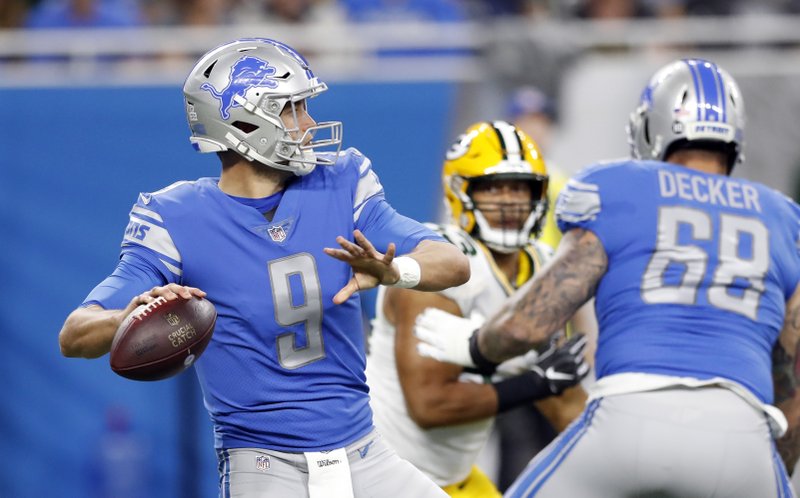 The Detroit Lions have beaten Aaron Rodgers- and Tom Brady-led teams this season.
And yes, they still have a losing record.
Detroit has provided glimpses of its potential, beating the Green Bay Packers 31-23 on Sunday in their first home game since dominating the New England Patriots.
The Lions (2-3) have also shown they have plenty of weaknesses, which were on display in a 31-point loss to the New York Jets at home and during comeback attempts that fell short on the road against Dallas and San Francisco.
Matthew Stafford has had time to throw this season behind an improved offensive line and he has one of the NFL’s best trio of receivers: Kenny Golladay, Golden Tate and Marvin Jones. Rookie Kerryon Johnson and veteran LeGarrette Blount have giving the team a running game it hasn’t had in years. And, the Lions are also having some success on defense under first-year coach Matt Patricia, whose scheme gave Rodgers and Brady problems.
Just don’t ask Detroit’s coaches or players to explain how they can look so good in one game and not so good in another because they can’t explain it.
“This is the way you want to play the game, out in front and to not have to come back,” said Stafford, who helped the Lions lead 24-0 at halftime. “I just think that we had a great week of practice and it showed in the game.”
Here are some other takeaways from the Packers-Lions game.
MASON MISSES
Green Bay kicker Mason Crosby cost his team 13 points, missing a career-high four field goals in a game along with an extra point.
“I don’t usually get this much attention unless I’ve done something really good or really bad,” Crosby said, surrounded by reporters. “This one is unfortunately really bad.”
EMERGING STAR
Golladay had four receptions for 98 yards and a touchdown, which helped the Lions lead 31-14 in the fourth quarter. His play of the day was a 60-yard reception in which he leaped to catch while covered closely by cornerback Josh Jackson and went on to stiff-arm safety Ha Ha Clinton-Dix onto his back.
“He’s obviously a big kid, physical kid, can run, wants to be a really good player,” Stafford said.
The 6-foot-4, 213-pound Golladay has 27 receptions for 428 yards and three TDs this season. The second-year pro, who was a third-round pick from Northern Illinois, had 28 receptions for 477 yards and three scores as a rookie.
PIVOTAL PENALTIES
Green Bay was flagged 12 times for 112 yards and one of most costly penalty allowed Detroit to convert a third down. After stopping Golladay short of a first down in the third quarter, rookie safety Tony Brown stood over him and was penalized for taunting.
“The negatives that you want to talk about is really about the penalties,” Packers coach Mike McCarthy said.
NOT A COINCIDENCE
The Lions entered the game giving up an NFL-high 158 yards rushing per game. They allowed Green Bay to gain just 98 yards. That forced Rodgers to pass 52 times, the third-highest total of his career, for 442 yards, the second-highest total of his career.
Detroit had kept only one other team to fewer than 100 yards rushing this season and that was the Patriots, the only other team it beat this season.
WHAT’S NEXT
Green Bay (2-2-1) will have an extra day of rest and preparation before hosting San Francisco on Oct. 15. The Lions are off until Oct. 21 when they play at Miami.