On Tuesday, October 9, 2018, The Detroit Health Department (DHD) launched iDecide Detroit, a citywide reproductive health initiative aimed at reducing the unintended teen pregnancy rate in the City of Detroit.
With a goal to educate and empower teens in Detroit to make informed decisions about their own reproductive health, iDecide Detroit is a top priority for the Health Department. The DHD has also partnered with more than 20 youth-friendly health care providers throughout the city in an effort provide teens with access to reproductive health care services. 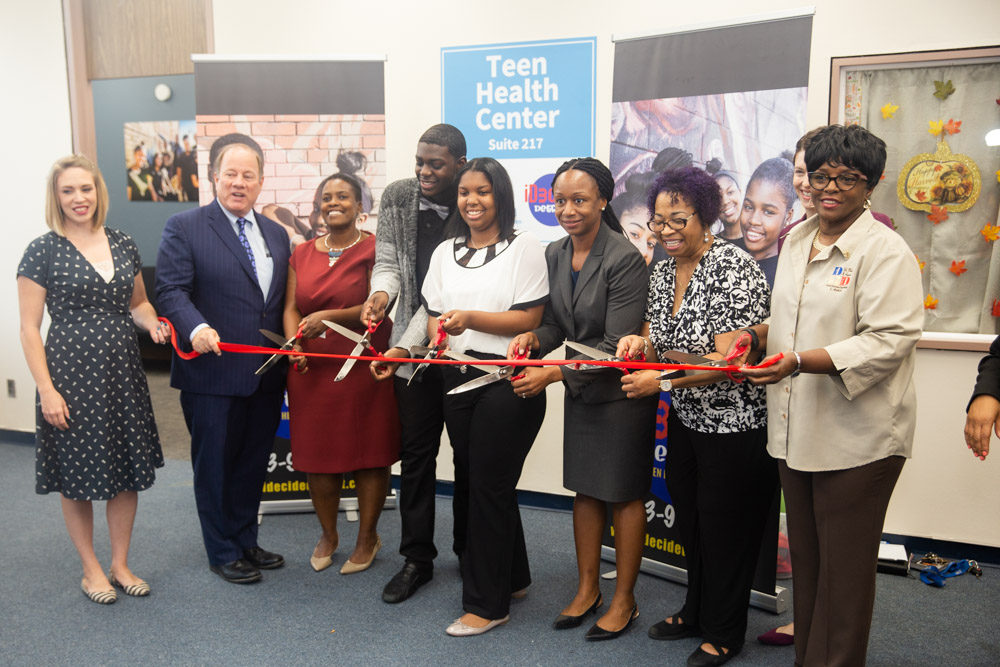 With the launch of the network, the DHD has opened its first iDecide Teen Health Center at the Butzel Family Center located at 7737 Kercheval. The center is open to the public Monday-Friday, 11 a.m. to 7 p.m. and every first and third Saturday from 10 a.m. to 4 p.m. While the center is certainly focused on teens, they will also treat males and females of all ages. The iDecide Detroit health care networks will provide a host of services centered around sexual health such as counseling, contraceptives, birth control, sexually transmitted infection/HIV testing and pregnancy testing and education on reproductive health.
“We want every teen to know they have a choice in determining when they want to become a parent,” said Dr. Joneigh S. Khaldun, the Health Department’s Director and Health Officer and a practicing emergency physician. “This important partnership between the Detroit Health Department and clinics across Detroit will break down unnecessary barriers to access and provide our youth with the information they need to make healthy choices.”
Statistics are showing that teens are choosing to engage in sexual activity at a much younger age and many are ill informed about the inherent risks of irresponsible sexual behavior. Each year, approximately 1,600 Detroit teens ages 15-19 become pregnant. This is nearly 2.5 times greater than the rest of the State of Michigan.  Adolescent girls in Detroit are disproportionately affected by teen pregnancy due to poor awareness of reproductive health options and a lack of access to appropriately tailored reproductive health care services. 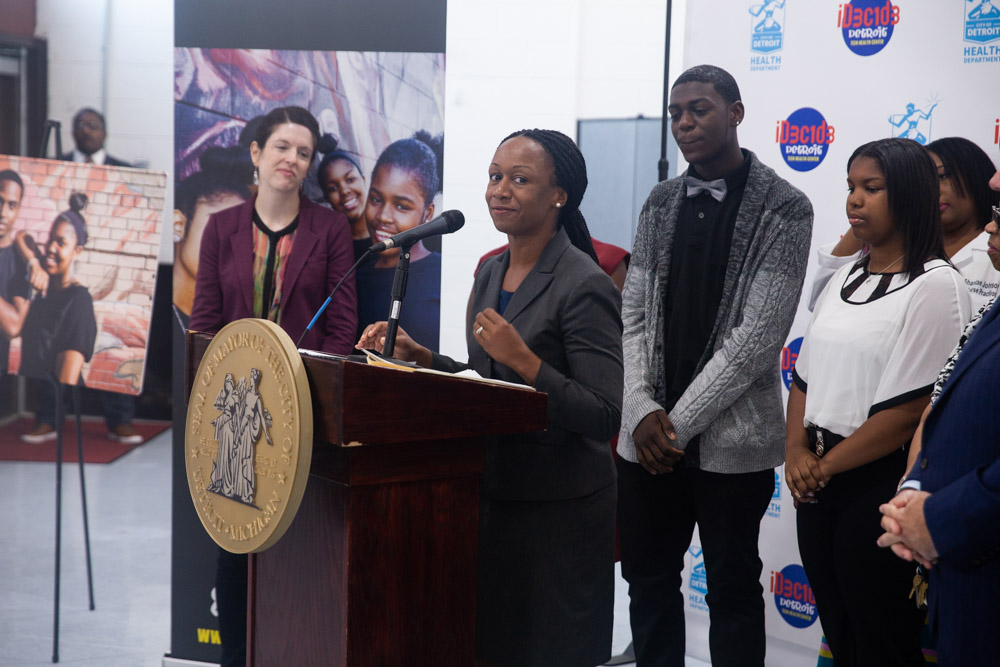 When deciding how to best serve this specialized population the DHD was sure to talk to the youth and engage with them using a youth based lens.  Dr. Khaldun and her team approached the formation of iDecide with a two probg approach to make sure most if not all barriars to good reproductive health are removed. “We spoke to teens and asked them what their challenges and access needs were, said Dr. Khaldun. “Then we talked to the medical providers and asked them what are they seeing in their clinics and what are their challenges in providing reproductive health services.”
Some of the iDecide Detroit network providers include: Butzel Family Center, CHASS, Youthville Henry Ford, Hutzel Women’s Health, DMC Sinai Grace, Henry Ford – Harbortown, Wayne State University Physicians Group, Wayne State Health Center, St. John’s Professional Building OBGYN, Nolan Family Health Center, Woodward Corridor Family Center, Feleta Wilson Health Center, Sophie Womack Health Center, Oscar Pascal Health Center, Advantage Family Health Center, Thea Bowman Health Center and Corktown Health Center.
“We want all Detroit teens to reach their full potential,” said Mayor Mike Duggan.” That’s why we developed, iDecide Detroit to give teens access to  a network of health care providers throughout the city to educate and empower teens to make informed decisions around their own reproductive health.” 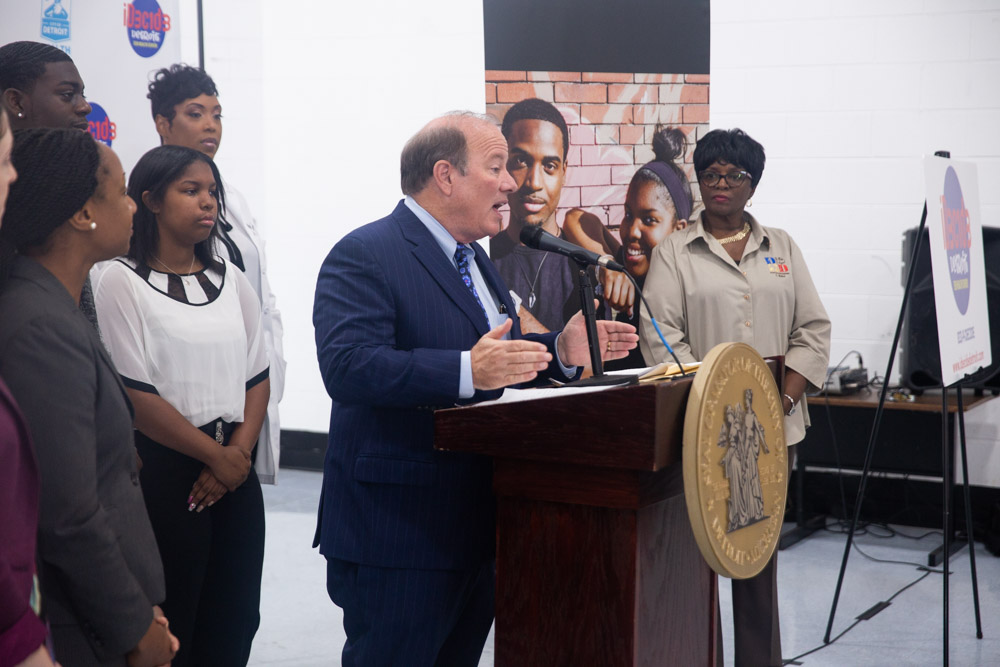 All of the iDecide Detroit network providers are youth-friendly and confidential.  By bringing together this network of healthcare providers in the City of Detroit the Detroit Health Department is able to connect teens to the care they need regardless of their ability to pay.  Network providers have committed to offering appointments at convenient times on a same day or next basis.
“This campaign supports young people to make the best decisions about their own sexual health by empowering them with accurate information and a broad range of contraceptive options,” said Dr. Rachel Lee, Senior Staff Physician of Henry Ford Health System.
The Health Department has also partnered with Teen HYPE to ensure the iDecide Detroit campaign is youth-friendly and engaging. Teen HYPE is a youth movement empowered to strengthen young people through evidence-based programs including health, safety, education and the arts. Teen HYPE youth are featured in the iDecide marketing materials and website.
“Through this project young people have been given an active role in developing an initiative that matters to them.  Youth have worked side by side with adults and served as partners rather than subjects of study. Consistently, research has shown that youth who feel empowered and supported in their communities are less likely to engage in risky behaviors. This campaign sends a strong message of investment in the well-being of Detroit’s youth,” said Ambra Redrick, CEO of Teen HYPE. 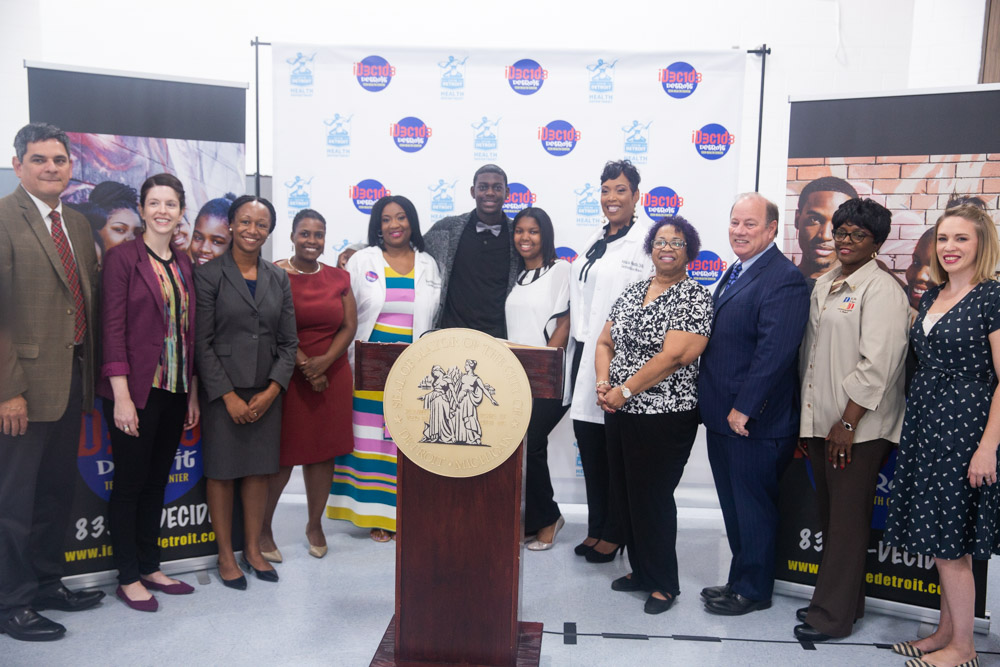 The Detroit Health Department will continue to meet with faith-based and community organizations to heighten awareness around reproductive health in Detroit.
“As a member of the faith community in Detroit, a female leader, mother and educator, I wholeheartedly support the iDecide Detroit initiative knowing this will change the trajectory of outcomes within our female teenage community,” said Bishop Corletta Vaughn, Senior Pastor of Holy Cathedral Church. “As a pastor I have seen so many girls impacted by teenage pregnancy, and as a mother, I’ve experienced it personally.”
The iDecide Detroit initiative was supported by funding from the City of Detroit, The Jacob Foundation, The Lalor Foundation, the Michigan Department of Health and Human Services, and the American Academy of Family Physicians Foundation.