Xenith, the Detroit-based protective equipment design company, has done a lot of work with the Detroit Public School League to ensure the safety of football players with its innovative helmets. For its ‘Under the Lights’ event, the company came from under the helmet to collaborate with 13 DPS football teams and 20 local artists to design football helmets that represented each team’s unique culture and sense of community. The unique helmets were on display at the ‘Light Up Livernois’ art festival on the Historic Avenue of Fashion over the weekend.
The participating schools included Cass Tech, Martin Luther King, Southeastern, CMA, Northwestern, Frederick Douglass, Henry Ford, Central, Renaissance, Mumford, East English Village Prep, Western International, and Academy of the Americas.
“This is a presentation that is a celebration of football, art, community and Xenith all in one,” said Xenith CEO Ryan Sullivan, who was at the event with his family and team. “Detroit is the UNESCO international city of design and with Xenith being a company that leads with design, we wanted to be a part of this event. And since we work with all DPS schools, we thought there would be no better way to work with the community than an event like this.”

Cass Tech legendary head football coach Thomas Wilcher was one of the first visitors to take in the art exhibit on Saturday. Of course, he spent most of his time admiring the Cass Tech helmet, which was designed by former player and artist Ndubisi Okoye. Wilcher reminisced on Okoye’s time at Cass Tech, where he played football, was on the swim team, and was in the school’s graphic design program.
“I think Ndubisi did a great job on it,” WIlcher said. “He highlighted Cass Tech and added a lot of Cass Tech flavor to it. People like to let people know they’re from Cass Tech.”
Okoye also attended College for Creative Studies (CCS) in Detroit, where he met fellow artist Allen Largin. The two reconnected when Largin asked Okoye to be a part of the Under the Lights project. Okoye met with the Xenith team, discussed the goal of the project, then met with current football players at Cass Tech to develop a design. Since unity and family is an important component of Cass Tech football, the slogans “All for one, one for all” and “Together we stand, divided we fall” were written on each side of the helmet, along with the numbers of the players.
“It was amazing to be a part of this project,” said Okoye, who played at Cass Tech in 2010. “It was like my life came full circle. I started off as a walk-on at Cass Tech, barely making the team, to starting at defensive end and linebacker. Then I went all the way left, to art, now coming all the way around back to football.
“Coach Wilcher even remembered me and all the tackles and touchdowns I had on the team. It was an amazing blessing.”

Largin created King’s helmet. Since King and Cass Tech are hated rivals, he wanted to keep that theme going with Okoye, who chose to do his alma mater. Largin and Sullivan met with King head football coach Tyrone Spencer and some of the players, learned about the program’s history, toured the school, and became inspired at what he saw and heard.
The Michigan powerhouse program coined the phrase “Hit Squad” which was incorporated on the helmet as well as some nostalgia. Prior to the school acquiring the King Crusaders name in 1969, they were the Eastern High Indians, and their colors were orange and black. One side of the helmet had a large “E” on it for Eastern and was surrounded by chipping orange paint to represent the battered helmets of crusaders during the Medieval Times.
“I really wanted to have this clash between tradition and the new era that is King football,” said Largin. “I didn’t want the players to forget who they are playing for and who they are representing.”

Artist, Fury, drew from her personal experiences to create the helmet for Henry Ford. She named the helmet “23 and Me” to pay homage to her ethnic roots. Virtually everything on the helmet represented something from seven different countries or cultural groups, which included the United States, Jamaica, Israel, Scotland, England, Ireland, and Panama.
The story goes, a rabbi who lived in Ireland and had an English name, married an Ethiopian woman and immigrated to Jamaica. While there, they had a son, who married a Portuguese woman and moved to Panama, where they had Fury’s grandmother. Fury told the story at the event with her husband and daughter, who also created one of the helmets.
“The 23 and Me helmet is a genetic story: a picture puzzle of where I’ve come from and where I’m going,” said Fury, whose real name is Debora-Grace L. Stanczak. “It also pays tribute to late Pontiac High School’s varsity football coach John Lloyd.
“Parts of my family’s crazy, but beautiful, rich, and intricate history is represented throughout this helmet. I wanted to represent a little bit of the Ethiopian culture in some of the colors and patterns. For example, the lion on the helmet is the body of the Ethiopian lion and the face is that of a fighting lion to represent warriors.” 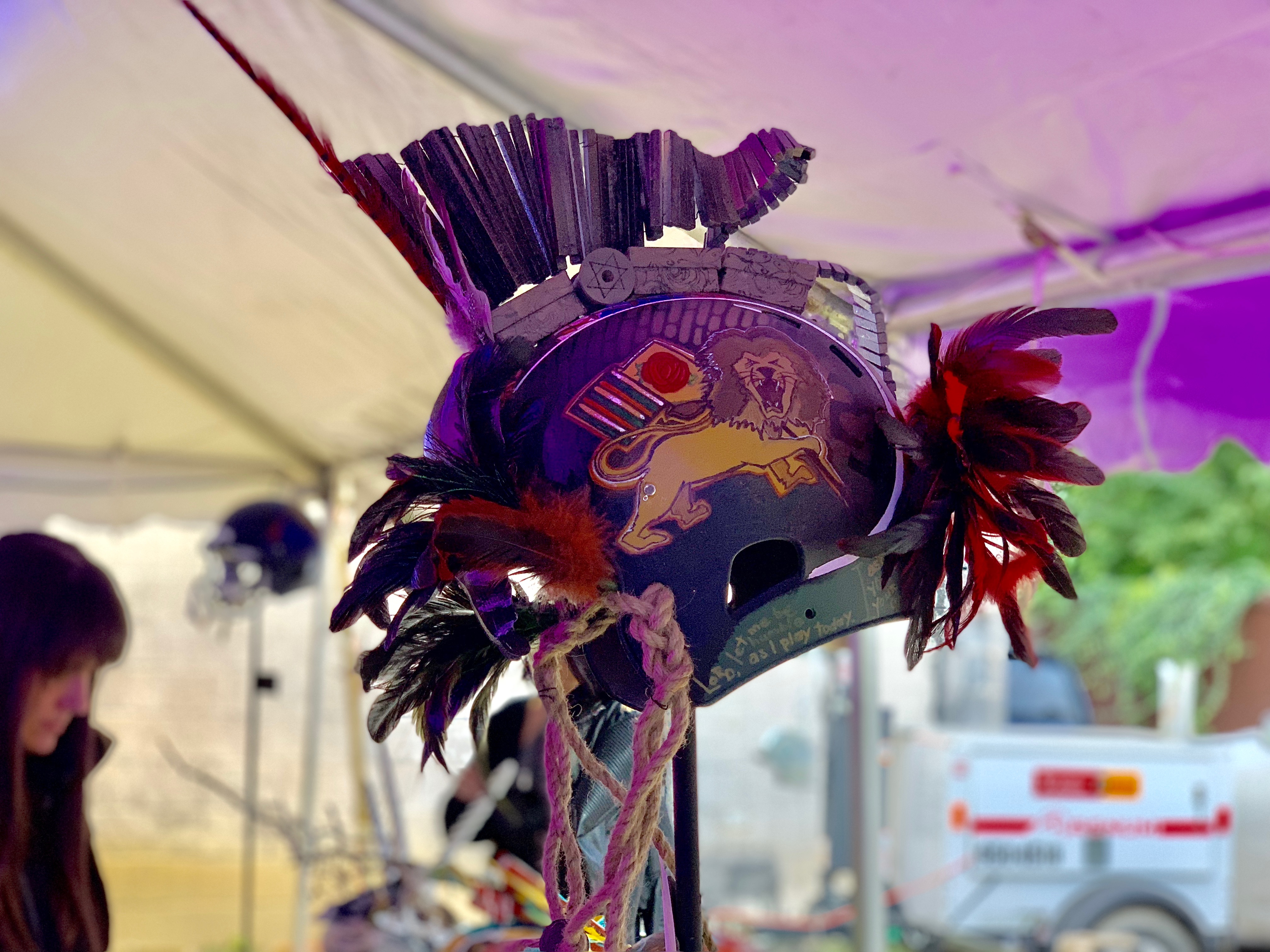 The Under the Lights event was open for all DPS schools and did not cost them a penny. The one-of-a-kind helmets will be donated to their respective schools to be put on display, in hopes of inspiring some younger artists in the school district to return and give back just as Okoye did.
“It’s amazing that Xenith is giving these helmets back to the kids in the school system,” said Okoye. “Just to have a piece of my art history going back to Cass Tech, which is already a legendary school, is the biggest blessing I could ever ask for. I hope this inspires other art initiatives in the community.”