Coworking spaces are the new wave in Detroit: Bamboo Detroit and WeWork are two of the more popular coworking spaces in downtown. But even they do not compare to the new pop-up collaborative outdoor workspaces at Capitol Park titled, ‘Workspace: dEFINED by ALL.’
The nine workspace glass huts were designed by dPOP (Data, People, Office and Places), which designs inspiring workplaces for culture-driven companies. Each hut has a unique design and an overarching theme where the aesthetics and elements of that specific hut range from sunlight to movement and various styles in between. Some huts feature sit-to-stand desks, while others are home to lounge chairs and laptop tables. The glass huts are typically used for the Downtown Detroit Markets in the winter and, spring, and summer months.
This installation is intended for people to get out of their normal working habits, try something new, and think differently about their workspace. dPOP wants the huts to be available for everyone working in downtown Detroit.
“This was actually a great opportunity for us to be in Capitol Park,” said Jennifer Janus, Chief Operating Officer of dPOP. “The huts were going to be open for a period of time where the retailers were coming out of them. We do a lot of research to figure out how people work and what’s the best condition for them to work in and we thought these huts would be a great way to showcase different ways on working and have people give us their feedback.” 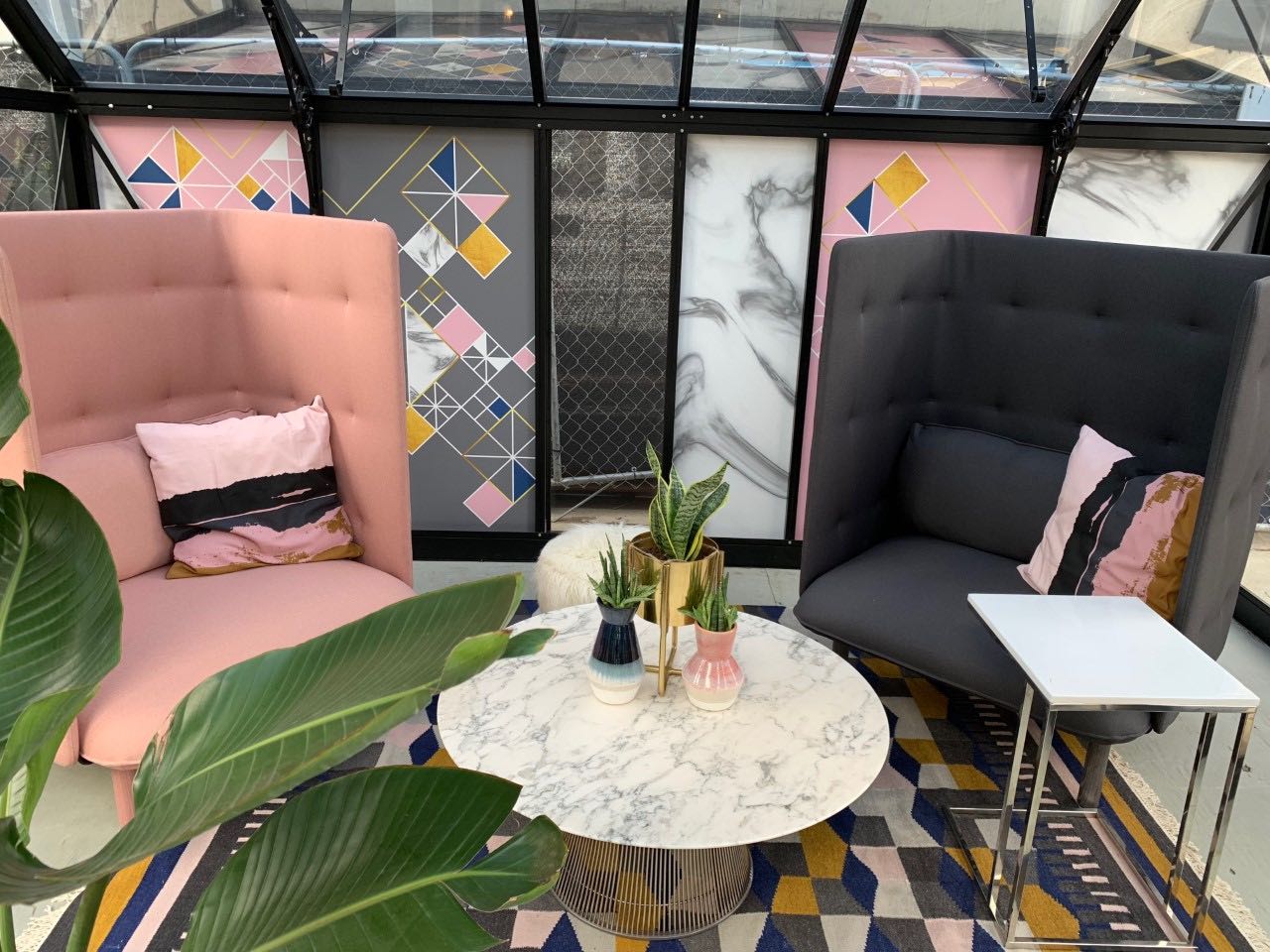 Besides the new workspace huts being outside, they are also free to the public, and open now until the beginning of November 5 from 9-7 p.m. You are not allowed to sleep in them and dPOP asks that you leave the spaces how you found them. Other than that, they want you to work hard and have fun.
Eight of the nine huts are available to the public, while one is for dPOP’s use. Some have office chairs, tables and desks, one has a large whiteboard, and another has two tall, comfortable-looking chairs. What works for one person in a cowork space may not work for another, which is why every hut has its own unique design, theme, and data fact. The themes range from “Be Your Own Boss”, to “Dynamic Duo”, to “Teamwork Dreamwork.”
“We took a look at the materiality of the interiors, the furniture and the biophilia that was added to the space and used that as inspiration to build a visual explanation of coming together and ideas forming,” said Robin Palazzolo, Team Lead of Experiential Design at dPOP. “We had fun with it.”
“Our whole team came together, and we had a really large charrette on it to pick through what kind of different furniture we wanted to offer and the different settings,” said Anna Habig, Design Director at dPOP. “People can go online and vote for their favorite and the why behind it.” 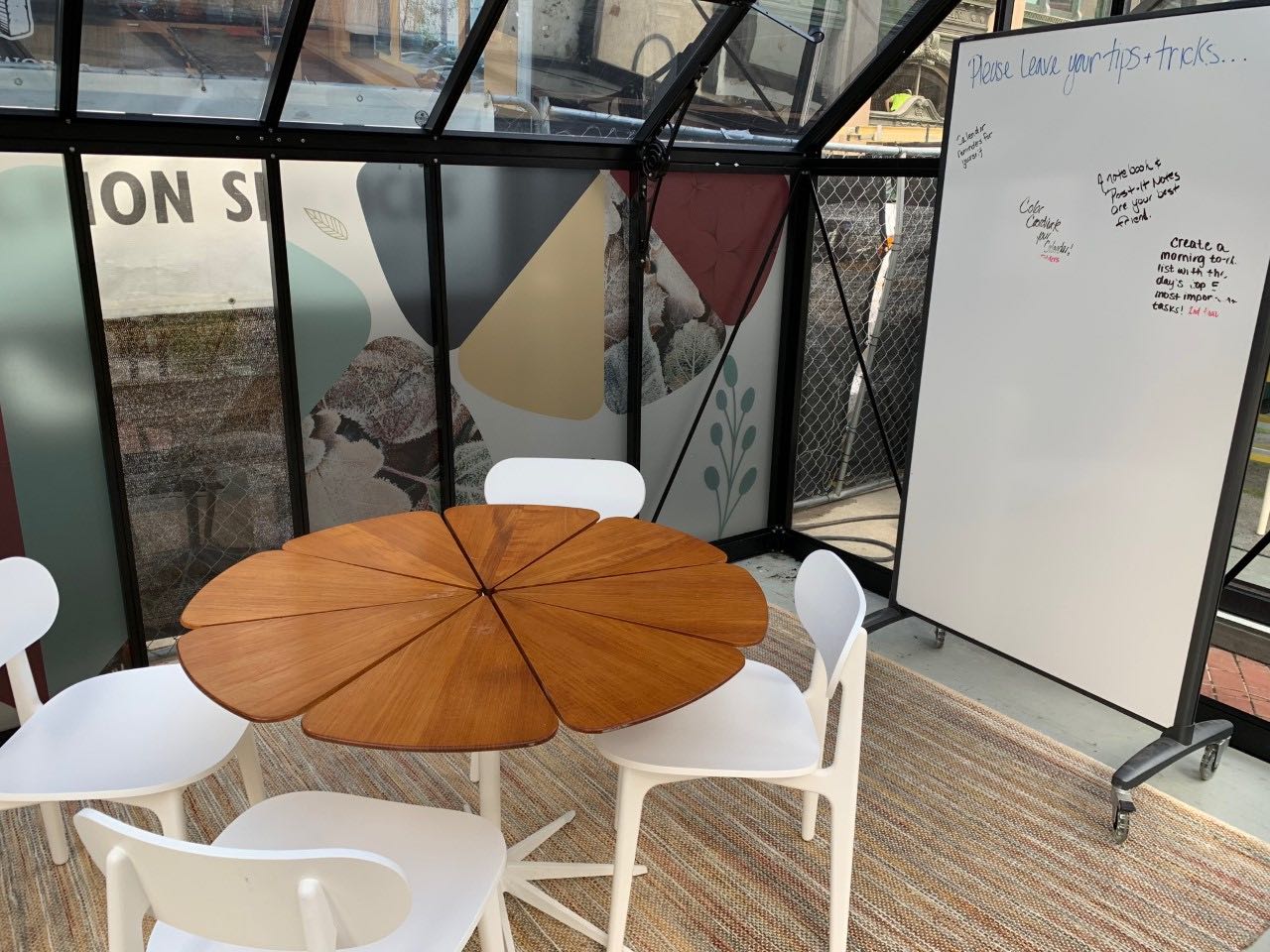 Users of these spaces will be asked to participate in a survey, voting for their favorite hut. dPOP is also working with Density to collect data on the real-time occupancy of each space, furthering the knowledge of how, when, and where Detroiters prefer to get work done.
“Along with designing, we are doing a lot with sensors on the data side,” said Habig. “We want to see how people are using the spaces, what types of spaces they are preferring, whether it be because of the attributes, the plants, or the natural light, and we are working on maybe installing sensors on a few of these huts to see the traffic come in and out of them and other data.”
The Workspace: dEFINED by ALL huts are all equipped with free WIFI and the dPOP team said they are working on getting them heated, if the weather calls for that.
“This is the first time we have done anything like this and we are really excited about the opportunity,” said Habig. “To be able to roll this out at this level in Detroit, we are excited. We’ve already had a few people peeking in and popping in to use them while we were still installing. I think there is a lot of excitement around them.”