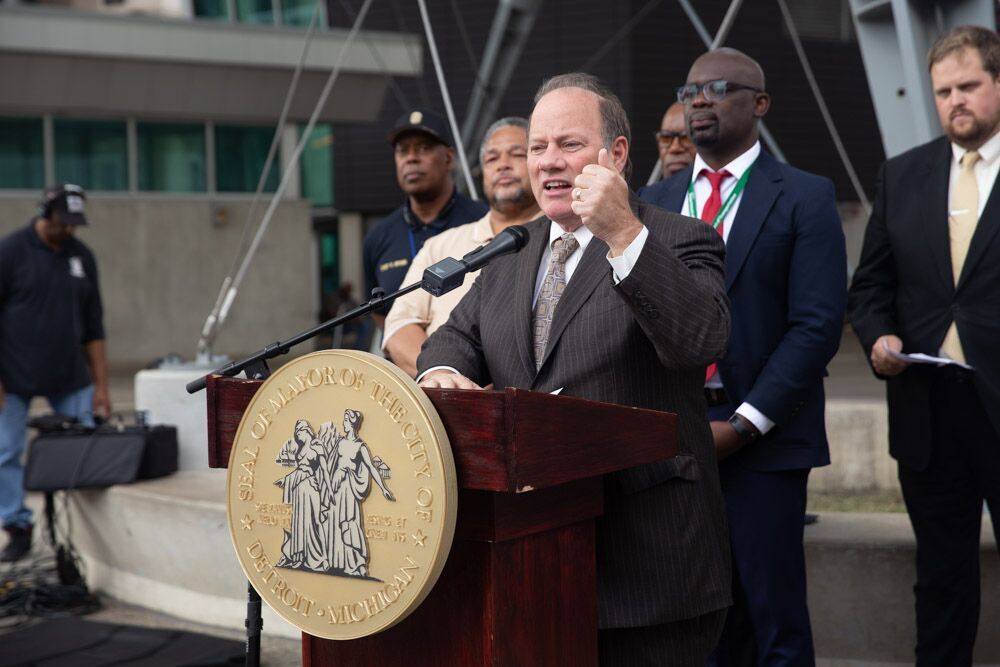 Detroiters pay the highest auto insurance rates in the country and Mayor Mike Duggan is turning to the court system to lower the rates. Duggan filed a lawsuit in U.S. District Court, seeking to have Michigan’s no-fault auto insurance law declared unconstitutional. The law has been in effect since 1973. He is joined in the suit by eight other motorists from around the state of Michigan, who are also plaintiffs, and face financial hardships over auto insurance premiums.
In the suit, against Michigan’s insurance director, Duggan contends that the state’s broken no-fault insurance system discriminates against people of lower income. Under Michigan law, drivers are required to have auto insurance, although countless Michigan residents simply cannot afford to pay rates that are often more than twice the rates charged in other states.
“This law is causing thousands of people across Michigan to break the law by driving without insurance because they simply can no longer afford it,” said Duggan. “Because the Legislature has not shown the leadership to address the issue, we are asking the court to provide residents the relief they need from these unjustifiably high insurance rates.
Duggan said that because of the abuses we have seen of our insurance system by certain hospitals and trial lawyers, no-fault is no longer affordable to hundreds of thousands of Michigan residents and therefore must be fixed or declared unconstitutional.
“I thought it was so obvious that the trial lawyers and the hospitals were ripping us off, that I would have no trouble convincing legislators to have a conscience and fix it,” Duggan said at a press conference at the Rosa Parks Transit Center. “I no longer have faith in Lansing to do the right thing.”
The suit names Patrick McPharlin, in his capacity as Director of the Department of Insurance and Financial Services, as the defendant. It asks the court to require the Governor and Legislature to fix Michigan’s broken auto insurance system within six months. If no-fault is not fixed in a way that guarantees affordability, the suit requests that the court order Michigan to go back to the system that was in place before no-fault was established 45 years ago.
After Michigan adopted the No-Fault Act of 1973, the Michigan Supreme Court ruled that because the state chose to make No-Fault insurance mandatory for all motorists, the state must ensure that coverage is available at fair and equitable rates.
According to the suit, Michigan’s mandatory no-fault automobile insurance system violates the constitutional rights of Michigan’s citizens. Once the state issues a driver’s license, it cannot deprive a citizen of the primary benefit of the license – the ability to drive a motor vehicle – without first providing constitutional due process. Unfortunately, thousands of Michigan residents are denied the ability to drive because they are not given the opportunity to purchase no-fault insurance at fair and equitable rates.
Michigan’s average auto insurance premium of $3,059 is more than double the average premium in Michigan’s neighboring states — Ohio ($1,236), Illinois ($1,158), and Indiana ($1,365); the national average cost for auto insurance is $1,512.
The extremely high cost of no-fault insurance coverage in Michigan is a statewide issue that is felt the most in the Detroit Metropolitan area. More than 50 percent of Detroit workers commute to jobs that are outside the city limits and almost 75 percent of the jobs within the city are held by workers who commute from the suburbs.
Detroit drivers pay an average of $6,197 for auto insurance coverage, four times the national average. Residents of many other Metro Detroit communities also pay exorbitant auto insurance premiums; Dearborn ($5,135), Southfield ($4,443), Warren ($3,446), and Roseville ($3,378).
“It is beyond dispute that Michigan’s insurance rates have become unconstitutionally excessive, unfair, and inequitable,” the lawsuit reads. “Michigan residents universally pay more for auto insurance than do residents of any other state.”
Excessive insurance premiums have a catastrophic impact for many Detroit residents. The average household income in Detroit is just over $26,000, less than half the national average of $55,322, and almost 40 percent of the city’s residents are living in poverty. Financial experts recommend allocating no more than 15 percent of a household budget to transportation expenses, including purchasing a vehicle, gas and motor oil costs, and other transportation costs. In Detroit, adding these basic costs to the average Detroit auto insurance premium would result in nearly $12,000 in transportation costs. For a driver with average income in Detroit, transportation costs would consume more than 45 percent of their total household income.
“I have to catch the bus and it’s not because I cannot buy a car, it’s because I can’t afford the insurance,” said Detroiter Harold Barr, who was waiting to take the Dexter 16 DDOT bus home. “It’s ridiculous what we have to pay here in Michigan for insurance. You don’t want me driving without insurance, yet, you won’t make it affordable for me to buy some. Something has to change, now.”
In the wake of Duggan’s lawsuit over excessive auto insurance rates, he, along with officials from DDOT and SMART announced a proposal that would make ridership smoother for all those who use the two transit systems in the Detroit area. The proposal calls for eliminating transfer fares, adding a mobile payment app, and cutting pass options in hopes of simplifying the transit systems.
“Due to the high insurance premiums in the state, so many people have to catch the bus throughout the tri-county area,” Duggan said. “Until we address the issues of high insurance rates, we have to make sure residents are able to commute to and from work, and wherever else they have to go. We are playing catch-up with the rest of the country.”