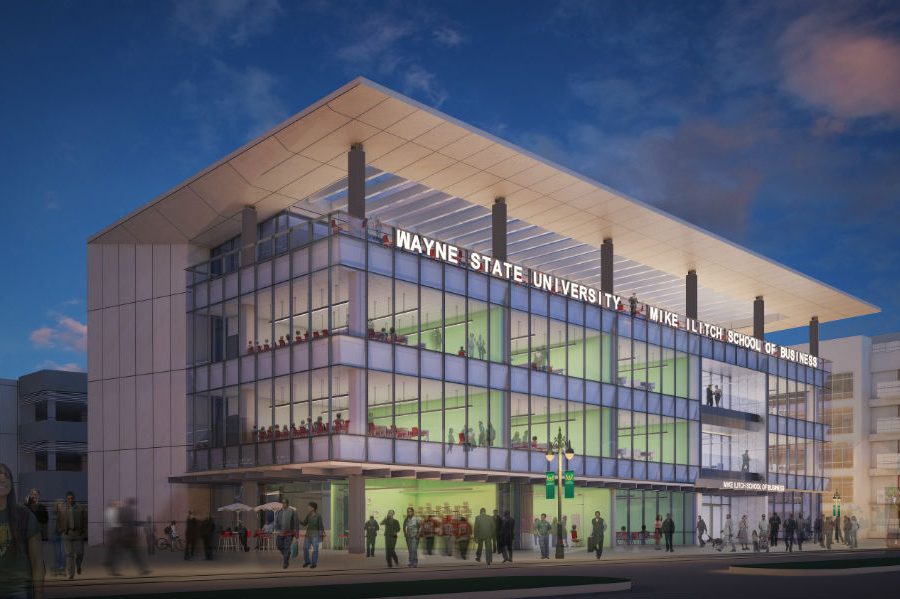 A number of local officials were on hand Tuesday for a ribbon-cutting ceremony at Wayne State University’s Mike Ilitch School of Business building, located next to Little Caesars Arena on Woodward Avenue in Detroit’s Midtown neighborhood.
The new facility was made possible by a $40 million donation in 2015 from Mike and Marian Ilitch, the co-founders of Little Caesars and Olympia Entertainment, and is the largest charitable gift in Wayne State’s history.
The sleekly designed 125,000-square-foot space includes a finance and data analytics lab; a two-story atrium with room for pop-up retail; a 260-seat, state-of-the-art auditorium with a stage large enough to showcase vehicles for auto-related events; and a rooftop terrace.
The Ilitch School is the first university facility to be situated away from the main campus, which is located a few blocks further north. The part of the city the business school is in, called District Detroit by developers, encompasses a 50-block area between downtown and Midtown.
“This gift from my parents came directly from their hearts,” said Chris Ilitch, the couple’s son and the president and CEO of Ilitch Holdings, during opening remarks at the ribbon-cutting ceremony. “The Mike Ilitch School of Business helps fulfill my parents’ dream of a bustling Detroit for everyone.”
Describing his parents’ approach to innovation before Mike passed away in 2017, Chris said that his father always “kept a playful and curious mind” and wasn’t afraid to test outrageous ideas. “Mom helped sift out the ideas that were perhaps before their time,” he added with a laugh.
In the three years since the $40 million gift was announced, Wayne State officials say graduate MBA enrollment has increased by 65 percent, and total business school enrollment has increased by 30 percent; with more than 4,000 students, it’s the university’s second-largest school. Wayne State has also created new programs in sports and entertainment management as well as entrepreneurship and innovation at the business school since receiving the Ilitch funding.
The new building will officially open to students next week, when the Fall semester begins.