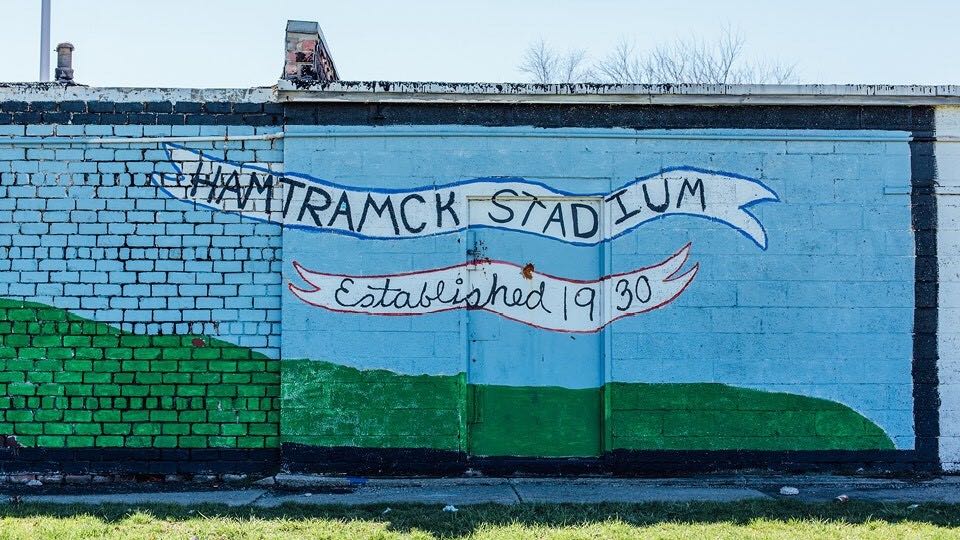 Historic Hamtramck Stadium is one of a few Negro League home ballparks still in existence. It was last used by the Detroit Stars Negro League team in 1937. The Hamtramck Stadium field is currently being used for cricket, soccer, yoga and other recreational activities but the condition of the diamond itself is not suitable for baseball. The grandstands, which have not been used since the 1990s, are currently closed to the public. But that is about to change.
Comerica Bank and Friends of Historic Hamtramck Stadium (FHHS) announced Comerica Bank as the first corporate sponsor for the stadium’s renovation. The announcement was made during the Negro Leagues Legacy luncheon Friday at Comerica Park. Comerica presented a $20,000 check to FHHS during an on-field ceremony before Sunday’s Detroit Tigers Negro Leagues Tribute game at Comerica Park.
“Hamtramck Stadium has played a significant role in the history of the region. As one of only a handful of remaining Negro League ballparks, the site is an important reminder of African-American history here in metropolitan Detroit and across the country,” said Michael T. Ritchie, President of Comerica Bank-Michigan. “We’re honored to support this project and we hope our commitment inspires other organizations to help preserve this historic stadium and for the community to enjoy and remember the contributions of great Negro League players like Norman “Turkey” Stearnes, Josh Gibson, and Satchel Paige for generations to come.”
“The Stadium represents one of five remaining locations where major Negro League teams once played home games and represents a historic period in the Detroit community,” said Gary Gillette, President and founder of Friends of Historic Hamtramck Stadium. “As a field that’s welcomed at least 18 members of the Baseball Hall of Fame in Cooperstown, Hamtramck Stadium deserves the preservation efforts and attention it’s beginning to receive. We look forward to completing this project for both the Hamtramck and Detroit communities.”
Hamtramck Stadium was built in 1930. The Stadium was home to the Negro National League Detroit Stars in 1930-1931 and again in 1933. The field was also home to the Detroit Wolves of the Negro East-West League in 1932 and to the Negro American League Detroit Stars in 1937. The Stadium was acquired by the City of Hamtramck in 1940 and renovated in 1941 by the Wayne County Road Commission. It was also the home field for Hamtramck’s 1959 Little League World Series champions.
Comerica’s sponsorship of Historic Hamtramck Stadium aligns with the bank’s other initiatives in Detroit, including sponsorships at Comerica Park, Little Caesars Arena, Ford Field and Detroit PAL’s new headquarters and athletic facilities at The Corner Ballpark presented by Adient. Comerica Bank previously supported FHHS in securing and installing a Michigan Historic Marker at Hamtramck Stadium and worked with the Detroit PAL to restore a former baseball diamond at Calcara Park to a playable field for area youth.
In 2017, the Friends provided the historical research used by the City of Hamtramck to obtain an African-American Civil Rights Grant from the National Park Service worth $50,000, hiring Detroit-based architect SmithGroupJJR to draw up renovation plans.
“I think it’s important that we preserve our history in our community,” said Larry Bryant, Senior Vice-President at Comerica Bank. “We know the important role of the Negro League in this city and as a bank with a history that expands more than one and half centuries, we were really pleased to support these efforts. We know the money won’t be enough to do all that needs to done, but we hope our donation inspires other companies to follow suit in donating.”