Part of the Neighbors series which is taking a glimpse into the lives of the residents of the Dexter/Davison District, Northwest Detroit, and Southwest Detroit neighborhoods.

Every Sunday morning from 1969 to 1975 my dad would awaken his family for a full day of church. We would drive
west on Davison Ave. to 14th Street, to LaSalle Blvd. and finally to Linwood Ave. I can still remember Davison before the freeway. I crossed Davison to get to Davison Elementary. When the hole was dug for the freeway, we
played down there. The sights along the drive to church excited me. As a 10-year old boy I marveled at all the locally-owned businesses along Linwood and the stately grand homes throughout the neighborhood. I was proud of my city, Detroit.
Our Sunday ride to church ended at the Shrine of the Black Madonna located at 7625 Linwood St., where a majestic painting of the Black Madonna and child stands as a symbol of black pride and dignity. 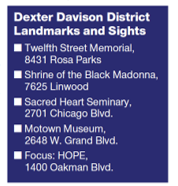 It was one of the area’s religious institutions that stood strong as a source of empowerment and inspiration. Over the years my feelings about the area have gone from, “Wow, look at that!”— to “Wow, what happened?” The businesses that fed us, dry-cleaned our clothes, and kept our hair well-groomed are gone. Many of those stately homes are skeletons of themselves. Or gone. Empty, sometimes trash-filled lots, fill spaces that was somebody’s home.
Linwood Ave. bounded by 12th St, Dexter Ave., W. Grand Blvd. and Oakman are perhaps best known as the area hit hardest by the 1967 rebellion. Since 1967 the area has struggled with its identity as it sought to rebuild neighborhoods and hold on to lost memories. Underneath the veil of rebellion, hope remains.
Despite the devastation that wreaked havoc on numerous blocks, a vitality remains there still. The Boston Edison historic district – once home to the likes of Henry Ford and Berry Gordy– still offers some of the city’s most beautiful homes. Focus: HOPE, an outgrowth of the rebellion, offers job training, education and other services to people from throughout the city. The Joseph Walker Williams Recreation Center welcomes seniors and youths to the community gathering spot. The Motown Museum attracts thousands annually from all over the world, and has big plans for expansion. Deeply-rooted houses of worship still offer hope and inspiration for residents in and outside the community.
Yes, the Linwood, Davison, Dexter community – like many in this city — is challenged.
But the roots of this community run wide and deep.
I’m still a proud Detroiter.
In the coming months, I intend to get up-close and personal with the people and places that continue to make this community thrive. And explore the challenges and obstacles that block our way.