The timing could not possibly have been better. Nor could the location.
“Art of Rebellion: Black Art of the Civil Rights Movement” is a must-see exhibit currently showing at the Detroit Institute of Arts scheduled to come to an end on Sunday, October 22. Valerie Mercer, curator for the General Motors Center for African American Art, said that there have been more than a few instances where visitors to the relatively small exhibit actually broke down and cried after the experience. That would explain the small box of tissue available near the end of the exhibit next to the wall full of comment cards.
“The exhibition definitely touches people,” she said. “One of the things I can share with you is that, probably a few weeks ago? Our security officers, a couple of them were telling me that there are people who cried by the end of the show. So they started off asking me, ‘Have you seen the box of tissues?’ And I said, ‘Oh yeah, I saw the tissues and I was wondering did somebody forget their tissues? But it really is because the officers who are stationed in the exhibition said they really needed tissues. And so the person who puts them out, one of my colleagues, when I talked to her about it she said she was on her third box. So it just goes to show you it really touches people. I think especially Detroiters. And some of the young people have never seen this before. I think it’s such a wonderful learning vehicle.” 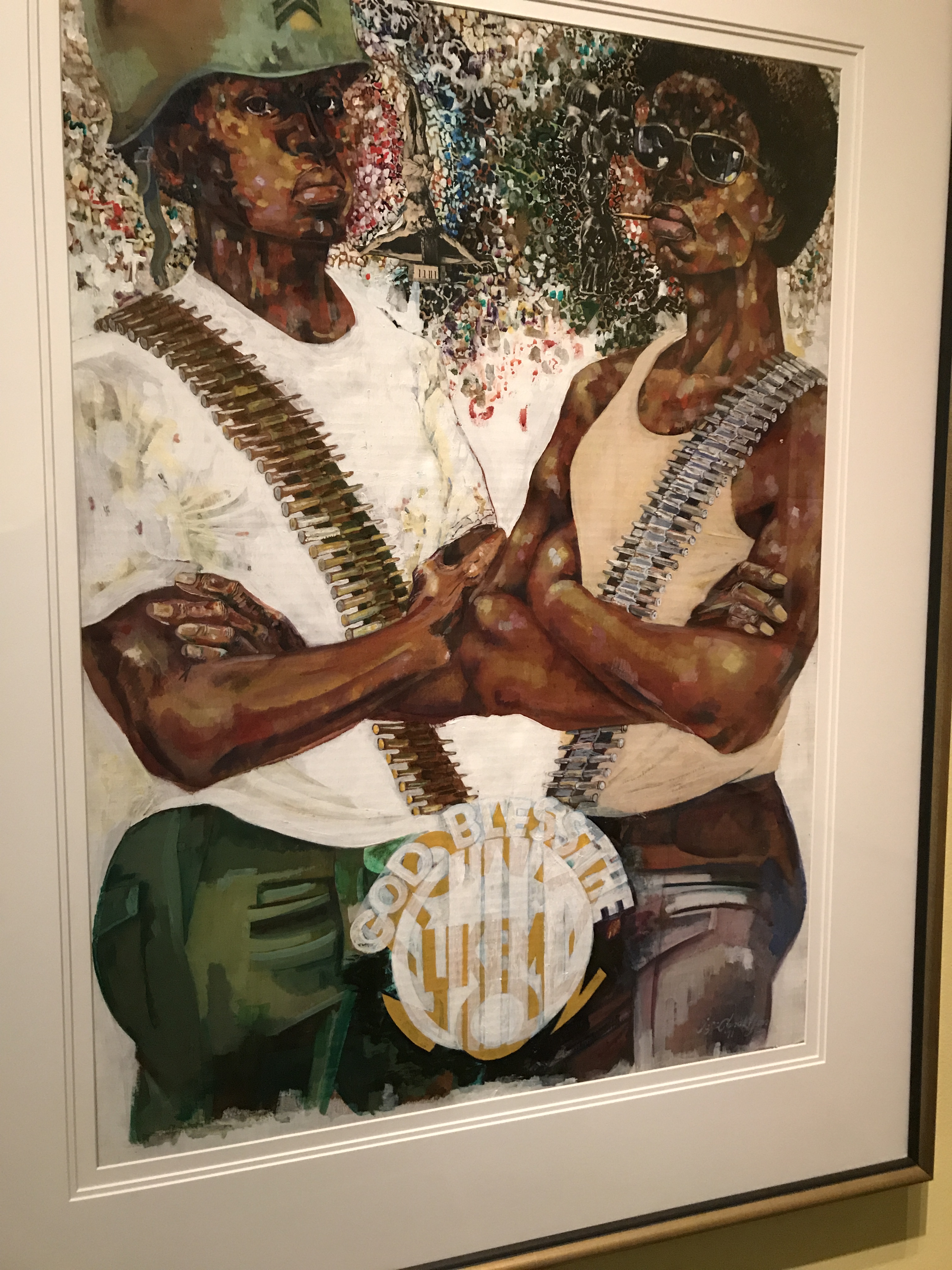 To display such powerful, socially conscious and politically relevant works of art – there are 34 pieces in total – during the anniversary year of the 1967 Rebellion is somewhat of a masterstroke. Because art is such a powerful aspect of social protest, as well as an essential part of telling our story – and our history. Mercer emphasized how important she believes it is for Detroiters to experience the exhibit for themselves. Although the range of artists come from around the country, which is a good thing, there are some notable Detroit artists on display. The portrait of local activist Helen Moore, entitled “Queen Mother,” captures not just Moore’s fearless countenance but her battle-hardened spirit as well. It’s the sort of portrait that grabs your attention by the throat whether you want it to or not. Kind of like Helen Moore.
“We want people to realize that these rebellions took place all over the place during the ‘60s and the ‘70s,” said Mercer. “The show is really significant for the DIA because we haven’t done an exhibition like this on African American artists who focused on racial injustice and the period of the civil rights movement. And so we’re very happy with the response we’ve received from critics as well as our viewers, regular audience, and new audiences.
“The exhibit is really significant as well because we wanted to participate in the Detroit ’67 Project led by the Detroit Historical Museum. So we partnered with the Charles Wright Museum to work together on focus groups and an advisory committee that we shared and that was all very helpful. But the Charles Wright Museum, the DIA, and particularly the GM Center have been wanting to work together for some time and it finally happened.”

The popular exhibition, which was featured on PBS News Hour and in major international and national publications, is free with museum admission. And admission is free to the DIA for residents of Wayne, Oakland and Macomb counties. And this is a free show you do not want to miss, Detroit.
The exhibition features paintings, sculptures and photographs, mostly by African American artists working both collectively and independently in the 1960s and 70s. Artists in the collectives created art for African American audiences that asserted black identity and racial justice and, situated within the story of these collectives, is the Detroit rebellion of 1967. 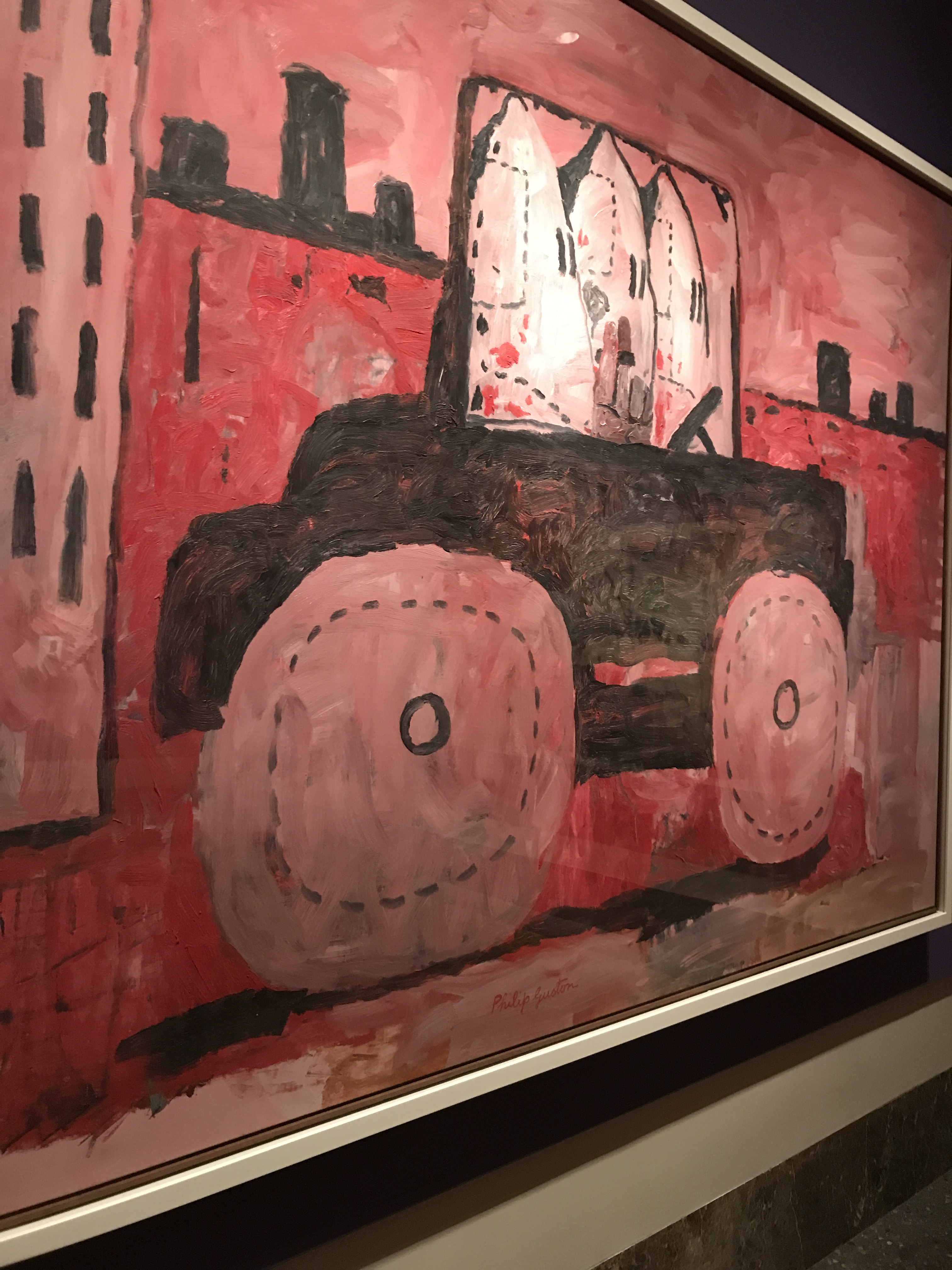 Also included are works by artists who were not part of a collective and artists working in later decades who were inspired by art from the Civil Rights Movement. Artists like Philip Guston, a white Jewish American whose portrait of three Klansmen cooped up in a car is something that, like most works of art, must be seen to be experienced.
“At some point during the mid-60s he was a very successful abstract expressionist, and the critics loved him. Then he started doing this kind of stuff, and he did a whole series on the Klansmen. …This one kind of looks like three clowns in a car. But there’s a whole series of them that he did, and the art world was so mad at him for having abandoned [his earlier style]. But the interesting thing about him is his family background. He grew up hearing stories of family members who were from the Ukraine. And they were Jewish. So they suffered under the pogroms that were initiated toward Jews. And so earlier family members had fled Ukraine, went to Montreal, and some years later he was born. So it just makes sense to me. He grew up hearing these stories, and then reading in the paper about the Ku Klux Klan. There were artists who were not African American who wanted to express solidarity.”
The exhibition is organized by the DIA and is in collaboration with the Charles H. Wright Museum of African American History, which organized the complementary exhibition, “Say It Loud: Art, History, Rebellion.”
“Often [these artists] are more known in their communities, and also generations of artists do know of their work but many of them did not receive attention from the mainstream art museums. But now they are, which is wonderful.”