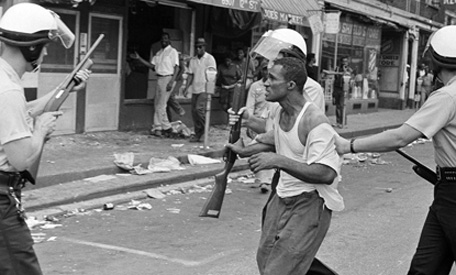 Seems like just about everyone worth a quote is weighing in on this, the 50th anniversary of the Detroit ’67 Riot/Rebellion, and that’s probably a good thing because attention must be paid. More importantly, lessons must be learned. Because, as the saying goes, those who don’t learn from history are doomed to repeat it.
And as would be expected, much of what is being said is being said repeatedly. We can’t afford to make those mistakes again. We still have a long way to go. We have come a long way. Race and racism has defined Detroit. And, of course, so many memories shared from so many who not only remember but simply cannot forget what it was like during that terrible time. The pain. The terror. The violence. The rage.
All of this is important, especially at this juncture in Detroit’s history. Because now, as Detroit is said to be on the comeback trail, and as so many corporate and political leaders appear to be coming together unlike at any other time in this city’s history to rebuild one of America’s most important cities, Detroit has a unique opportunity to get this right. Perhaps a more unique opportunity than any other city in the country.
In past columns and editorials, I have made a point of raining on the parade of the Resurgent Detroit. I admit this was unapologetically on purpose, because it is obvious to me that this is way too early in the show for applause. And anyone who is even vaguely familiar with the city’s statistics knows this. You don’t applaud when nearly half the citizenry is functionally illiterate, or when more than a third of the citizenry lives in poverty. You don’t applaud when you have a public school system that is aggressively failing our children. OK, so maybe you don’t have to wait until the job is done before starting to clap – if such a thing can ever be considered ‘done’ – but at least hold that applause until the finish line is in sight.
Detroit is in a unique position to share the wealth of its comeback – once that comeback truly happens – with the majority of its population and not just the fortunate few. Not so much because of the goodness of anyone’s heart, or as a result of their well-meaning intentions, but because the city’s demographics make racial and socio-economic reconciliation a necessity of future survival, let alone prosperity. In short, we will truly either rise or sink together in Detroit. There is very little middle ground available, if any. Detroit’s downtown and Midtown area could all be gold-plated and it still would not be capable of generating enough revenue from within the confines of those precious 7.2 square miles to sustain the rebirth of the rest of the city. All of Detroit has to succeed for any of Detroit to succeed in any truly sustainable manner.
Detroit was once perceived to be the city that other cities only dreamed they could be. But then the city blew up in the summer of 1967 (for the third time, if you count the riot that took place outside Ossian Sweet’s house in 1925 after he dared to buy a home in a white neighborhood, and then the bloody race riot of 1943), and the lie of that glorified perception was laid bare for all to see.
But unlike in 1925 and 1943, after 1967 the city never quite recovered. Indeed, the abandonment of Detroit started more than a decade prior to the Rebellion when white residents began leaving the city, and after the Chrysler Freeway destroyed the vibrant black neighborhood of Black Bottom and Paradise Valley, its business/entertainment district.
Today, 50 years later, Detroit has the opportunity to become the city that the rest of the country (and much of white Detroit) thought we were a half century ago. We have a chance to finally face up to the past, and then use that knowledge to build a future that actually works. One build on truth and reconciliation, not on the lies and fairy tales that too many of us like to keep telling ourselves.
Maybe it’s too much to hope for. But then if we don’t hope for and work toward the best, what do we have left?