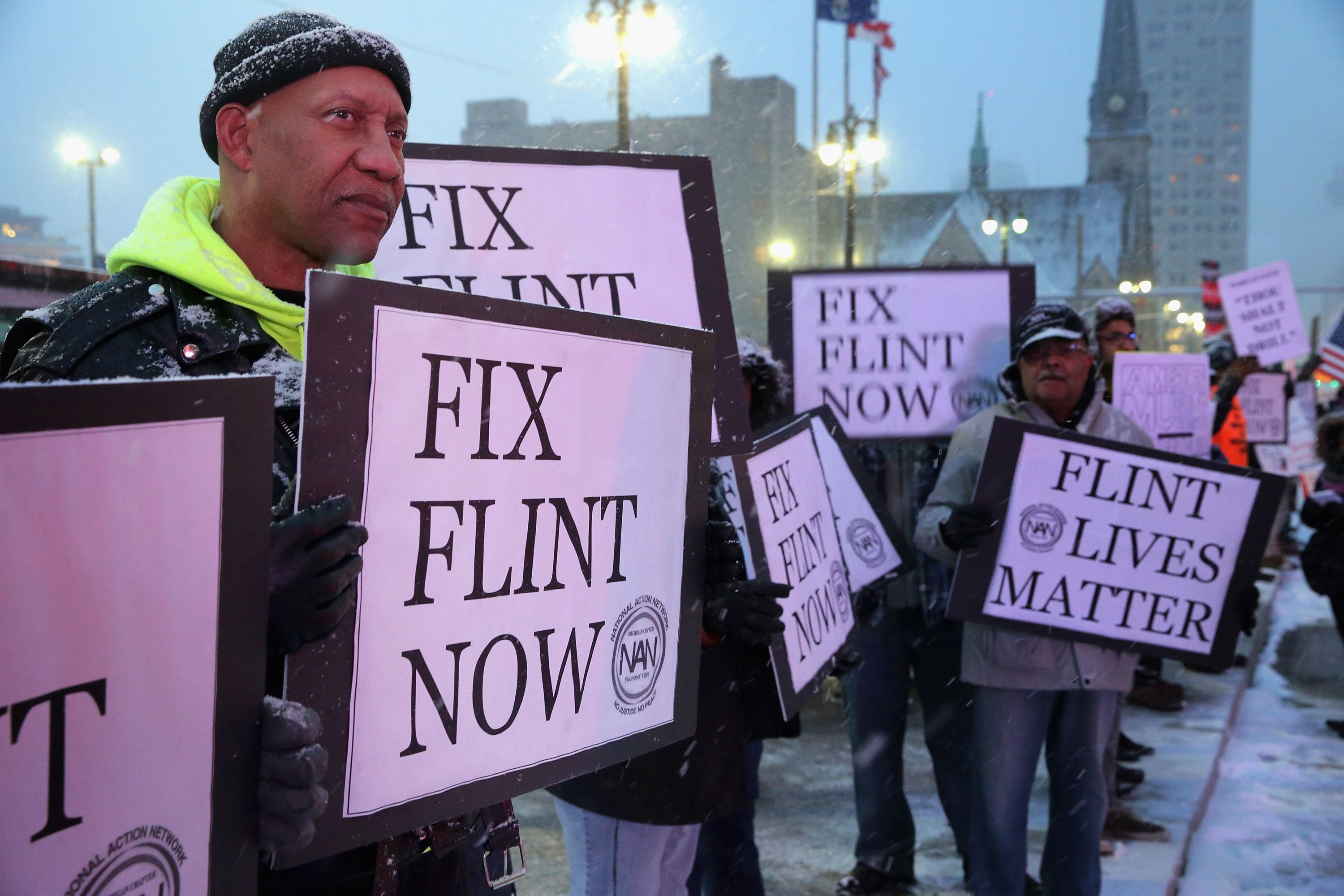 When involuntary manslaughter charges were filed last week against five people connected to the Flint water crisis, prosecutors presented a chilling chronology of events they claim led to 75-year-old Robert Skidmore’s death from Legionnaire’s Disease in 2015.
In charging state DHHS Director Nick Lyon, the highest ranking public official charged so far in the Flint investigation, prosecutors laid out a stunning and sad tale of neglect and incompetence that they say caused Skidmore’s death.
But in sketching the story of the death of Skidmore—one of at least 12 people who fatally contracted the rare, pneumonia-like disease after Flint, under the control of a series of state-appointed emergency managers, switched its water source to the Flint River in April 2014—the prosecutors’ documents also raise two disturbing (and as yet unanswered) questions:.

In considering the first question, one has to remember that Lyon headed the Department of Health and Human Services and, unlike officials with the city and the Department of Environmental Quality, had no authority over how Flint received its water.
When Flint, under the authority of a Snyder-appointed emergency manager, decided to move to the Flint River and a city water treatment plant dangerously unprepared for the complex job of making the river water safe for municipal use, Lyon wasn’t involved. And so when the use of the river water resulted in dangerously elevated levels of lead leaching into the water of homeowners from old plumbing and infrastructure, Lyon had no apparent reason for attempting to ignore or cover-up the Legionnaires’ outbreak.
Why would he potentially put himself in the line of legal fire for attempting to sweep the crisis under the rug if he had no responsibility for creating the crisis?
Whatever the answer, Lyon has earned the trust and support of Governor Rick Snyder, who said in a video statement that Lyon, despite the seriousness of the charges leveled against him, is committed to helping Flint residents recover from the crisis and will remain on the job.
Now, for the second question—which goes to the failure of Attorney General Bill Schuette and his team to interview Gov. Snyder as part of what we’ve been told is an ongoing investigation.
Schuette, during a press conference last week, said only that his investigators had been unable to interview Snyder. Following that announcement, one of the team of attorneys representing Snyder at taxpayer expense said the governor had actually agreed to be interviewed, but only if an investigative subpoena compelling Snyder to testify under oath was issued. He added that his client had never been served with such a subpoena.
Despite repeated phone calls seeking clarification, the Attorney General’s Office has declined to say if the characterization by Snyder’s lawyer is accurate, and if it is, why a subpoena had not been issued to compel Snyder to answer questions under oath about what he knew, and when he knew it.
Snyder claimed not to have known about the outbreak until more than 18 months after health officials began expressing concerns about Legionnaires’ Disease. The charging documents offer no evidence proving otherwise. But, at the same time, they offer evidence that the governor’s office was aware of the outbreak within months of its discovery. The epidemic would claim the lives of at least 12 people and cause dozens more to fall ill.
Even though health officials began seeing a dramatic spike in Legionnaires’ cases as early as June 2014, just two months after the ill-fated switch to the river, the public would not learn of the outbreak until Gov. Rick Snyder addressed the issue in January 2016. At the time, Snyder said he’d just been made aware of the outbreak and the likelihood it was connected to use of the river as Flint’s municipal water supply
However, it is alleged in the just-filed charging documents that by October 2014, Liane Shekter-Smith, an official with the Michigan Department of Environmental Quality’s water division, began expressing concerns that DHHS “would announce the Flint River as the source of the Legionnaires’ Disease outbreak.” Shekter-Smith, who, like Lyon, has been charged with involuntary manslaughter, allegedly informed DHHS epidemiologist Corinne Miller that Snyder’s office had already become “involved” in the issue at that point.
There was good reason for the governor’s office to be concerned. Miller, who cooperated with investigators after entering into a deal that allowed her to escape felony charges and plead no contest to one misdemeanor charge of willful neglect of public duty, observed that “if the Flint River was the cause of the disease, it would be bad or embarrassing for Governor Snyder because that decision [to switch to the river] had been made under emergency management.
[Former Flint emergency manager Darnell Earley was among the five people just charged with involuntary manslaughter last week. He’d previously been charged with other felonies related to his alleged role in the crisis.]
By April of 2015, with the outbreak becoming one of the largest known to have occurred in the U.S. within the past decade, the situation had grown so dangerous the federal Centers for Disease Control offered to assist the state in addressing the crisis. But that offer was rebuffed.
It is also alleged that, in 2016 Lyon and an unnamed “senior advisor” to the governor met with researchers at Wayne State University and objected to ongoing research into the connection between use of the river and the Legionnaires’ outbreak. After being told that Gov. Snyder was “very unhappy” with further research linking Legionnaires’ outbreak to the use of river water, the “senior advisor” to Snyder “threatened to call Wayne State University’s President Roy Wilson and pull funding” for the research. At one point, after allegedly being told the lack of research into the source of the break could lead to more deaths, Lyon allegedly responded by saying that “they have to die of something.”
As with all the defendants charged with manslaughter, Lyon, through his attorney, has vigorously claimed he engaged in no wrongdoing. Along with the involuntary manslaughter charge, which carries a maximum 15 year prison sentence, Lyon is also being charged with misconduct in office, a felony that has a maximum sentence of five years.
In total 15 state and Flint officials have been charged in an investigation that, according to Schuette, remains open but is beginning to move into the prosecution phase.
Curt Guyette is an investigative reporter for the ACLU of Michigan. He can be reached at 313-576-8346 or cguyette@aclumich.org.