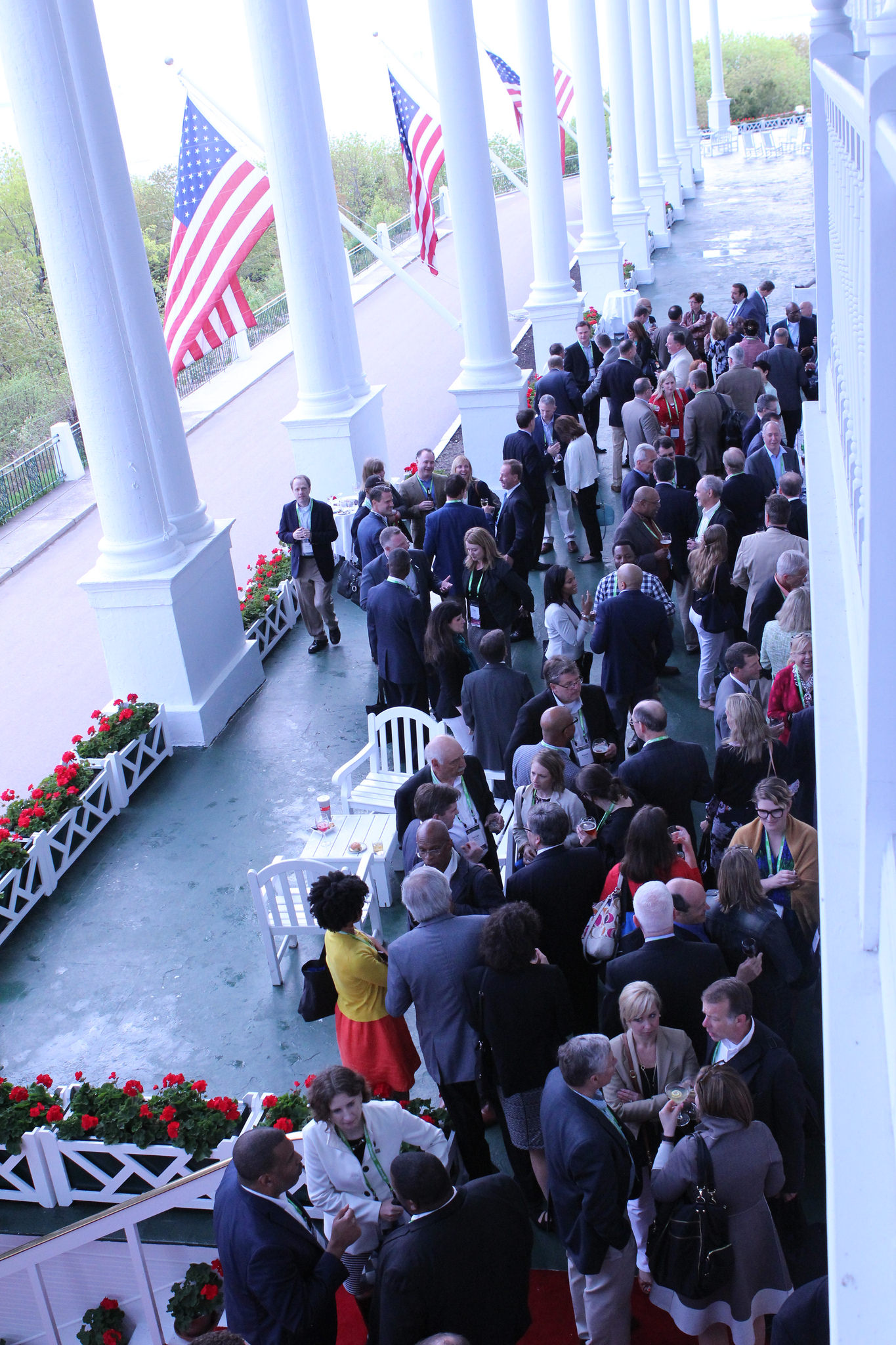 MACKINAC ISLAND — Dealing with the growing talent gap, civility in politics and updating tidings of the Motor  City were themes at the recent Detroit Regional Chamber Mackinac Policy Conference where 1,700 leaders from business and politics migrated north.
“Michigan Matters” Senior Producer/Host Carol Cain and CBS 62 Videographer Paul Pytlowany were there and had exclusive  one-on-one conservations with  leaders  there during the annual confab held on Mackinac Island.  (That “Michigan Matters” Mackinac special will air 11:30 a.m. this Sunday on CBS 62).
Among those appearing and some highlights:

Politics was center stage during the conference with a few  panels held at the Grand Hotel focused on civility.
“We picked that topic before Donald Trump was elected,” said Tammy Carnrike, COO of the Detroit Regional Chamber. “We could see how things were going and wanted to make it a conversation.”
Cain moderated the Chamber’s Congressional Panel featuring Democratic Congresswomen Debbie Dingell and Brenda Lawrence and Republican Congressmen David Trott and Fred Upton which appears in the “Michigan Matters” special too.
Cong. John Dingell, who is married to Debbie Dingell, is the longest serving congressman in U.S.  history. He was in the audience.
That panel, which was standing room only at the Grand Hotel’s Theatre Ballroom, and focused on what’s ahead in the effort to change  the Affordable care act which John Dingell had a hand in getting passed.  There was also talk about the need to protect federal funding for the Great Lakes and President Donald Trump’s imprint on local and national politics.
* Sen. Debbie Stabenow appeared at the Chippewa Hotel/Pink Pony Restaurant where WWJ Newsradio 950, Michigan News Network and  CBS 62 held a reception for invited guests.  Some “Michigan Matters” interviews took place there as well inclulding Stabenow’s. She talked about the importance of the Soo Locks and need to protect the Great Lakes. She is facing re-election in 2018 which is already heating up.
* Detroit area business woman Lena Epstein, who was Co-Chair of Trump’s Michigan Campaign, is running again Stabenow. She talked about her message and why she think’s Stabenow may be  vulnerable.
* Michigan Republican Chairman Ron Weiser and Democratic Party Chairman Brandon Dillon also talked about  revving up for the 2018 mid-term elections and getting their messages out to Michiganders. On the heels of the 2016 President election, which saw Donald Trump win Michigan, the road ahead will be interesting for both parties.
* Lt Gov. Brian Calley focused on his time left with Gov. Snyder and his political future. Calley spotlighted a part-time legislature ballot proposal and staged a march in front of the Grand Hotel with Lena Epstein and a few dozen people carrying banners in support of it.
*  Sen. Gary Peters was laser focused on protecting  the Great Lakes which has 20-percent of the world’s fresh water supply. He also mentioned the importance of manufacturing and the defense industry .
There was much conversation about  Pipeline 5—which runs underneath the Mackinac Straits and carries 23 million gallons of oil and natural gas each day.
*  Ryan Duffy, spokesman for Enbridge, which owns Pipeline 5, talked about why it is  safe and highlighted their regular inspections of the 64-year-old pipeline.
Also appearing in the show:  Kelly Rossman McKinney, Jim Lively, Chris Shepler, Mark Hackel, Mark Davidoff, Matt Elliott,  Lisa Lunsford, Mark Schlissel, C. Roy Wilson, Lou Anna Simon, Steve Arwood,  Tim Herman and Tim Smith.