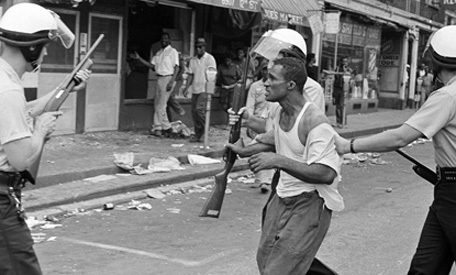 Mary Jarrett Jackson, the first female deputy police chief in Detroit history – and the first female chief of any major department in the world – who was appointed by Mayor Coleman Young in 1986, was already a veteran of the Detroit Police Department when she got the nod for the promotion. After applying for a position on the DPD in 1957, she was hired one year later in 1958. This means that by the time Young had been elected as the city’s first black mayor in 1974, Jackson had already been toiling away inside the belly of the beast for close to two decades.
Wayne State University Police Chief Tony Holt was a black youth of only 17 years when the city erupted into chaos, but much of what he saw and experienced during those five days, and in the ensuing years, made him believe that the best way to make things better for the next generations was to become a police officer himself. He has been the police chief since 2008. He has been an officer for 40 years.
In their own words, because they tell their own stories the best, two of Detroit’s finest recall their experiences from an earlier Detroit that dramatically shaped their lives and careers.


CHIEF ANTHONY HOLT
Holt always wanted to join the force, but he graduated college when he was 20, and you could not join the DPD until you were 21. So to bide his time, he took a series of other jobs straight out of college.
“You won’t have a lot of people tell you this, to be honest, but people were being rejected, African Americans, if you had your wisdom tooth in, or sometimes you might break your finger and it doesn’t heal right, but it doesn’t have anything to do with your physical performance as a police officer? You were being rejected. So it was not a big recruiting effort to bring African Americans onto the job.”
Holt joined the force in April, 1977. Although there was racism there as well, he noted that the atmosphere was not as bad as with the DPD.
“When you came to Wayne State police the education level was much higher. And the university was a diverse area. But the area we patrolled was always the south side of campus. And we saw the difference in the attitudes of police officers. If you talked to police officers who joined the DPD in ’75 or before, they will tell you it was a very difficult time. When STRESS was out there, there was a white squad and a black squad. Cop cars were not integrated. White officers would flat out say they would not work with black officers.”
At WSU, “We were probably the second unit in the country to require a bachelors degree. So everybody had a degree, but it was not bias-free at all.”
When Holt joined the Wayne State Police, “there were a total of three black officers. No officer in a command position. No officer in a division like investigations or plain clothes or anything.”
Reflecting on the times surrounding the ’67 rebellion, when he was still a youngster, Holt said,
“The justice system was not looking at people with an open eye. It was very shaded. They were just picking you up, locking you up and putting you in the precinct. And then when you had Judge [George] Crockett go to the 10th precinct, I’m not sure which precinct, and held court right there. Bring people out and arraign them right there, and then release people. I’m pretty sure it was Judge Crockett who went to the precincts and said I’m a judge, and I’m gonna hold hearing right now. And had all these people released, because they were just being detained.”
“They were locking people up in the elephant house on Belle Isle.”
“The difference in police work today, is you will be challenged. You know, when I was coming up, police officer told you to stand still you stood still. I can remember sitting on my porch and watching a police officer pull over two cars with a total of about eight people in them. It was strictly about fear. They would tell you, ‘if you do this, you’re gonna get shot.’ That fear of a police officer, people call it a lack of respect, but it’s not. To get respect you have to give it. And I think that fear of police officers is not there now. Especially with the younger generation. If I see these kids about to fight, I tell them to come over here, they say ‘why?’ And they’ll come over, but they’ll come over at their own pace. They’re gonna send you a message, I am not afraid of you.”