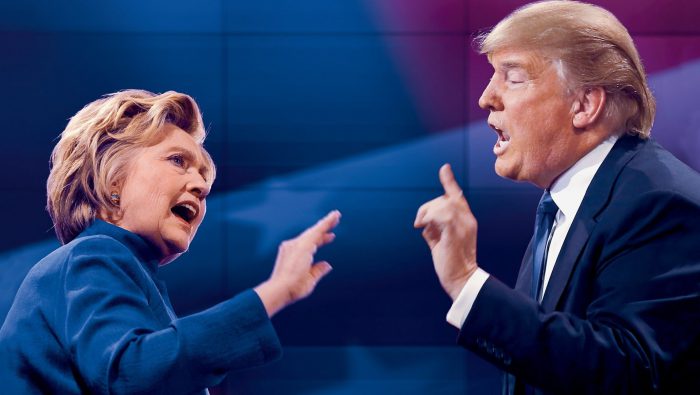 Donald Trump stayed calm and measured for about the first 10 minutes of the debate before he could no longer contain his inner bully. Hillary Clinton countered with reasonable facts and figures, sometimes to her benefit and sometimes not quite so much as she worked to remain decent in the face of an adversary who is anything but. However, as the debate rolled on, Hillary Clinton’s steady command of the facts and of the issues won the night as Trump folded into Rumpelstiltskin mode and devolved into full meltdown.
An early sign of the crack in Trump’s facade began when Clinton hit her adversary hard on his questionable business record, bringing up his numerous bankruptcies, and reminding viewers of the many times when he stiffed his own workers hired to work on his own projects. She even made it personal, talking about Trump’s life of privilege and reflecting on her father, a small business owner, who she said she was glad had never been employed by a Trump project where the workers were not paid.
But as the night wore on, Trump’s lack of preparedness, combined with his thin skin, began to make for an increasingly uncomfortable night for the Republican contender. When it got to the point where Trump incredulously asserted that he had performed a great service for the nation, and even for President Obama, by forcing the President to produce his birth certificate, it was rather clear that Trump was starting to unravel. As one commentator said after the debate, Trump just ran out of gas.
Perhaps part of the reason Trump began to unravel is because, for the first time since he announced his candidacy, Trump finally encounted a moderator, Lester Holt, who wouldn’t allow him to run away with the show and who repeatedly insisted that he answer an actual question. Although some have criticized Holt as not being forceful enough in restraining Trump, that criticism is not quite accurate. Early on in the debate Trump did get away with elbowing and shoving his way through, but that tactic proved far less effective as the night progressed. And sometimes it appeared as if Holt figured it might be better just to sit back and let Trump hang himself with his own long rope, which he did more than once. This was also the first time Trump met Clinton face-to-face, and it obviously was a bit more difficult doing battle with Clinton when she was standing on stage next to him.
Whether it was discussing foreign policy or the potent issue of race relations in America, Clinton’s answers were clearly more well thought-out, and she also did a better job of actually answering the questions.
Perhaps the most outrageous and hilarious point of the night came when Trump said that his best feature was his temperament, after which he put on display one of the most bizarre temperaments ever displayed by a Republican – or Democratic – presidential nominee. Later, Trump whined that Clinton had not been nice to him with her mean-spirited TV ads, even though he claimed he has done no such thing to her. Apparently his repeated reference throughout the campaign to his opponent as ‘lying Hillary’ slipped his mind.
Clinton also managed to skewer her opponent as a follow-up to Lester Holt’s question to Trump, asking what he meant when he said that Clinton did not have a presidential ‘look’. Trump denied saying any such thing. Clinton would not let Trump off the hook, pushing the ‘look’ question to include how Trump has referred to the ‘look’ of various women as pigs, dogs, and worse.
Having said all that, there are still two debates remaining. The final verdict of who the viewers consider to be the winner of this debate will become clear in coming days, but Clinton needs to not simply beat Trump but to beat him decisively, leaving little to no doubt. Because one thing for near certain is that Trump will likely be graded on a curve, simply because much less is expected of him than of Clinton. It should come as no surprise that few minds will be changed among voters who have already identified themselves as pro-Hillary or pro-Trump. At this stage of the game, with only weeks remaining, it’s not abut changing the minds of those whose minds are made up. It’s about the fairly large number of undecideds. I’m guessing their indecisiveness has a lot to do with explaining the huge number of viewers watching the debate. People want to see the candidates for themselves, not filtered through the lens of what a reporter or pundit has to say.
In tonight’s debate, Clinton showed her mastery of the issues, and her depth of experience and knowledge was on full display against a candidate who has coasted thus far largely powered by his cult of personality and a lazy press corps hungry for juicy sound bites, regardless of the content. If Clinton keeps applying pressure through the coming two debates, jabbing Trump’s weak spots such as his business failures, his documented history of housing discrimination and racism, and his continued lies about why he can’t release his tax returns (he says his hands are tied behind his back until the audit is completed, the IRS says Trump is free to release his taxes anytime he wants), Clinton’s lead in the polls will almost certainly hold through November 8 on Election Day.