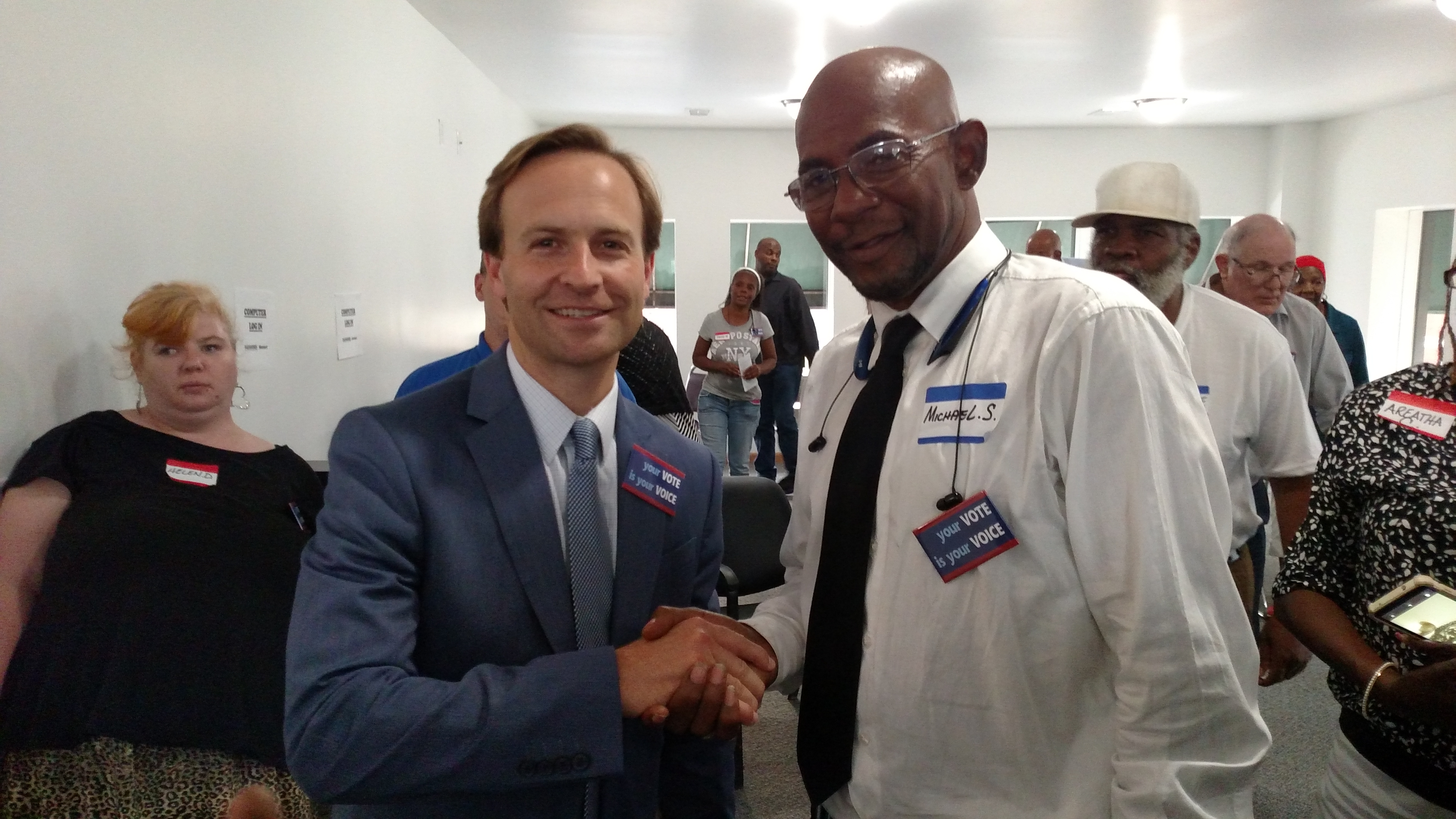 Human decency should trump political ideology.
There is a tremendous amount of human need in Michigan, America and around the globe. People with power can do much good or they can look the other way and use their power to enrich themselves and their cronies and friends.
Power can also sprout from basic human decency and the desire to see value in all human beings. Power and human decency are not mutually exclusive.
Michael Squirewell, who has struggled to overcome much in his life, reached out to a humble, decent man, Lt. Gov. Brian Calley, to invite him to come to Detroit and visit his friends at the Inner City Club House, part of Central Cities Integrated Health Care, serving and supporting persons with serious mental illness. The two men met earlier this year on the lawn of State Capitol.
Michael had nothing to offer the Lt. Gov. Yet, Brian Calley graciously accepted his invitation and came for a visit. The embrace of Michael and Lt. Gov. Calley as they reconnected was genuine and real. Michael came of age in the Brewster Projects in Detroit in the ’60s and ’70s. He stopped any formal education by the third grade. He was a founding member of Young Boys Incorporated, a violent street gang. He was stabbed and shot while an active gang member and witnessed a dozen shootouts and gang murders.
Mr. Squirewell’s life began to change when he came to Detroit Central City, now Central City Integrated Health Care a few years back, homeless, with mental health and substance use issues and with nothing more than the clothes on his back. He credits the professionals and his peers at this Detroit based service community mental agency for “saving my life.”
Today, Mr. Michael Squirewell is adding value and giving back to his community.
Lt. Governor Comes To Town 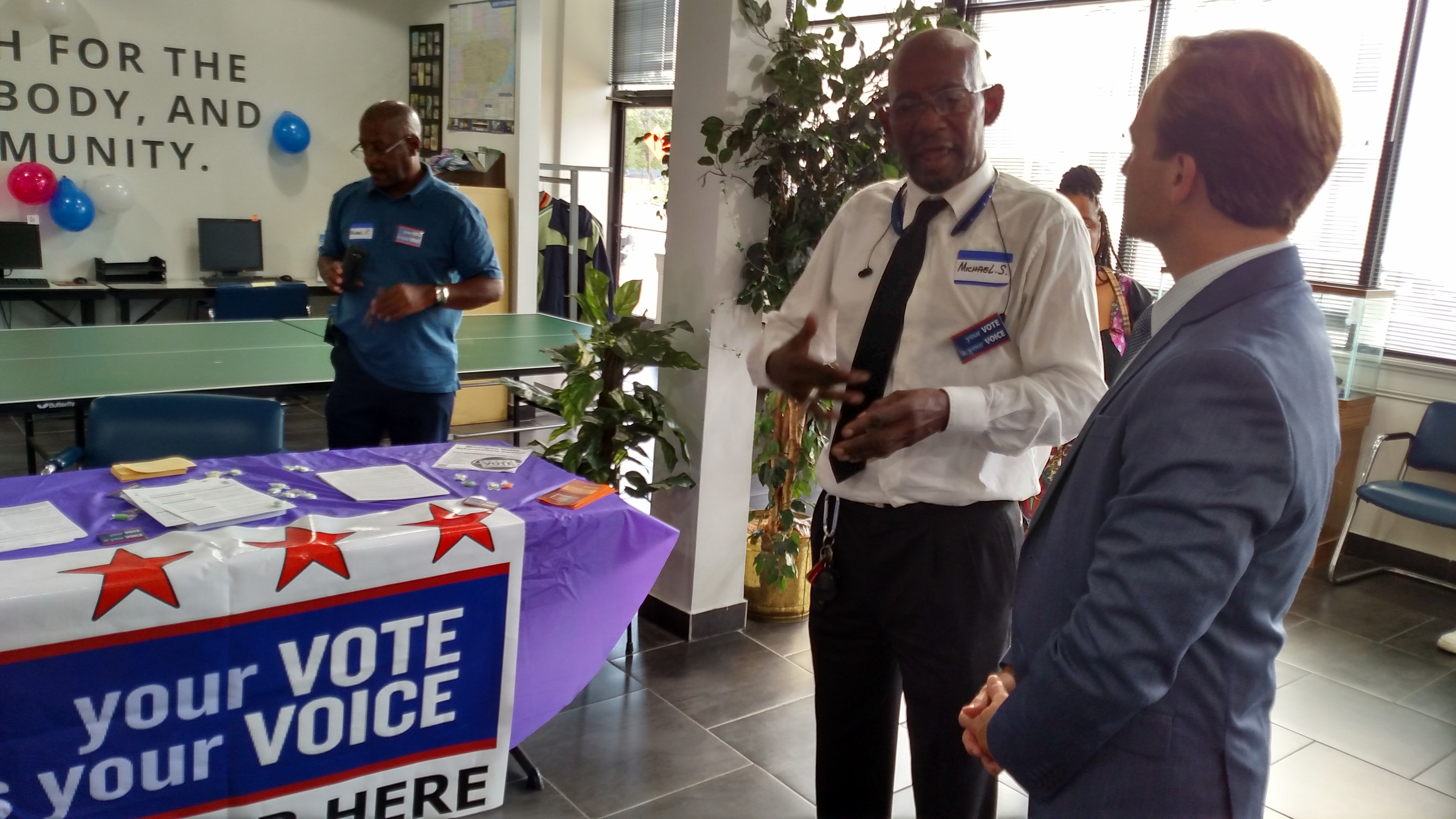 There was no entourage, advance team or press to chronicle the visit as a prop for some future political exploitation. No, it was just two decent, good men meeting, talking, sharing ideas, introducing the man with power, the Lt. Gov., to Michael’s colleagues and friends at a local community mental health program. The program, the Inner City Club House allows Michael and countless others to find a safe harbor and the support so they too can live their lives with dignity.
The day took on the feel of two old friends reconnecting and sharing a good laugh.
Human Restoration
This visit and human interaction was restorative for me. Often the battles in human services are about power, control, ideology, politics and money. Yet, for a an hour or two, Michael Squirewell and Brian Calley were two men who cared — looking for ways to allow others to live an authentic life to give dignity to “the least among us.” The lines of power were blurred as two good men exchanged ideas, laughs and fellowship with others in a humble public mental health facility in the heart of Detroit.
The moment of a genuine embrace of a conservative, Republican, rural, banker, white Lt. Governor and an inner city, African American man who has struggled with serious mental illness crime and substance abuse gave me hope that good can prevail over greed, power and political ideology. Michael proclaimed he and others appreciated the support provided through funds allocated to help persons with mental illness and substance use challenges.
298 Casts a Dark Shadow
In the coming months, the Snyder administration and Legislature will decide how to structure the use of 2.4 billion tax dollars to serve over 300,000 people with intellectual and developmental disabilities,
Substance Use Disorders and Serious Mental Illness. The so-called 298 Workgroup is debating the fate of the public mental health system and the countless family members, neighbors and citizens supported by the taxpayer investment in human potential. A few months ago, the plan was to transfer behavioral health dollars away from the public sector where parents and advocates have input, to the private, profiting making insurance companies to manage.
The Lt. Gov. is not new at striving to do right for persons with a disability or struggling to make it in a hyper-competitive world. His work on improving services to persons with autism, the mental health system by charing the Mental Health and Wellness Commission and jail diversion council and his efforts to hire more persons with disabilities (or different abilities) is legendary. The Lt. Gov is poised to pass legislation to end the barbaric practice of secluding and restraining children at school (a practice if done at home could have a parent prosecuted as a child abuser). Locked Up And Left Alone At School.
Michael gave the Lt. Gov. a pen set as a gift to commemorate his visit to the Club House. Lt. Gov. Calley said to the crowd that he would use the pens they gave him to sign the anti-seclusion and restraint legislation in their honor. Preventing bad things from happen- ing to good and vulnerable people is a hallmark of Lt. Gov. Calley.
A Sign That Good Is On Horizon
Change is inevitable, progress for vulnerable people should not be optional.
We can find ways to build bridges across the entire health care spectrum to lower costs, enhance outcomes and better integrate care. We should blend the best of the private and profit sector with the government and non-profit sectors to advance care. Any new system must be built on a foundation of human decency, person centered planning and self-determination. The human moment between Brian Calley and Michael Squirewell should be enshrined in the decisions policymakers make around “298.”
Tom Watkins is the president and CEO of the Detroit Wayne Mental Health Authority (www.dwmha.com). He has served the citizens of Michigan as state superintendent of schools and state mental health director. Follow Watkins on twitter @tdwatkins88