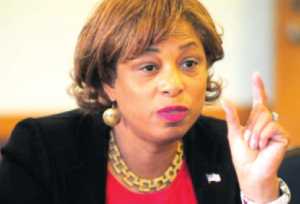 Following his remarks Friday in Dimondale, African American leaders in Michigan are speaking out about just how much Michigan has to lose if Donald Trump becomes president. Hillary Clinton’s agenda to create jobs and expand economic opportunities for everyone, not just those at the top, stands in stark contrast with Trump, who looks out for himself and those like him.

Trump’s policies would do nothing to expand opportunities for all Americans, including the African American community. In contrast, Clinton would build on the progress under our nation’s first African American president to create jobs and by making investments in infrastructure and housing, breaking down barriers for the formerly incarcerated, supporting small businesses and investing in youth employment.

“African Americans in Michigan have so much to lose if Donald Trump is elected as the next president,” said Congresswoman Brenda Lawrence. “Donald Trump does not understand our community or the real issues facing our families. Trump continues to talk at us, instead of talking to us and working with us. Hillary Clinton is different — she listens to us and understands the work that needs to be done to break down the barriers in employment, housing and our schools. I am proud to be an African American woman and I am happy to support someone who understands my black and brown brothers and sisters and that person is Hillary Clinton.”

“Hillary Clinton is a fighter for justice and opportunity,” said Congressman John Conyers. “She has dedicated her life to fighting for equal rights for all of us. Unlike Donald Trump, Hillary Clinton understands the need for rising wages, better schools, and criminal justice reform. Meanwhile, Trump questions the legitimacy of our first African American president’s birth certificate, failed to disavow hate groups like the KKK, and spews hate to incite fear in some Americans. There is so much at stake in this election. Donald Trump cannot become president.”

“Unlike Donald Trump, Hillary Clinton doesn’t just talk, she actually shows up in our communities and gets to work,” said Flint Mayor Karen Weaver. “Hillary has visited Flint and sat down with our families to hear from them and come up with workable solutions. Hillary helped to establish Flint WaterWorks, a jobs program for Flint’s young adults to help distribute clean water, healthy food, nutrition information, and other services to families in our community. She has  released a detailed plan to fight for environmental justice, built off of her thorough understanding of Flint’s challenges. Hillary has been fighting for Flint families — and that is why I am confident Michigan voters will have her back in November.”

“When asked whether the auto rescue was a good idea, Trump said, ‘you could have let it go bankrupt, frankly…’ In Michigan, that would have meant the loss of hundreds of thousands of good-paying jobs, not only among the major automakers but also the many manufacturing suppliers across the state,” said Gerald Kariem, Director of the United Auto Workers Region 1D. “Our state’s economy has made progress since the Great Recession, in large part due to rescuing the auto industry — which Hillary Clinton voted for. This election, Michiganders have a clear choice: do we continue our state’s recovery, building upon the Obama Administration’s hard work, or do we go back to the same failed economic policies that benefit the wealthiest few at the expense of working families — implemented by a man who has shown no respect for American workers throughout his career?”