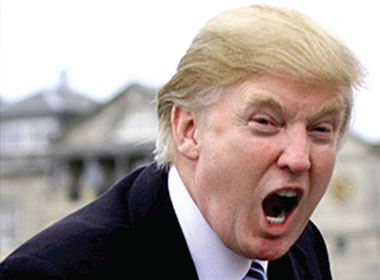 I’m sure Trump’s Republican National Convention speech was a smash hit with the Hitler Youth.

For the longest, I’ve shied away from the comparison that others have been making for quite some time now, namely that the Trump persona bears an eerily frightening resemblance to Adolph Hitler. After all, Hitler was responsible for the extermination of 6 million Jews, whereas the most horrific thing that can be attached to Trump is his flaming gold hairdo and his propensity for blasting the most outrageous and ugly things that he can spew from his pouty little lips.

But for those of you who know a bit about history, you might recall that Adolph Hitler was a bit of a wild-eyed joke in his corner of the Earth too – before he became Adolph Hitler. Germany was in a very bad way, many Germans felt bad about being Germans, when along comes this guy who tells them that they are, in fact, the Master Race. They are superior to all others.

Sure, we’ve been through some terrible times together as Germans, but if you trust in Me, then I, alone, shall deliver you to the heights of your true greatness. We will trample all our enemies underfoot (or just shove them into ovens), and we shall prevail because we are all that is Great and Righteous and White. WE ALONE are chosen to rid the world of all those we deem misfits, those who would pollute the human race with their darkness, their non-Aryan ways.

Fast forward to last week’s Republican Convention speech, and I couldn’t help but shiver. Four years ago, if Mitt Romney had won, I would have been hugely disappointed, and I remain convinced he would have been a terrible president. But we would have survived. Eight years ago, if John McCain had prevailed, the same applies (however, if McCain had keeled over and Sarah Palin took the reins then, well…). Hey, we survived Reagan, and we survived two Bushes.

But a Trump presidency? Prepare for the long descent into night. The following italicized quotes are taken from a draft copy of Trump’s acceptance speech delivered last week at the Republican Convention. The actual speech turned out to be much longer – and much worse.

“On Monday, we heard from three parents whose children were killed by illegal immigrants Mary Ann Mendoza, Sabine Durden, and Jamiel Shaw. They are just three brave representatives of many thousands. Of all my travels in this country, nothing has affected me more deeply than the time I have spent with the mothers and fathers who have lost their children to violence spilling across our border. These families have no special interests to represent them. There are no demonstrators to protest on their behalf. My opponent will never meet with them, or share in their pain. Instead, my opponent wants Sanctuary Cities. But where was sanctuary for Kate Steinle? Where was Sanctuary for the children of Mary Ann, Sabine and Jamiel? Where was sanctuary for all the other Americans who have been so brutally murdered, and who have suffered so horribly?”
Listen closely to last night’s speech, then go back and review past speeches throughout his campaign. Observe the behavior of his followers at many of his rallies, especially when protesters show up. Not just the taunting, but those occasions when protesters were practically stomped into the ground. Then review how Trump virtually, if not openly, encouraged the behavior. At one point, Trump even told his followers that if any one of them ran into legal problems due to how they treated protesters at his event, they could send him the bill and his lawyers would cover the expense.

This is not a man who has any interest in being President of the United States. This is a man who wants to be Führer.

“I have a message for all of you: the crime and violence that today afflicts our nation will soon come to an end. Beginning on January 20th 2017, safety will be restored. The most basic duty of government is to defend the lives of its own citizens. Any government that fails to do so is a government unworthy to lead.”

But because the United States is nowhere near being in the condition that Germany was in during Hitler’s ascendancy, Trump has opted for gross fabrication, for sleight-of-hand on a scale worthy of magician David Copperfield. Because, as the master entertainer that he is, Trump knows all too well that it doesn’t matter how many times you lie, or how big you lie, if the lie achieves the desired result. Think Machiavelli on steroids. Tell the people that their world has gone to hell enough times and it doesn’t matter whether it’s true or not because you have fed into what the sheeple want to hear. The sheeple who embrace their fears so much tighter than any hope they ever had. Because fear requires a savior, and a savior is what the sheeple want.

So Trump’s followers have chosen to live inside “Trump’s America: The Movie” where the immigrants have overrun the borders, crazed negroes are shooting down cops in the streets, America is no longer feared, and whiteness is a fading memory.

“I have embraced crying mothers who have lost their children because our politicians put their personal agendas before the national good. I have no patience for injustice, no tolerance for government incompetence, no sympathy for leaders who fail their citizens. When innocent people suffer, because our political system lacks the will, or the courage, or the basic decency to enforce our laws – or worse still, has sold out to some corporate lobbyist for cash – I am not able to look the other way.”

Trump, and only Trump, can save you from this imaginary looming destruction White America. Only Trump can soothe your aimless rage with an anger that burns even brighter than your own.