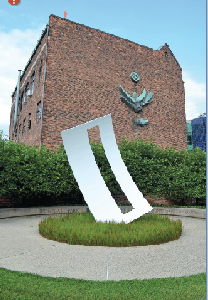 For almost a century, millions of Detroit residents and visitors have passed by the Renaissance styled building at the corner of Farns­worth and John R and speculated about what was happening inside the building shrouded in mystique and speculated on what secrets might be hidden inside. Some thought the Scarab Club was private club, closed to anyone who didn’t know the secret handshake or couldn’t afford the dues, monetary or otherwise.

Many black Detroiters were certain that it was at least a whites-only club at best, or a meeting spot for something more unseemly at worst.

Wrong on all counts. What’s inside the historic building not far from the Charles H. Wright Museum of African American History and just across from the Detroit Institute of Arts is an awe-inspiring collection of arts and crafts in an intriguing setting designed to engage visitors upon entry.

Designed by Detroit architect Lancelot Sukert and opened in 1928, the Scarab Club is listed in the State and National Registers of Historic Places, and houses meeting and gallery spaces, a brick walled courtyard and a meticulously maintained garden.

“The Scarab Club is a long-standing institution in the city of Detroit for people who love and create the arts,” said Scarab Club Board President Duncan Campbell. “We have proudly served in this capacity for the past 109 years and now have our sights set on the future with the goal of introducing the Club and its many programs and services to a wider audience.”

Board member and artist Mariuca Rofick admits that she too had her doubts about what lay inside the walls of the Scarab Club, until she and artist husband ventured inside several years ago. Now Rofick serves as secretary for the club’s 12-member Scarab Club Board of Directors, bringing minority representation to 25 percent. “We didn’t know what we were going to find here, and you can imagine how surprised and amazed we were by all of the beautiful art in this space,” says Rofick.

Formed in 1907 as an informal club and named after its founder, marine painter Robert Hopkins, members met “to promote the mutual acquaintance of art lovers and art workers, to stimulate and guide toward practical expression the artistic sense of the people of Detroit.” 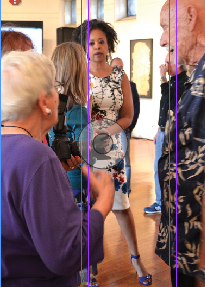 In 1913, the building was renamed the Scarab Club after the Egyptian symbol of rebirth. The group grew steadily and was able to fund and build the current clubhouse, which opened its doors on October 5, 1928. Harbored inside are meeting and gallery spaces, a brick-walled courtyard, a second floor members’ lounge with fireplace, and third floor artist studios.

A registered 501(c)(3) nonprofit organization, today’s Scarab Club serves Detroit’s hub of diversity in art perspectives passionately and with unparalleled distinction, innovation and inspiration. It is a place where artists of all backgrounds can interact, practice their trade and proudly display their work. According to Duncan, what really gives the Scarab Club life is the immense range of programs and activities that are offered to its membership and the community at-large. 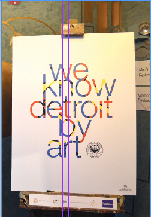 The Club’s activities and programs include:

“These are exciting times for the city of Detroit,” said Campbell. “Our community is making a dynamic comeback and the arts are playing an integral role in that revitalization. The Scarab Club intends to build on that momentum by engendering a period of its own ‘rebirth’ while also continuing to celebrate and support local, regional and national artists.”