The countdown has begun for the 10th annual GM River Days presented by Soaring Eagle Casino and Resort. The Detroit RiverFront Conservancy is thrilled to share the complete national and local music lineup of nearly 50 musicians and bands, including the exciting addition of the Ann Arbor native and blues rocker Laith Al-Saadi. His concert at GM River Days will be his first metro Detroit performance after placing fourth on this season of NBC’s “The Voice.”
Laith Al-Saadi will join a stellar lineup of oth

er national and legendary artists previously announced on the Quicken Loans National Stage, including The B-52’s, SWV, Patti LaBelle, Jeffrey Osborne and Mint Condition. Many local favorites as well as new acts will return to the Michigan Lottery Stage and Chevrolet Stage featuring a mix of rock, pop, blues, alternative, soul and indie rock.
While all GM River Days performances are free with admission to the festival, there are VIP premier seats available for this year’s head- lining performances taking place on the Quicken Loans National Stage. The limited VIP premier seat tickets are selling fast and available to purchase from RiverDays.com/Music. VIP tickets include up close seating options, complimentary non-alcoholic beverages, festival admission, restrooms and access to a cash bar. The VIP tickets cost $35 and proceeds will go towards the non-profit Detroit RiverFront Conservancy.
The 2016 GM River Days presented by Soaring Eagle Casino & Resort kicks off Friday, June 24 at 11 a.m. and spans from the William G. Milliken State Park and Harbor to the Detroit/Wayne County Port Authority Terminal & Dock, just past the Renaissance Center. Fes- tival hours are 11 a.m. – 10 p.m. on Friday, Saturday and Sunday. The Conservancy will charge a $3 admission fee (and $5 after 3 p.m.) to help underwrite programming and operational costs for the festival. Admission to the festival is FREE before 5 p.m. on Friday, June 24. For a full lineup of events, visit RiverDays.com. 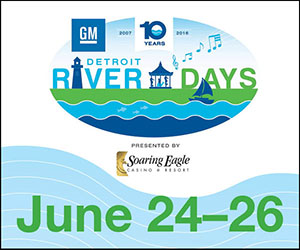