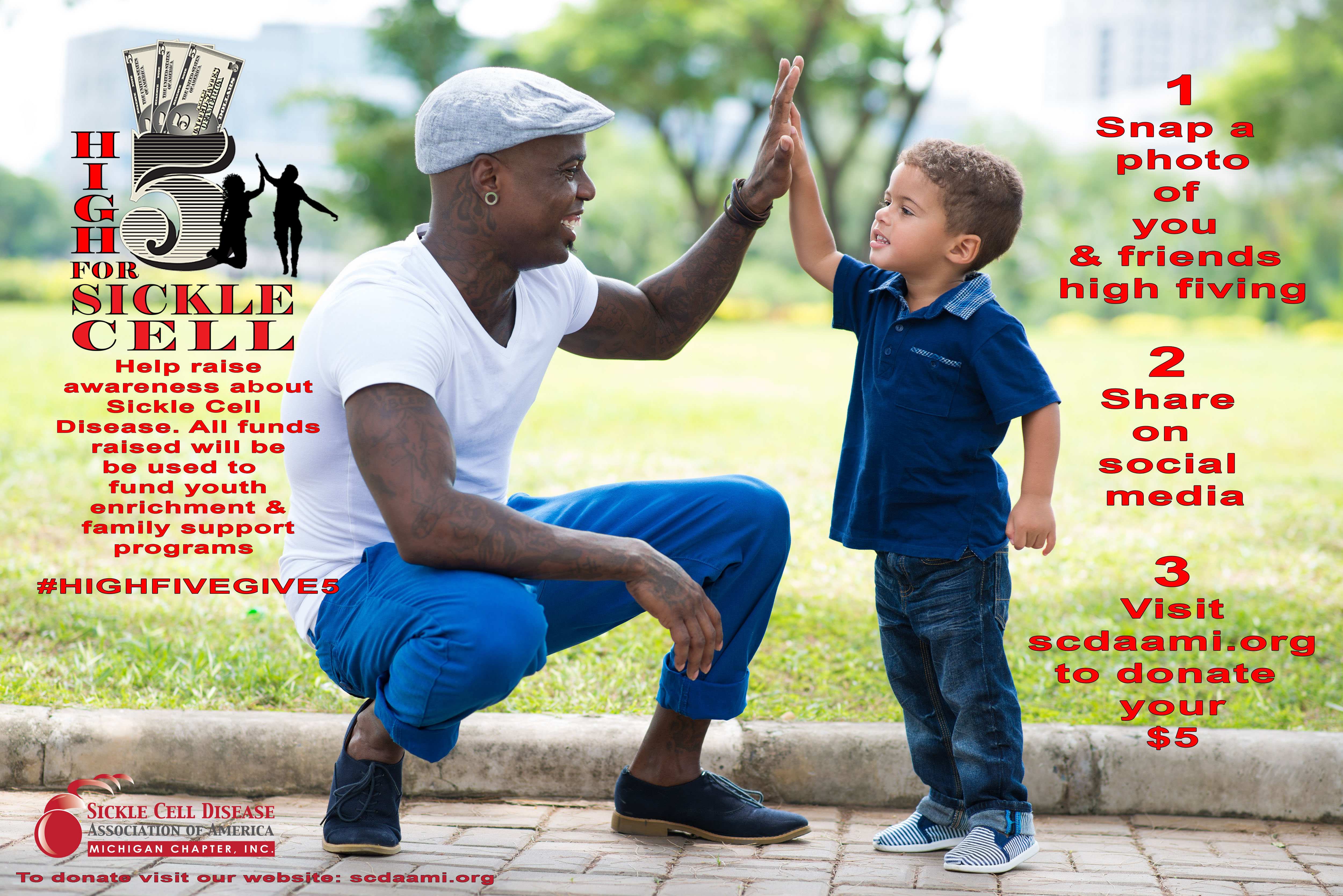 World Sickle Cell Day is June 19, 2016 to advocate, educate and heighten awareness about sickle cell disease, its effect on those living with it and the impact on families. The Sickle Cell Disease Association of America, Michigan Chapter (SCDAAMI) headquartered in Detroit, Michigan is commemorating World Sickle Cell Day with the “High 5 for Sickle Cell” awareness campaign providing education on the five important facts and myths about sickle cell disease conditions in our communities as listed on the attached page. With several programs and activities, the SCDAAMI will host an open house at its location on June 18th from 3-6 PM and the culmination event is on September 10th, when SCDAAMI will host the High 5 for Sickle Cell Walk at the Museum of African American History in Detroit.
Sickle Cell Disease (SCD) is the most common genetic disorder in the United States. The effects of SCD can be devastating with complications including severe pain, anemia, infection and stroke. It is particularly common among those whose ancestors came from sub-Saharan Africa, Spanish speaking regions in the Western Hemisphere, Saudi Arabia, India and Mediterranean countries. In the United States approximately 2,000 infants are born with SCD each year. Infants are tested at birth for this condition so that lifesaving treatment can be initiated.
In Michigan approximately 50 babies are born with SCD each year, frequently to unsuspecting parents who were unaware of their trait status. Approximately 8% of African Americans have sickle cell trait. Outreach efforts are designed to reach as many people as possible to test for sickle cell disease.


The SCDAAMI serves the entire state of Michigan with patient advocates strategically placed to cover 95% of affected individuals. The mission of the SCDAAMI is to:
Dr. Wanda Whitten-Shurney serves is the CEO and Medical Director of the SCDAAMI and has spent 28 years providing compassionate care for children living with sickle cell disease in the Comprehensive Sickle Cell Clinic at Children’s Hospital of Michigan. She serves on the Legislative Committee for the reauthorization of the Sickle Cell Treatment Act and the Medical and Research Advisory Committee for the National SCDAA which was co-founded by her late father, Dr. Charles Whitten, a leader in sickle cell research and medical practitioner. Dr. Shurney was the driving force in establishing the Sickle Cell Donor Program for the American Red Cross of Southeastern Michigan and was recently appointed to the National Heart Lung and Blood Institute’s Advisory Committee for Sickle Cell disease.