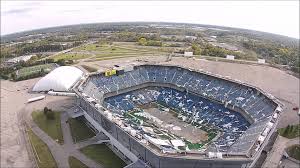 Once home to the Detroit Lions and entertainment events the once frequented Pontiac Silverdome will be no more starting in 2016.

“There are plans to begin demolition on the Silverdome in the spring of 2016,” said Kristie King, a broker with CBRE, representing property owner Triple Investment Group.

The large piece of property failed to sell for the asking price of $30 million. The demolition will make way for new development including office space, store fronts and other commercial buildings.

Pontiac city officials will announce later today the specifics of the development.

“In conjunction with talking to our planners and our professionals and doing our market research, we decided that this was the best use for the area and best use for our site and had the best economic impact for the community around,” said David White, director of special projects for Triple Investment Group.

The stadium was once expected to be used as a destination for soccer games but the vision for the space never materialized. The abandoned structure has sat for an eye sore for years and left many clueless as to what was next for what many consider the city’s most recognizable building.

Triple Investment Group, a Michigan-based company led by a Canadian developer, bought the 127-acre site in 2009 for $583,000 at an auction from Pontiac’s emergency financial manager as the city sought to get rid of its costly, city-owned properties.

“It’s just now a blight and it’s bringing down property values and perceptions of the city, so we would support the demolition of that facility at this point,” said Kyle Westberg, president and CEO of West Construction Services, which has developed properties in the downtown area.

The Lions departure from the area in 2002 led to a spiraling effect of vacancy.

The arena has since failed to land a consistent tenant causing developers and planners alike to speculate on what-ifs and the possibilities if it were to be demolished.