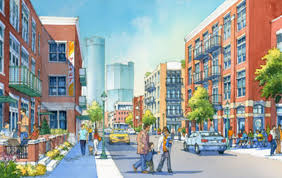 Failed attempt after failed attempt is finally behind Detroit in its effort to reface the east riverfront.
After years of cement silos preventing the public the right to visit, hazardous land and an underdeveloped waterfront – the city has made strides in improving the accessibility of the land mark.
Yet, one thing still lacking on the water front is a number of options for upscale housing to rival the likes of destination states across the country.
“We just don’t have that many options for housing directly on the riverfront like in other cities such as Chicago or Florida even,” said 27-year-old Detroit resident Henry Tucker, who lived in Chicago for two years. “I hope that some housing comes and is here to stay because I know there is a demand for it.”
This grim reality is slated to be no more next year as the latest residential development, Orleans Landing, has officially broken ground. The new 270-apartment complex is expected to cost $65 million and is centrally located between nature and the bustle of the city.
The Detroit River, downtown, Belle Isle and Eastern Market is all just minutes away from the housing units.
Historically speaking, Orleans Landing is not the first project promising attractive housing for Detroit.
The new Water’s Edge at Harbortown is currently taking reservations for its new housing units with monthly rent ranging from $1,500 to $2,000. The development offers 134 units and are expected to be complete at the end of this year.
Despite the misquote, Orleans Landing offers something unique to the riverfront in its location and accessibility.
If memory serves correctly two of the city’s most memorable mayors attempted such a feat. Former mayors Dennis Archer and embattled Kwame Kilpatrick both strategized and made plans to break ground on providing a new look to the riverfront that included housing.
Nevertheless, both failed – mostly due to the lack of public interest and funding. The tide looks to be changing and the city is firmly primed for a new era of housing offerings on its riverfront.
“The riverfront could be the next major neighborhood,” said Eric Larson, CEO of the Downtown Detroit Partnership.
City officials said that over the last decade, $1billion have been invested into he riverfront and still and yet at least another $1 billion in investments is expected over the next 10 years.
Orleans Landing is expected to be complete by the end of next year.