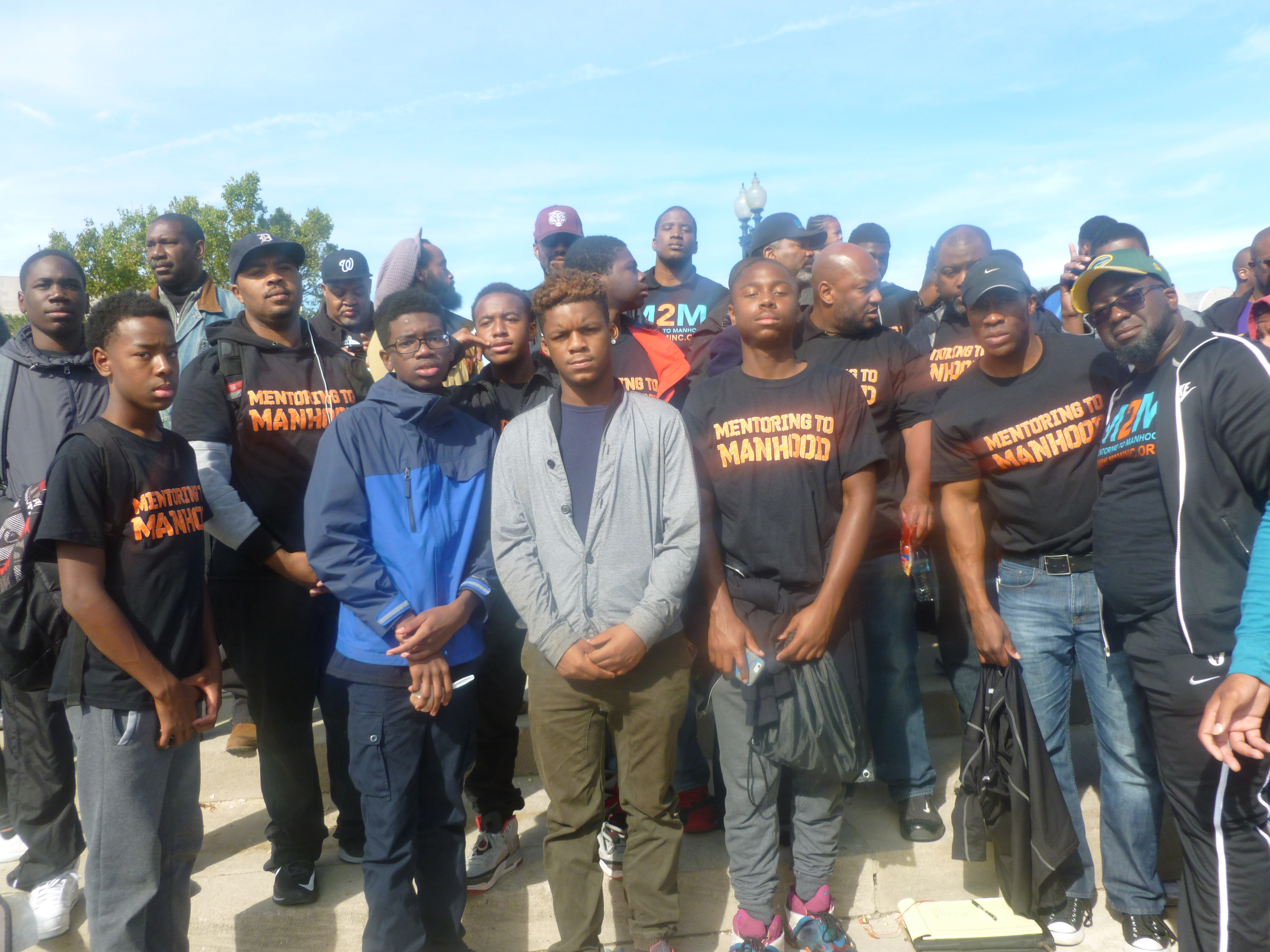 Principal Aaronthomas (cq) Green posed the following question to his school of 300-plus 5th to 8th graders at his all-boys school in northeast Houston at the beginning of the school year.
“What does justice and brotherhood mean to you?” he asked.
Their responses earned 30 boys from KIPP Polaris for Boys a free trip Saturday to the nation’s capital for the 20th anniversary of the Million Man March.  There, they joined tens of thousands who traveled from across America to be at the historic event.
Groups of youngsters came by plane, train and bus from exclusive Sarah Lawrence College in New York, Morgan State University in Baltimore and from public schools in Oakland, Calif., Landover, Md., Houston and other cities.
The Rev. Jummane Bradford, program director for Mentoring to Manhood in the Kentland area of Landover brought a group of young men from his program.
Bradford attended the 1995 march as a Morehouse freshman.  He said attending the march at age 18 was an unforgettable experience for him that he wanted to share with a new generation.
“It is something I cherish even until today,” he said 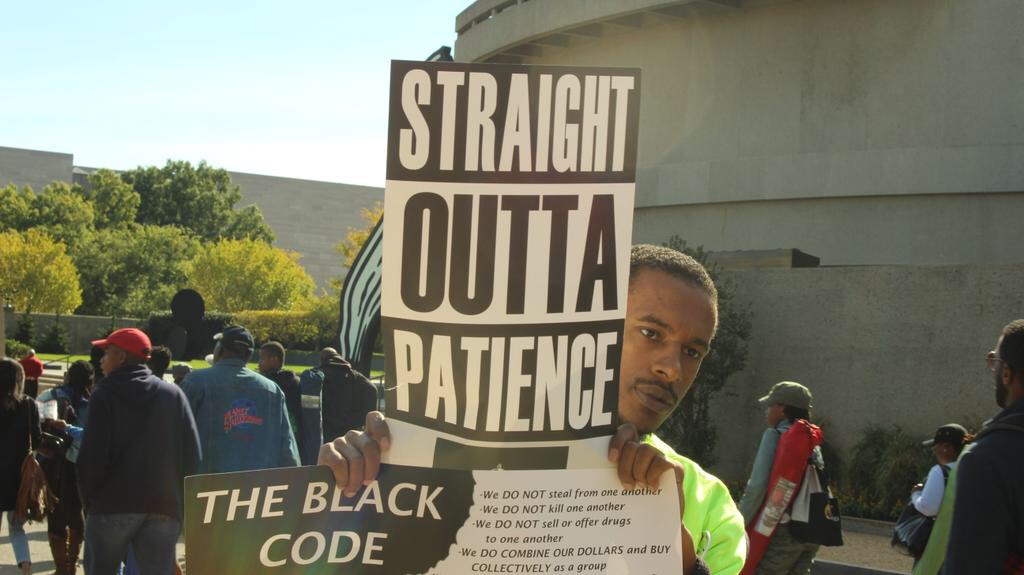 Many of the boys in the Bradford’s program do not have adequate father figures, he said, and needed to see positive examples that Saturday’s march provided.
“I think this event is one that is a rite of passage for our young men,” he said. “Many of the things that they will be seeing here today will solidify what we have already been showing them.”
Roshaude Williams, 18, has been in the program for two years.  Williams said the most important message he learned from the speakers at the march was about developing good character.
“Honesty and being respectful are very important, because they revolve completely around your character,” he said.  “When I have children, I will help them avoid being a part of the nonsense with these lessons I learned today.”
Alexia Lindo, 13, a student at KIPP Bridge Charter School in Oakland, traveled nearly 2,500 miles to be at the March.  She came with 15 other performing arts students.
Alexia, who has two brothers, said she was inspired to come to the march after reading of the deaths by police and a security officer of unarmed black men like Trayvon Martin in Sanford, Fla; Michael Brown in Ferguson, Mo., and Oscar Grant, who was shot to death by a Bay Area Rapid Transit Police officer in 2009.
“I don’t know them personally, but those could have been my older brothers,” she said.
KIPP is an acronym for Knowledge Is Power Program, which was founded in 1994 by two Houston Teach for America instructors and has grown into a network of 183 public schools across 20 states and the District of Columbia.

The program helps underserved kids from pre-kindergarten to 12th grade in the community gain the skills that will allow them to be successful as students and in the real world.
KIPP Polaris in Houston is the first same-sex school in the entire KIPP system,  The school is 51 percent African American and 47 percent Hispanic,  and 79 percent of its students qualify as low income.
Those were the factors their principal said that motivated him and his assistant principal, Marvin Pierre, to bring boys from their school to the march.
“Given that the march really services and speaks to the population that I serve, I really wanted them to see it,” Green said.
To pay for the trip, Green and Pierre launched “Beyond the Hashtag-Building Strong Boys into Socially Conscious Young Men,” a campaign on PledgeCents.com in August. By the time the trip rolled around, the campaign had raised only a third of the $30,000 needed.
Still, on the morning of Oct. 8, and the team headed to the airport and headed to D.C.  Twenty-five the 30 students had never been on an airplane before, which initially proved to be a challenge.
“They needed some airplane etiquette,” Green said, laughing. “If we are getting on the plane at 7 in morning, you are excited, but the people on the plane that fly all the time don’t want to be bothered.”
They visited several sites in the first two days of arriving in Washington, including Georgetown University and the Pentagon, but they said the march was the highlight.
Juan De Dios Diaz, 13, said he was inspired by the speakers to work on being a better student and leader.  He said he eventually wants to attend Texas A&M and study engineering.  He said he also learned the importance of women to the community.
“I learned that you should always respect a woman, because she is someone who gives birth to you,” Juan said. “I don’t consider myself a great leader, but for the kids who didn’t get to experience this, I plan on taking what I learned back to them.
“I define justice as this, ‘If you want to get treated the right way, you have to treat other people the right way. It must be equal to all men.’”
Green said while the march had an effect on his students, it also made an impression on him.
“When I get back to Houston, I want to ensure I am living the mission, vision and dream that was set forth today,” he said. “I want my boys to see that this is bigger than just who they are.
“I want them to answer, ‘What can you do as one individual as a group of 29 others to make your local community better.’”
He said he will also be trying to recoup much of the $11,000 that he and others spent personally to fund the trip and to cover outstanding costs.
“I felt it was worthwhile investment,” Green said. “I believe that it is a positive and necessary thing to do for our young men. They will go off today and make the world a better place.”
Green said people can contribute to the fund at www.pledgecents.com and search for KIPP Polaris.