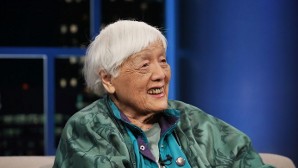 Nationally renowned civil rights activist Grace Lee Boggs, undoubtedly one of the most important and influential revolutionary progressive minds Detroit has ever produced, died peacefully in her sleep Monday morning, October 5, 2015.
For anyone who knows Detroit’s history of radical social activism, and its accompanying long list of critically important movers and shakers in that arena, it is quite an accomplishment to stand out in such bold relief among such prominent company. Upon news of her death, condolences poured in from around the country, even from the White House.
“Michelle and I were saddened to hear of the passing of author, philosopher, and activist Grace Lee Boggs. Grace dedicated her life to serving and advocating for the rights of others – from her community activism in Detroit, to her leadership in the civil rights movement, to her ideas that challenged us all to lead meaningful lives,” said President Barack Obama. “As the child of Chinese immigrants and as a woman, Grace learned early on that the world needed changing, and she overcame barriers to do just that. She understood the power of community organizing at its core – the importance of bringing about change and getting people involved to shape their own destiny. Grace’s passion for helping others, and her work to rejuvenate communities that had fallen on hard times spanned her remarkable 100 years of life, and will continue to inspire generations to come.  Our thoughts and prayers are with Grace’s family and friends, and all those who loved her dearly.”
Nancy Kaffer of the Detroit Free Press described Boggs’ life in the following way:
“Activist, civil rights pioneer, public intellectual and prolific writer, Boggs’ work spanned an era, touching literally thousands of lives.
“For decades, she was a prominent public face of a particularly Detroit brand of activism: A one-time Marxist, the Chinese-American Boggs’ ideological evolution led her to black revolution, black power, neighborhood organization and educational reform. She was an unrelenting critic of the cultural and economic conditions that contributed to Detroit’s decline, with a keen focus on the struggles of the city’s economic underclass. Her fierce intellect was uncompromising, demanding a constant evaluation of ideas and assumptions. Her guidance nurtured generations of activists who continue to play a role in the struggle to define and shape the city Boggs made her home.
“Yet Boggs leaves a complicated legacy. A self-described revolutionary, her life’s work centered on creating a different kind of revolution, one that required not violence, but an expansion of creativity and a constant broadening of the definition of humanity.”
Locally, some of Michigan’s top elected officials also weighed in on the loss of a true heavyweight activist who remained active and thoughtful into her 100th year of life. From Mayor Mike Duggan:
“Grace Lee Boggs was a force for promoting social change, and we were lucky she chose to call Detroit her home. Through
her activism, she fought for civil rights, social justice and income equality. She made Detroit — and the world — a better place.”
Congresswoman Debbie Dingell expressed sentiments on behalf of her husband, retired Congressman John Dingell, as well as herself:
“John and I are saddened by the loss of a friend and true champion for change. Grace Lee Boggs worked her entire life to advance the ideals of justice and equality. She believed at the core that small groups of people working together are the key to bringing about social change, and she inspired generations of Americans to pursue a dream of a society that is more fair and just. Grace left an indelible mark on our community, our state and our nation. We owe her a debt of gratitude, and will forever remember her as someone who brought people together and created revolutionary change – one small step at a time.”