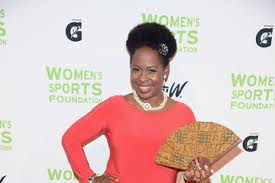 She anticipates that the doors will be opening to her new facility by fall 2016, although her organization is currently looking at the State Fairgrounds and another location as possible sites for construction.

Second of all, Wendy Hilliard is a USA Gymnastics Hall of Fame Member. She was the first African-American to represent the US in rhythmic gymnastics and hold the esteemed title of “Master of Sport” because she personally coached an Olympian in 1996.

She was the first African -American President of the Women’s Sports Foundation. The year 2016 marks the 20th anniversary of her own foundation, which has brought the benefits of healthy athletic competition and participation – in gymnastics as well as other non-traditional sports – to thousands of kids who might otherwise never have had the opportunity.

Third, in the interest of full disclosure, Wendy Hilliard is my sister-in-law.

“What we really want to focus on more is the non-traditional Olympic sports, the things where kids can really make an impact and that are not usually offered in the city,” she said. By ‘non-traditional’ sports, Hilliard lists boxing, wrestling and fencing as examples, although there will also be room for some of the more traditional such as soccer and basketball.

If there is one thing Detroit needs more than downtown development – as great as that is – it is more programs and activities for Detroit’s young people.

“Basketball and football are so competitive. So when students are exposed to non-traditional sports there’s more opportunity to move up faster” than in the big sports. “And you may also find kids that may have specific talents. It’s about exposure.”

Hilliard said that she was motivated to make the expansion last year when she participated in Detroit Homecoming 2014 as one of many successful Detroiters who have left the city and are interested in giving back to their hometown. She will be returning for this year’s Detroit Homecoming from September 30 through October 2. Hilliard said she was particularly sensitive to how many of the discussions focused on the revitalization aspect of the city with a heavy focus on downtown but without much consideration of what is needed for the city’s youth, or of how essential their needs are to that revitalization thing everyone keeps trumpeting.

“I said, you know, Detroit is such a great sports town, how much are they really doing for the youth?’ And the neighborhoods? I mean, you can revitalize the city but the kids have to do things. You can’t forget that.”

Just as an example, imagine what a difference it could make if a hockey rink were built in one or more of the city’s neighborhoods? The new Joe Louis Arena promises to be quite spectacular, but don’t the neighborhoods and the city’s children deserve spectacular too?

“It would make a huge difference. You want kids to participate. You need to put facilities in the communities. I’m a product of the Detroit Recreation Department. They hired these four Russian coaches, and all of the sudden we had this great gymnastics team. So it’s not rocket science,” she said.

“It made a big difference in the pride of the city in the program because we were one of the two best teams in the country. That investment really made a huge difference. It inspired me to keep doing community gymnastics. The impact was so long-lasting and it was a result of the investment in great coaching and the access to facilities.”

What concerns Hilliard in the current public school environment is how much has been lost, and how athletics seems to have been pushed aside as a non-essential component of education when, in fact, it is easily as essential as mathematics, science, or writing. The result has been more overweight youngsters who are diagnosed with illnesses such as diabetes.

The other result has been the creation of an atmosphere that has made athletics accessible only to the children from more privileged families who can afford to pay the steep fees now often required to participate in a privately sponsored athletic activity, whereas in years past it was a regular part of public education. Youth sports has become a very profitable industry, and Hilliard strongly believes that is not the way it should be because she knows her own career may never have taken flight in today’s environment.

“You have to educate kids how to take care of their bodies. And that comes from participation in athletics,” she said.

Hilliard was an Olympic Sportscaster and Broadway performer. She also was the Director of Sports for the NYC 2012 Olympic Bid. In 1996, she founded the Wendy Hilliard Gymnastics Foundation (WHGF) which has provided free and low cost gymnastics for over 15,000 urban youth in New York City.

More than 400 local youth participate in WHGF programs in New York every week. One of the WHGF athletes, Alexis Page, is now at Howard University, after achieving National and International Gold medals and travelling the world on the U.S. National Rhythmic Gymnastics Team.  Last month, nine members of the WHGF Competition Team qualified and competed at the U.S.A. National Gymnastics Championships in Fort Worth, Texas where many of the athletes scored in the top 10 in their categories and age brackets.   The gymnasts are local Harlem residents between the ages of 8 and 20.

Hilliard writes about children and youth sports on her website at www.whfny.org.