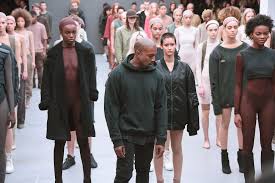 Kanye West is an even busier man nowadays.
Arguably, the face of Adidas – West most recent slew of clothing has been finally revealed by the man himself today during a New York Fashion Week show. This season’s designs are slightly different than his first attempt at creative pieces.
The award winning artist also released a track that has yet to be confirmed as a single on his upcoming project.
The track is reportedly titled I Feel Enslaved, and samples the Motown classic I’m Losing You by The Undisputed Truth and Hardrive’s Deep Inside.