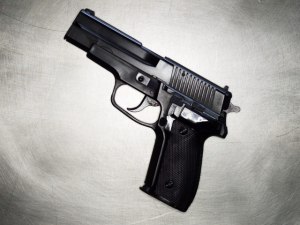 Nine out of 10 black women murdered by men are killed by someone they know, most often with a gun, according to the new Violence Policy Center (VPC) study When Men Murder Women: An Analysis of 2013 Homicide Data.
The annual VPC report is being released in advance of Domestic Violence Awareness Month in October. The study covers homicides involving one female murder victim and one male offender, and uses 2013 data (the most recent available) from the Federal Bureau of Investigation’s Supplementary Homicide Report.
The study found that in 2013, 453 black females were murdered by males in single victim/single offender incidents, at a rate of 2.36 per 100,000. In comparison, the rate for white women murdered by males for that year was 0.95 per 100,000. Nationwide, across all races, 1,615 females were murdered by males in single victim/single offender incidents in 2013, at a rate of 1.09 per 100,000.
Firearms, especially handguns, were the most common weapons used by males to murder black females. When the murder weapon could be identified, 59 percent of black female victims were shot and killed with guns. Within that group, 77 percent were killed with a handgun.
“This is a national crisis with a devastating impact on black women, and we call on elected officials at the state and national levels to take immediate action,” states VPC Legislative Director Kristen Rand.
“When men murder women, the most common weapon used is a gun,” says Julia Wyman,
executive director of States United to Prevent Gun Violence. “Closing gaps in state and federal gun laws will save women’s lives.”
Additional findings from the report relating to black females murdered by males
include:

her spouse, an intimate acquaintance, or a family member than by a stranger.
Where the relationship could be determined, 92 percent of black females killed
by males in single victim/single offender incidents knew their killers. Of the
black victims who knew their offenders, 56 percent were wives, common-law wives,
ex-wives, or girlfriends of the offenders.

related to any other felony crime. Most often, black females were killed by
males in the course of an argument. In cases where the circumstances could be
identified, 84 percent were not related to the commission of any other felony.

The study also ranks each state based on the homicide rate for women across all races murdered by men. Below are the 10 states with the highest rate of females murdered by males in single victim/single offender incidents in 2013: