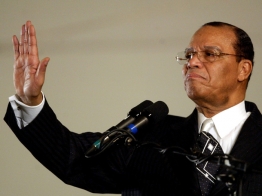 In a wide-ranging conference call on Monday with the black press, Nation of Islam Minister Louis Farrakhan said the upcoming “Justice or Else” rally set for October 10 celebrating the 20th anniversary of the Million Man March is just the beginning of the movement.

Later, on Monday evening, Farrakhan held a special meeting at the Book Cadillac Hotel downtown with a packed ballroom crowd of more than 200 artists, including rappers, poets, writers and musicians. Among those in attendance were such well-known Detroit artists as Jessica Care Moore, Amp Fiddler and rapper Trick Trick.

Farrakhan delivered his “Justice or Else” address in Detroit on Tuesday night at Fellowship Chapel.

“It’s always through the artists that the pulse of the people can be measured,” said T. Pharoah Muhammad, of Muhammad’s Mosque #1,who was in attendance at the event which had not been broadcast in advance to the general public.

“It’s always the artists that can paint the picture of what’s happening in the ’hood, which is why Minister Farrakhan wanted to meet with them. It’s the journalists who are supposed to write about the atrocities that are happening in the neighborhood and alert people of what’s happening so these things can be addressed. Artists have always been necessary for the movement. The young people listen to the artists. They may not listen to the elders so much, but they listen to the artists. If you can put the right word into the youth’s minds and hearts, then you can reach them. Minister Farrakhan said that this generation is the best to have been born in because they are completely fearless.”

Youth Minister Troy Muhammad added that Farrakhan was “trying to inspire activism in our young people.”

Benjamin F. Chavis, Jr., president and CEO of the NNPA and the national director of the 1995 Million Man March, moderated the call, fielding pooled questions from dozens of publishers and editors from black newspapers across the country.

Farrakhan said that walking down the steps of the United States Capitol building and seeing black men standing together, shoulder-to-shoulder all the way down to the Washington Monument and over to the Lincoln Memorial was his most memorable experience from the Million Man March on October 16, 1995. The minister said the men went home and recommitted themselves to their families and wives, others registered to vote, and gang members left their weapons at home.

Critics, however, charged that little long-lasting follow-up was done on the local level.

Farrakhan said those who benefit from white supremacy fear the power of unified blacks, Latinos and all minority people and have continued to work against that unity since the 1995 march.

Farrakhan also noted that since the Million Man March, the black community is not as strong as it should be, so the struggle for “Justice or Else” must take place on two fronts.

Farrakhan said he thanked God for the women who ignited the Black Lives Matter movement.

“We honor the young ladies that fashioned that cry and all who have joined on but no one can rob the young sisters of the honor that God used them to say something that caught on and today Black lives do matter,” he said. “Let’s go to work in our communities to make sure that all of our people fall in love with their blackness and say, ‘black lives matter’ and black love will make sure that black lives matter.”

The truth matters, too.

The United States Park Police (USPP) estimates that of 400,000 attendants at the original march wildly contradicted the estimated count provided by march organizers, which was roughly 1.5 million.

Working with Boston University, the Park Service later revised its estimate to 837,214 — more than twice the original estimate. With a 20 percent margin of error, the size of the crowd could have been 655,000 to 1.1 million men, according to Farouk El-Baz, director of Boston University’s Center for Remote Sensing. Even the lowest revised estimate was more than twice the size of the 1963 March on Washington for Jobs and Freedom.

Following the controversy over the number of people attending the Million Man March, Congress prohibited the Park Service from making official estimates.

Unlike the Million Man March that primarily focused on the empowerment of men of color, the call for “Justice or Else” is meant to address the struggle for justice for blacks, Native Americans, Latinos, women, military veterans and poor whites, everyone who feels deprived in America.

“Even though our struggles may be different, justice is what we seek for all,” said Farrakhan.

The minister also praised Dr. Martin Luther King Jr.’s work during the last years of his life that revolved around economic equality, unionization and labor rights, and land ownership.

Farrakhan pointed out that Blacks were largely shut out of the prosperity enjoyed by white settlers following the passage of the Homestead Act of 1862. Blacks weren’t considered citizens in 1862, a key eligibility requirement that prevented them from claiming any of the millions of acres of free land west of the Mississippi River granted to white settlers by the United States government.

“We have to have land, brothers and sisters, as a basis for economic development,” said Farrakhan, proposing a legislative agenda that would promote land ownership in the black community.

Farrakhan encouraged black business owners to advertise in the black press and buy subscriptions to community newspapers, and that part of the estimated $1.1 trillion in annual buying power wielded by the black community be used to build hospitals, factories and to support black colleges.

He also lamented the anger and frustration that young people have expressed across the nation and that uncontrolled and misdirected anger can lead to great destruction.

“We don’t have a lot of time, but we can turn the anger of our community into production,” the minister continued, adding that young people will be more than eager to live productive lives rather than lives of crime and suffering and savage behavior if properly guided.

As the presidential election approaches, Minister Farrakhan warned blacks against casting their votes foolishly and continuing to vote for the Democratic Party that could and should do more for the black community. He added that he doesn’t see himself voting for Democratic candidates Hillary Clinton (D-N.Y.) or Bernie Sanders (D-Vt.). He made no mention of Willie Wilson, the black Chicago businessman who is also running for president as a Democrat.

“The black vote is a powerful vote,” said Farrakhan. “But unless any of these candidates that are running for president of the United States speak to the need for justice for those that are deprived, why should we give them our vote?”