What started as concern over the growing racial divide in the region led Hiram Jackson, CEO of Real Times Media, and the late Sam Logan, publisher of the Michigan Chronicle, to come up with an idea of a forum where people could really talk and exchange ideas.
That forum was named the Michigan Chronicle’s “Pancakes & Politics” and  the rest is history as the annual gathering of speakers  held four  times each spring  enters its 10th season.
During that first event — then-Detroit Mayor Kwame Kilpatrick and  Oakland County Executive  L. Brooks Patterson  took to the “Pancakes” stage before a curious crowd of 400 at the Detroit Athletic Club.
The two larger-than-life politicos didn’t hold back.
Their frank talk about the Eight Mile divide and Cobo Center, which was huge news as the city and region battled over control of it, took  center stage.
“As long as people are talking and debating issues, there’s a chance you can find solutions,” Logan  told that first ‘Pancakes’ audience.
His words live on and remain a mantra for the signature event that has grown into a must-attend gathering for those who care about our region. 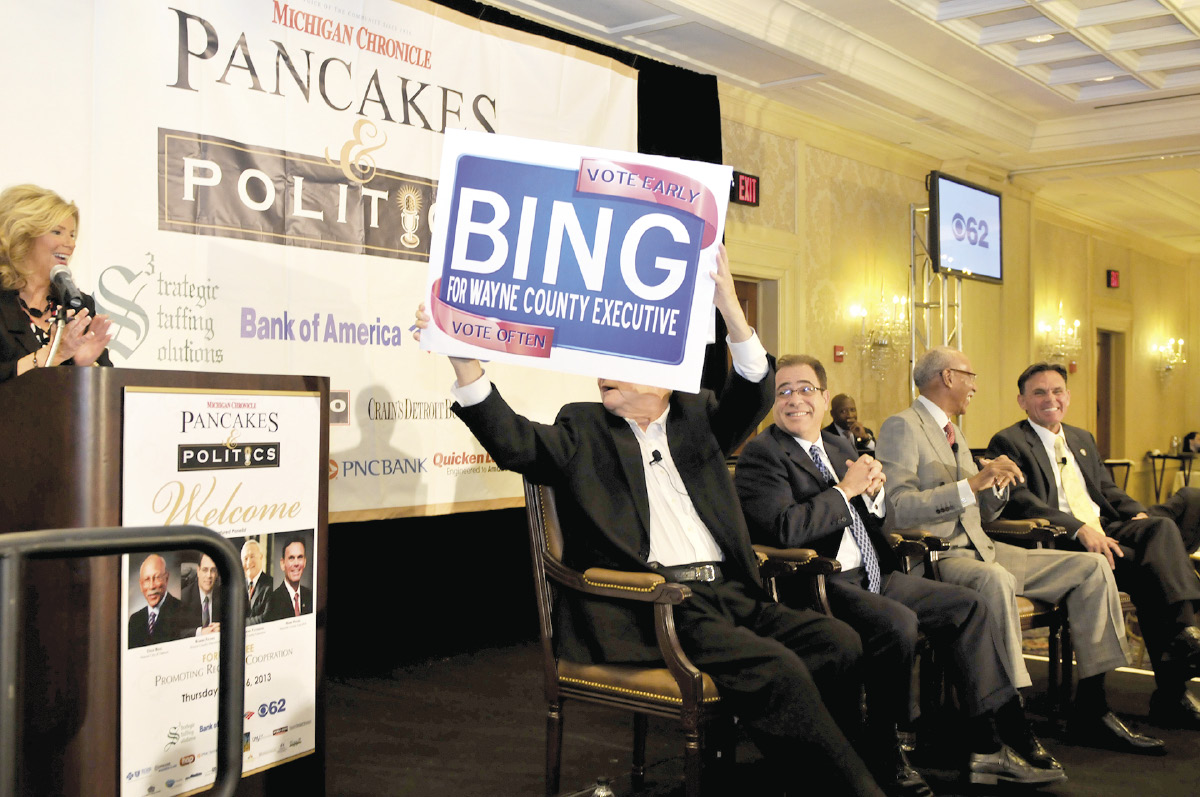 The speakers forums have inspired many headlines and news stories along the way.
There have been 36  forums featuring  well known CEOs, political powerhouses, university presidents, community advocates, union leaders, healthcare leaders, the well known and not so well known.
The event is just as known for the incredibly diverse audience it attracts.
“We are proud that people from all walks across the region and  even state continue to make ‘Pancakes’ a destination,” said Jackson, who is now publisher of the Michigan Chronicle as well as CEO of its parent ­company.
Each “Pancakes” session has sold out within days of being announced.
Thursday’s event, titled  “The New Detroit? A Discussion on Detroit’s  Progress and How We  Ensure all Detroiters have access to Equal Opportunities,”  is no exception a 400-plus attendees are expected. 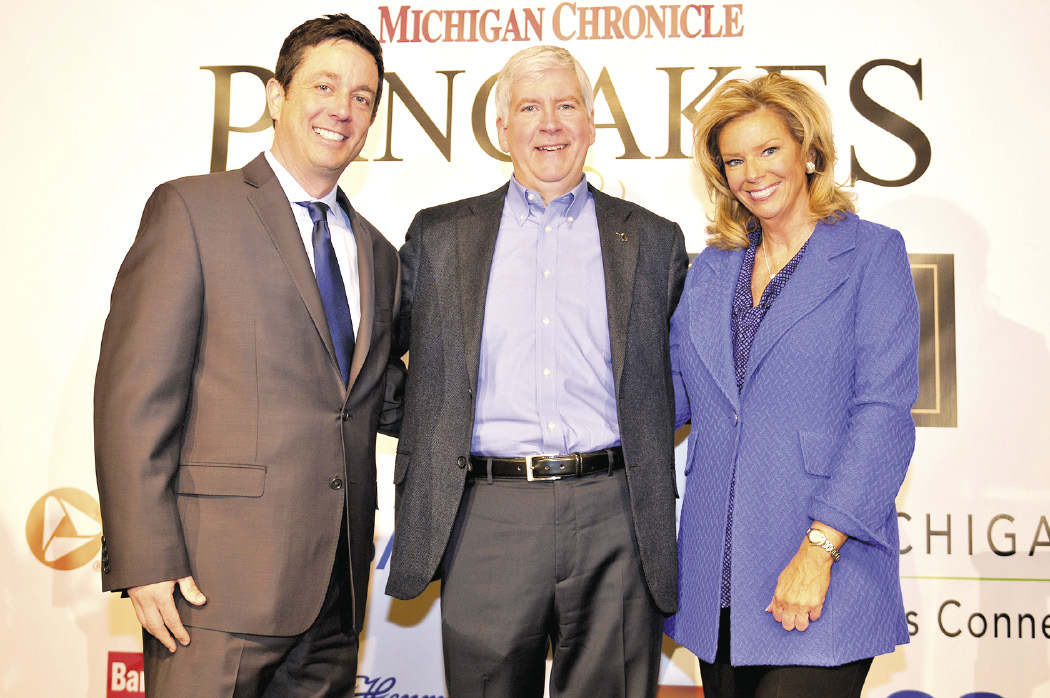 (pictured LtoR: Tom Canedo, Gov. Rock Snyder, and Carol Cain)
That panel will include NAACP  Detroit Branch President Rev. Wendell Anthony,  Detroit Economic Growth Corporate President and CEO Rodrick Miller, Detroit Invest President & CEO David Blaszkiewicz,  and Detroit Free Press columnist Nancy Kaffer.
Peeling back the layers of
‘Pancakes and Politics’
I was honored to have been asked by Sam Logan and Hiram Jackson to emcee the first “Pancakes & Politics” and have done so for each one since.
Michigan Chronicle Senior Editor Bankole Thompson has also been involved and is known  for his probing questions of panelists about issues that matter most to the community.
CBS 62 has aired “Pancakes” as “Michigan Matters” programs for viewers as the station  has been a sponsor since the beginning.  Thursday’s panel will air as a “Michigan Matters” 11:30 a.m. Sunday on March 29, CBS 62.
“With so many issues  simmering across our region, there’s greater need than ever for “Pancakes & Politics,’” said  Tom Canedo, vice president and general manager at CBS 62/ CW50.  “We’re honored to be involved with Hiram Jackson and the Michigan Chronicle family in this important endeavor.”
The Chronicle has worked with an “A” list group of sponsors who  have supported the forums. This year’s event is sponsored by PNC Bank, HAP, CBS 62, Henry Ford Health System, UHY LLP, Blue Cross Blue Shield Blue Care Network, St. John Providence Health System, Comast, Quicken, Chrysler and Chase Bank. WWJ Newsradio 950 and Crain’s Detroit Business are media partners.
“Pancakes & Politics has had an incredibly supportive group of sponsors who have helped us continue to make it an event that impacts our community and made a difference,” Jackson added.
Dozens of Michigan’s most famous and influential political, business, educational and community  leaders have  taken to the stage to tackle tough issues like race, the economy, workforce preparedness,  healthcare, the role of women, the status of minorities and the state of public education in Detroit.
Memorable Moments
Each panel has been unique.
But in my book a few “Pancake” moments  stand out.
Like the time former Mayor Kwame Kilpatrick grabbed a surprised Oakland County Executive L. Brooks  Patterson’s hand during the middle of the “Big Four” where the conversation turned tense with talk of President Barack Obama’s one-time minister, the Rev. Jeremiah Wright.
Holding his hand,  Kilpatrick stood with Patterson and announced to the crowd,  “The one thing we can all agree upon is that we are all against Osama Bin Laden!”
The audience  broke out in applause.
Two years ago, it was paper maché heads of Gov. Rick Snyder worn by demonstrators who chanted outside the DAC where the governor spoke. It was the same day the controversial Emergency Manager and Right To Work state laws went in to effect.
Snyder also appeared and discussed his reinvention of the state, the  city  of Detroit and getting Michigan better prepared for the 21st century’s talent needs.
Indeed, politics has been front and center throughout the forums.
In 2006, then-Gov. Jennifer Granholm and GOP gubernatorial candidate Dick DeVos appeared in the early stages of t red-hot contest to make their case to the audience. Granholm went on to win re-election.
And it was Patterson who brought down the house during another gathering of the region’s Big Four  with his “Dave Bing for Wayne County Executive” poster he pulled out as a surprise.
Bing, who was leaving as Detroit mayor, was considering  his options and Robert Ficano, then Wayne County Executive, was under political duress with investigations into county practices.
Ficano was later exonerated by  the federal authorities of any wrongdoing, But he  lost that election to Warren Evans.  Dave Bing went on to  launch a wonderful mentoring program to guide young African American males.
It was last year when Henry  Ford CEO Nancy Schlichting talked about being a gay executive in Detroit  and how the Motor City was far more welcoming than other places she had worked.
Dr. David Cotton, cofounder of Meridian Health Plan,  who was on that same healthcare panel with Schlichting,  cut to the chase when he added it  was people of baby boomer age who were  grappling with the gay marriage issue while  the millennial generation had no issue with it.
Dan Gilbert, whose picture should be inserted in a  dictionary under the word “catalyst” when it comes to helping Detroit’s downtown,  has graced the “Pancakes” stage a few times.
Gilbert,  founder and chairman of Quicken Loans and Rock Ventures, talked about his  vision of making Detroit a magnet that attracts more young people. He also has put his money where his mouth is, buying up buildings by the dozens and  luring more businesses and young people.
Gilbert , who also owns the NBA’s Cleveland Cavaliers,  threw down the gauntlet when he challenged fellow NBA owner Tom Gores to move the Detroit Pistons from the suburbs back to the Motor City.
Pistons officials continue to say everything is still on the table regarding the notion.
No doubt, Thursday’s forum will touch on the theme of Detroit and race  relations also heard  in the first “Pancakes & Politics.”
And you can bet there will be more interesting conversation and  memorable moments ahead as the 10th season of the Michigan Chronicle’s “Pancakes & Politics” begins.