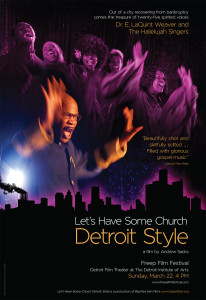 “Good things can still come out of Detroit.”
This comment, from Let’s Have Some Church Detroit Style, might as well serve as the documentary’s subtitle.
Directed by Michigan filmmaker Andrew Sacks, Let’s Have Some Church Detroit Style tells the story of Dr. E. LaQuint Weaver II and The Hallelujah Singers, a 25-member community choir from Detroit nominated in 2014 for nine Rhythm of Gospel Awards, including the highest honor, CD of the Year. The film explores the personal lives of Weaver and his choristers while chronicling the group’s preparation to attend the awards show in Birmingham, Alabama.
The documentary does not turn on the simple will-they-or-won’t-they-win conceit. It is smarter than that. Like George Nierenberg’s heralded 1982 Say Amen, Somebody, the film is a sympathetic survey of how the hope and endurance of a sacred singing community overcome individual and collective trials.
The story behind the documentary is almost as fascinating as the film itself. Although separated in age by 12 years, both Sacks and Weaver both grew up in the same northwest Detroit neighborhood. Sacks’s family moved from the area when he was five, but his love for African American music, especially jazz, which he learned studying piano, was cultivated by listening faithfully to DJ Ed Love on Detroit radio station WCHD.
Weaver, born in Birmingham (the awards show is therefore a coming home of sorts), remained in Detroit. He attended Mumford High School, which turns out to be an unwitting catalyst for producing gospel singers. “Fred Hammond, BeBe Winans, [members of gospel group] Commissioned, the Clark Sisters—they all came out of Mumford,” Weaver explains. Gospel singer and reality television actor Deitrick Haddon is another Mumford alumnus.
Amidst such talent, it is no surprise that Weaver entered the music business, initially joining the legendary Donald Vails and the Voices of Deliverance. Like The Hallelujah Singers, the Voices of Deliverance was a community choir steeped in Detroit’s decades-old rich gospel choral tradition. It’s easy to hear echoes of Vails and another Detroiter, Thomas Whitfield, in The Hallelujah Singers’ onscreen performances.
Weaver and Sacks first met in the 1990s when Sacks, a professional photojournalist, shot some stock photos of the choir, which was founded in 1991. In late 2010, Weaver asked Sacks to photograph the group for its album cover.
Not long afterward, Sacks caught the Chrysler television commercial, “Imported from Detroit,” a gritty two minute look at the city that first ran as a Super Bowl ad in February 2011. In it, Eminem asks of Detroit, “What does a town that has been to hell and back know about the finer things in life?”
The gospel choir Larry Callahan and Selected of God make a brief appearance in the ad.
Sacks says, “It took me a few weeks to digest that ad, and understand how we could use people’s perceptions about Detroit as a springboard to tell the choir’s story. On I-94 one night, on the way back from Chicago, Associate Producer Patrick Murphy and I bounced ideas around. By the time we got to Kalamazoo, the documentary was born.”
In the film, Weaver serves multiple roles: singer, songwriter, arranger, director, teacher, choreographer, evangelist, and father figure. The singers are police officers, auto workers, students, healthcare providers, adult caregivers, and ministers. Parts of nuclear families are in the group. Detroit gospel announcer and university professor Dr. Deborah Smith-Pollard serves as film consultant and provides commentary in several scenes.
Of course, there’s plenty of singing. The Hallelujah Singers, with the charismatic Weaver out front, make a joyful noise. One scene in particular, featuring extraordinary vocalist Rosa Warner-Jones leading “Elijah Rock,” is a revelation.
Detroit is also a main character of the film. Once considered the “poor man’s Promised Land,” according to film narrator Rev. Robert Jones Sr., Detroit is now recovering from municipal bankruptcy. No matter how tough things have gotten, however, The Hallelujah Singers, through its music and personal testimonies of some of its members, is the Greek chorus reminding everyone that hope trumps trouble.
Although this is his first feature film, Sacks believes his experience as a photojournalist has prepared him for this moment: “Photojournalism taught me to watch, to listen, and to be a storyteller.” His photography of Detroit is balanced, showing grit and greenery alike.
“It’s really a great story,” adds Jeff Nolan of Nolan Collaborative, a Chicago-based firm responsible for post production and color correction. “There’s so much history here and so much invested in telling the story.”
“For Andy Sacks to help us tell our story is a blessing,” Weaver adds. “This story is about our ministry, about who God is, and the role God plays in our lives. People don’t know how you can still stay happy with so many trials and tribulations. We as a city may be bankrupt, but we eat every day. He’s still providing.”
Was the choir successful at the Rhythm of Gospel Awards? See the film and find out.
Let’s Have Some Church Detroit Style will make its debut Sunday, March 22, at 4:00 p.m. at the Freep Film Festival. The Festival will take place at the Detroit Film Theater at The Detroit Institute of Arts. After the film, Dr. E. LaQuint Weaver II and The Hallelujah Singers will host a Q&A session and also perform. For tickets, visit www.freepfilmfestival.org. For group and individual ticket sales, call (313) 833-4005.
Previous: The Supreme Angels – The Next Level of the Legacy
Next: “I Know a Man Named Jesus” – Shawn Brown & Da Boyz 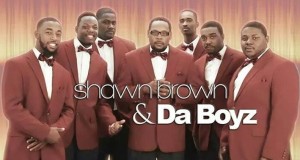 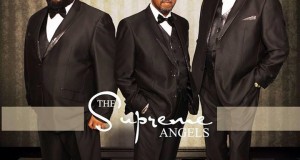 The Supreme Angels – The Next Level of the Legacy 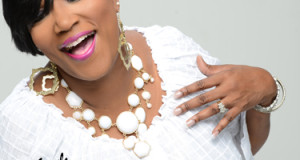