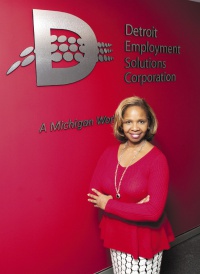 Pamela Moore beams with excitement. To the casual observer, it may simply appear that she is an unapologetic lover of life. But to those who have gotten to know Moore on a professional level, it becomes quickly apparent that her joy is rooted in the work she does on behalf of the citizens of Detroit.
Moore is the president and CEO of Detroit Employment Solutions Corporation. It is Detroit’s workforce and training agency, and part of the Michigan Works! network which provides services to job seekers across the city. DESC administers a demand-driven service delivery system that responds to the talent needs of metro Detroit employers.
“Our goal is to get job seekers employment that will sustain them and their family,” Moore said.
Employers in the region share with DESC the specific kinds of skills they are in need of at any given time. With this information, Moore and her staff set out to find qualified Detroiters to fill those slots.
“Some job seekers have skills that are not in demand,” she said. “If that’s the case, then perhaps training is the answer, getting them reskilled is key. Other job seekers have the right skills but lack the connections and relationships with employers. And that’s where we come in.”
DESC has the infrastructure to assist both the prospective worker with immediate employment needs, and those with the flexibility to sit through a several-month training class. Either way, DESC is equipped to serve job seekers’ varied needs.
“Every job seeker’s situation is unique, and we try to meet them wherever they are. The end game, though, is to get them viable employment,” she said.
There may be job seekers who are not sure how their skills stack up against employers’ demands, and others who may have exhausted all their options in looking for a job on their own. For these individuals, DESC offers career advisors.
Once part of the City of Detroit’s workforce development department, DESC spun off into a separate nonprofit entity in July of 2012. Then-Mayor Dave Bing saw the vast inefficiencies within the department prior to that 2012 move and decided DESC would be a better agency as a stand-alone nonprofit with broader capabilities of serving Detroit residents and the businesses looking to hire them. But while it’s no longer a city department, DESC is still attached very closely with the city.
“It’s common across the country for workforce development entities to be under a nonprofit structure,” Moore said. “It allows us to attract private dollars and allows us to be much more responsive to the business environment. We’re limited in those respects if we’re part of a local municipality.”
So now instead of the DESC’s funds funneling through the city by way of the state, money now funnels through the nonprofit structure. Mayor Mike Duggan appoints its board of directors, and the bulk of DESC’s funding comes from the federal government. These dollars are specifically allocated for Detroit and can only be spent on programs and initiatives for which they are intended. Since the time of DECS’s separation from the city, the number of placements has improved from 6,866 in 2011 to 12,748 in 2014, an increase of more than 85 percent.
DESC’s dedication to solving the employment challenges in Detroit is an important cog in the economic wheel of the city, regardless of the organization’s business structure. Moore and her staff offer targeted programs for both young people and adults. Some of their youth programs include the Opportunity Youth Incentive Fund, Jobs for Michigan’s Graduates, DTE/Recreation, and the Year-Round Youth Program, which aims to improve the long-term prospects for Detroit youth by providing career pathway education and opportunities and other basic skills development. DESC serves more than 2,000 youth each year, ages 14-21.
Programs aimed at adults include Pathways to Potential, Community Ventures, and Detroit Residence Apprentice Program (D-RAP), a nationally recognized pre-apprenticeship program. Of particular interest in DESC’s D-RAP program is its work with skilled trades, for which a pipeline of talent is in demand due to the number of infrastructure and demolition projects in the city such as M1-Rail, District Detroit and various neighborhood revitalization efforts. DESC currently has 139 apprentices enrolled in D-RAP.
Moore is a Detroit native with a deep-seated love for the city. She graduated from Cass Technical High School and earned her undergraduate and MBA from Wayne State University. She says the city is going through a metamorphosis and Detroiters should prepare for and embrace that change.
“We’re not going to be the old Detroit. We’re no longer going to be the Motor City. It’s going to be IT, it’s going to be advanced manufacturing, healthcare. It’ll be a different Detroit, but I still believe it’ll be a Detroit that can be enjoyed by everyone,” she said. “Detroit is reinventing itself and DESC is at the center of that reinvention. But it’s changing fast. If you don’t get on the train, you will be left behind. I want to make sure that Detroiters, especially those who have had a tough time of late, are aware of the resources that are available to them, to help them remove any barriers that may be limiting them from getting the job they want.”
DESC has three locations around the city: in the Samaritan Center on the east side, SER Metro in Southwest Detroit and the Northwest Activities Center. Moore leads an organization that currently employs 50 full-time workers and plans to add another 25 in the next several months.
“We’re growing and changing in response to the business environment,” Moore said. “It’s an exciting time for us. We’re bursting at the seams. But all of our focus is on getting jobs for Detroiters.”