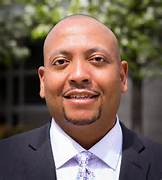 Dr. Lloyd Crews will take the oath of office to serve on the Southfield City Council on Monday, December 29 at 3 p.m. in Council Chambers.  Dr. Crews will fill the vacancy created by the resignation of Councilman Jeremy Moss as the fifth place candidate for Southfield City Council in the November 5, 2013 election. Dr. Crews will serve the remainder of Councilman Moss’ term which expires in November of 2015.
Dr. Crews holds a Bachelor and Master of Arts degree in Political Science from Clark Atlanta University and a Doctor of Philosophy degree in Educational Leadership and Policy Studies from Wayne State University.  He has worked in the field of higher education for more than 15 years, beginning at Wayne State University followed by a position at Oakland Community College (OCC) where he has served as Dean of the Royal Oak and Southfield Campuses for the past 12 years.  In August of 2014, he took on a new role as a tenured professor of Political Science at OCC to more fully pursue his role as a public servant.
Long interested in matters of diversity and inclusion, Dr. Crews has been actively involved in these efforts. Most notably, he coordinated the first Dr. Martin Luther King, Jr. Day Convocation at OCC in addition to creating SAFE Zones on campus for LGBT students. As past chairperson of the OCC Sustainability Committee, he was awarded the Cultural Diversity Award by the Michigan College personnel Association and the Diversity Champion Award from the Bloomfield/Birmingham Diversity Taskforce. In 2014, Dr. Crews received 40 under 40 Awards from both Oakland County and the Michigan Chronicle.
Dr. Crews has also been involved in various external service organizations, including his service on the boards of the Boys and Girls Club of South Oakland County (Field Zone), American Red Cross of Southeastern Michigan, and as Past President of the Southfield Rotary Club. He is a member of the Southfield Partnership Council, Kappa Alpha Psi Fraternity Inc., MLK Jr. Diversity Taskforce, and is past president of the Michigan College Personnel Association.
For more information, call Southfield City Clerk’s Office at (248) 796-5150 or visit www.cityofsouthfield.com.