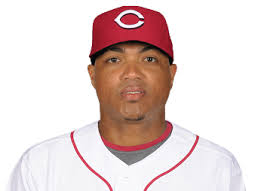 Detroit, MI- The Tigers made another move during the Baseball Winter Meetings by adding starting pitcher Alfredo Simon from the Cincinnati Reds. The Tigers sent shortstop Eugenio Suarez as part of the deal that fills needs for both teams. The Tigers needed another starting pitcher after sending Rick Porcello to the Red Sox for outfielder Yoenis Cespedes.  The Reds needed to add more depth for their middle infielders due to all-star Brandon Phillips’ impending free-agency next season. Suarez made 85 appearances for the Tigers last season, 81 of those at shortstop. He hit .243 with four home runs, and 22 RBIs. Simon finished with a 15-10 record and a 3.44 ERA last season for the Reds. The Tigers also sent 2013 first-round pick Johnathan Crawford to the Reds as well. Crawford who was the 20th overall pick during the Baseball Winter meetings, has a career 2.73 ERA during his minor league career for the Tigers.