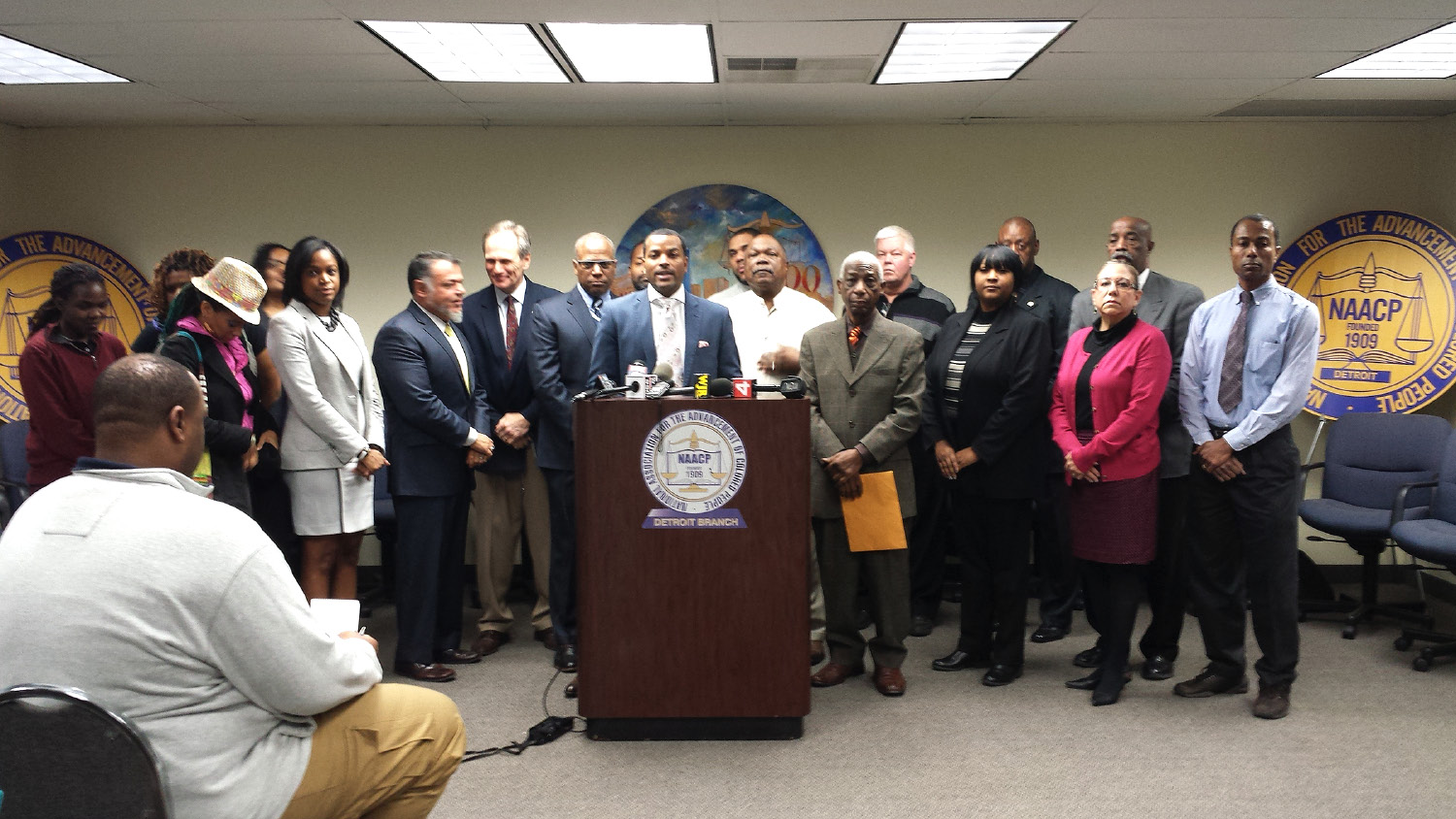 Quoting and standing by the famous words of Dr. Martin Luther King, Jr., from his storied “Letter from Birmingham Jail” on April 16, 1963 that, “Injustice anywhere is a threat to justice everywhere,” approximately 23 men and women of various ethnicities gathered at a press conference convened on Tuesday, Dec. 9, by the Detroit Branch NAACP. It was held at the civil rights organization’s Midtown office. Branch president Rev. Wendell Anthony, flanked by community stakeholders representing dozens of local and regional organizations of empowerment, spoke with great purpose and urgency about the ongoing instances of injustice and unfairness against Black people, levied by law enforcement agencies across the country, in particularly in Ferguson, Missouri and New York.
To better address such escalating problems in African American communities that could, and have, included Detroit, Anthony announced the formation of The Coalition for Justice and Fairness to Reform Law Enforcement.
“We have come together as a community to address the most recent and critical issues between the African American communities, Black and Brown males in particular, with the criminal justice system,” said Anthony. “These issues did not just begin with Ferguson and New York. These issues are both systemic and historic, reflecting discrimination, racial profiling and a basic lack of respect and appreciation on the part of some in the criminal justice system for the people they are duty-bound to both protect and to serve.” 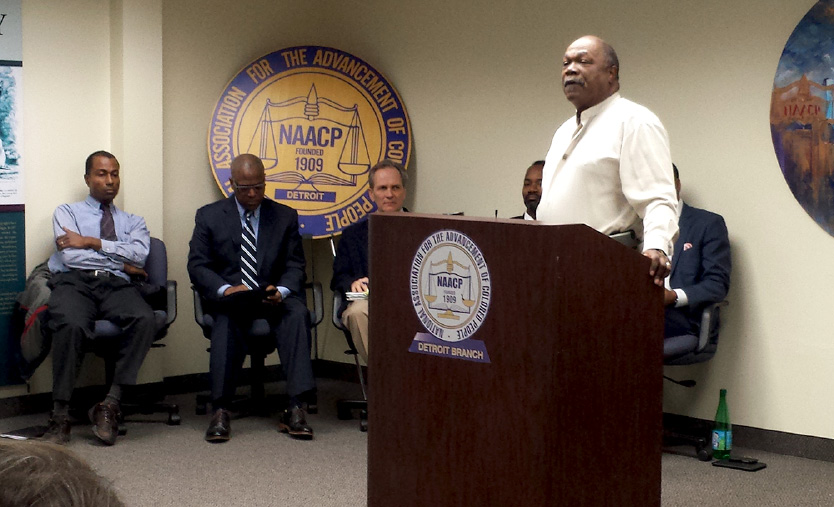 Anthony laid out a platform on which the new coalition will operate in conjunction with the community, law enforcement entities, civil rights organizations, public officials and others. The platform includes discussions of current programs and plans already in existence; a reduction of militarization in the engagement of policing, removal and non-use of military equipment that is more closely associated with war zones such as Afghanistan and Iraq; an increase in educational training and cultural orientation for those engaged in policing in minority communities; a restoration of full powers provided by the city charter for the elected Board of Police Commissioners; the implementation of mandatory use of body cameras and other monitoring devices; implementation of legislation to end racial profiling; the implementation of policies to bring jobs and training to citizens in economically distressed communities; and residency requirement for police officers.
“These programs are not new,” said Anthony. “As a matter of fact, if one refers to the Kerner Commission Report of 1967, it was made very clear at that time of their necessity.”
A partial list of organizations that have pledged membership and support to the new coalition includes ACLU of Michigan, Arab-American Civil Rights League, Black Family Development, Detroit Board of Police Commissioners, Detroit Branch NAACP, Detroit Coalition Against Police Brutality, LA SED, Michigan Black Chamber of Commerce, Michigan Legislative Black Caucus, Michigan Roundtable for Diversity and Inclusion, Moore Black Press Inc., MOSES, the Congressional offices of John Conyers, Jr. and Brenda Lawrence, Peace Action of Michigan, Progressive National Baptist Convention, Inc., and more.
While there has been a multiplicity of coalitions formed to fight injustice and unfairness in the Black communities of Detroit since 1967, when the Motor City experienced one the nation’s worst riots, many of those in attendance feel that the new coalition has the right mix to tackle what’s going on in places such as Ferguson and New York.
“We are going to continue to do what we have been doing,” said Ron Scott, spokesperson for the Detroit Coalition Against Police Brutality. “However, we are bringing a few more bodies to the battlefield, and we are going to push and urge this coalition to go beyond the rhetoric and marching. For those of us who have been out here for a while, we will lend our expertise and history and give great support to this coalition. Therefore, I greatly believe that this coalition will be most successful because I believe people realized now, more than ever, the imminent danger to life on the planet. And it’s not just about police brutality, but it’s also about a breakdown in society, a breakdown in harmony among people. I believe that the movement of this new coalition is something good for this community and that it is not going to be stopped.”
With protests continuing to reverberate around the nation and world, created to bring light to what many see and feel as unjust and unfair treatment of Black people and other minorities, Anthony finds solace, to a certain extent, in what the president of the United States is doing. “Both President Barack Obama and Attorney General Eric Holders have concluded that America has a problem,” Anthony said. “The problem that America has, which goes back hundreds of years, is the enforcement and fairness of justice to all of America’s sons and daughters, regardless of race, sex, national origin, religion or sexual orientation. So in the words of President Obama, ‘The time for talk is over…the time for action is now.’”
“The problem of injustice in the African American community is pretty deep and wide,” said Steve Spreitzer, president and CEO of Michigan Roundtable for Diversity and Inclusion, and who is White. “So no one organization or one person can make the changes alone. There must be a concerted effort, a continuality that is unrelenting to make sure that we have authentic police relations and cultural component police forces that look like the people they serve. The vehicles are in place for The Coalition for Justice and Fairness to Reform Law Enforcement. This coalition will not go away.”