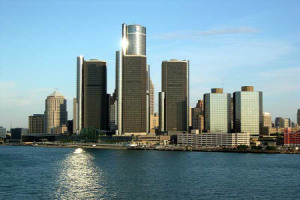 Detroit is one step closer to exiting bankruptcy with Gov. Rick Synder approving the move to end the city’s emergency status, following the receipt of a letter of resignation from Emergency Manager Kevyn Orr.
Governor Rick Synder said Detroit’s financial emergency will end when its bankruptcy plan receives final approval and accepted the resignation of Kevyn Orr, the lawyer he appointed to run the city.
“Financial conditions of the city will be corrected in a sustainable fashion,” Snyder wrote in a letter to Orr that his office released today. “The city is now on a path to meet its obligations to its citizens.”
“I hope and firmly believe that the city’s leadership can continue to build on the solid foundation the restructuring process has created for them,” Orr wrote to Snyder.
Snyder told Orr in a letter Tuesday that he agreed with the determination and “approves termination of the financial emergency status, the receivership of the city of Detroit, and your contract as emergency manager.”
U.S. Bankruptcy Judge Steven Rhodes is expected to sign off on the budget order. A hearing is scheduled Monday in federal court to determine Detroit’s bankruptcy exit date.
Orr and Snyder declared the largest U.S. municipal bankruptcy in July 2013 after failed efforts to reach agreements with creditors. U.S. Bankruptcy Judge Steven Rhodes is expected soon to set a date to implement the city’s plan.
Governor Rick Snyder’s Letter to Emergency Manager Kevyn Orr: