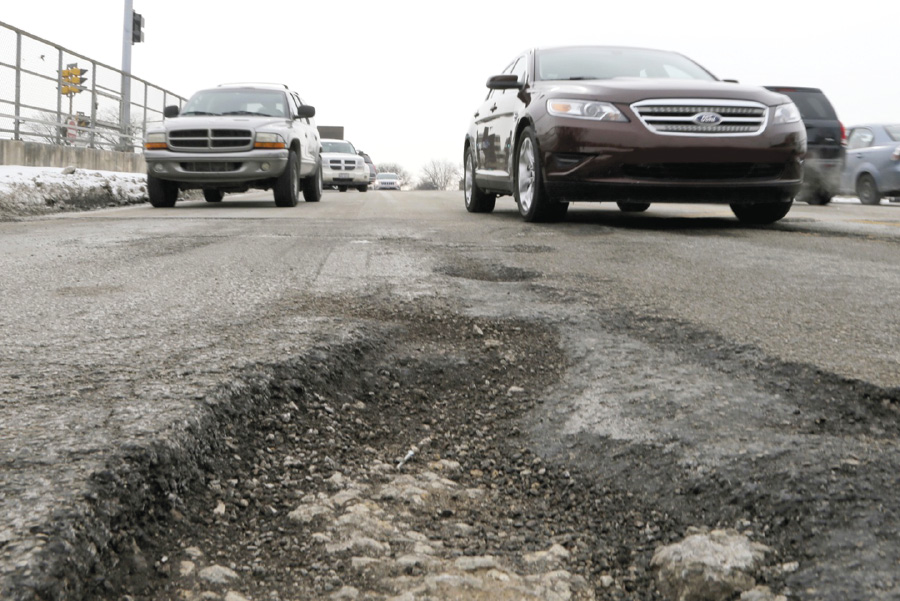 Michigan lawmakers are wrapping up their legislative sessions in Lansing this month before the close of the year. But the question remains whether road funding, will be on the agenda, especially given how it became a contentious issue in the just-ended gubernatorial election. Some business leaders are pushing for lawmakers to find a solution to address the dilapidated roads in the state.
One of the groups, Business Leaders for Michigan, an organization of CEOs, says one-third of bridges in the state are already deficient and that the conditions are clearly unacceptable for drivers.
“As Michigan lawmakers wrap up their work in December, it is important that they find a long-term funding solution for state roads and bridges. Michigan only spends about half the Great Lakes average on its roads, and it is reflected in the condition of them. Our failure to invest adequately in our transportation infrastructure today will ultimately result in fewer jobs, lower income and reduced GDP,” the group said.
“If Michigan truly wants to compete, we need to invest in a system of safe and sound roads and bridges for our residents and businesses.  While we know it’s not easy to raise taxes in the short term, we need to remain focused on our long-term economic objectives and do what is right to keep drivers and businesses on the move. This week, the Michigan House of Representatives will be discussing how to fund our roads and bridges.”
The group is urging residents and businesses to call on lawmakers to ensure the following:
• Large enough to solve the problem.  It’s not enough to just fix what we have. We need a solution that allows us to expand capacity as well.
• Sustainable. We cannot continue to use General Fund dollars to support roads when those dollars need to be prioritized for our other urgent needs — training and educating our workforce.
• Efficient and effective.  Any new revenues must go to our transportation infrastructure and come with guarantees that taxpayer dollars will be spent efficiently and effectively.
The Michigan League for Public Policy issued a report recently noting that paying for road improvements in Michigan should not be on the backs of working families already struggling to cover the basics, nor should it come from shortchanging other essential services that are needed to grow the economy.
The organization said replacing the state’s flat per-gallon fuel taxes with a tax based on the wholesale price of gas would likely have the least harmful impact on working families and low-income individuals, especially if coupled with other policies to offset the effect, such as increasing the Michigan Earned Income Tax Credit.
A sales tax increase, the report indicated, would have the most harmful impact on families with low incomes because those families pay a much larger share of their incomes in sales tax than more affluent households.
“Clearly something must be done to fix our terrible roads, but it shouldn’t come at the expense of those who can least afford the costs. Half of families with young children in Michigan are low income and they are already struggling to meet daily needs,’’ said Gilda Z. Jacobs, president and CEO of the Michigan League for Public Policy.
However, the group said Michigan businesses need safe roads and good public transportation to make sure workers can get to their jobs and to transport goods. It listed the state’s roads as among the worst in the country, and noted that Michigan drivers spend an average of $357 annually on unnecessary car repairs due to damage from deteriorated roads, and that proposals to increase the sales tax or earmark revenue from the sales tax to pay for roads by diverting them from other essential services would harm families struggling to make ends meet.
“The state’s flat gas tax of 19 cents per gallon is at an all-time low, when adjusted for inflation, according to the Institute on Taxation and Economic Policy. The tax hasn’t been raised since 1997. Increasing the excise tax on gas and diesel fuel and placing it on the wholesale cost of fuel will generate new dollars for roads while causing the least harm to working families,” Jacobs said. Gov. Snyder, during a press conference at Lawrence Technological University, called on lawmakers to take up his proposal to raise gas taxes to generate $1.2 billion to fix roads and bridges.
“The message from every corner of our state is clear,” Snyder said. “It’s time to fix the roads. Michiganders are tired of dodging potholes, whether it’s on the highway or in their neighborhoods. They’re fed up with being socked by repair bills because Lansing has ignored the problem for too long.”