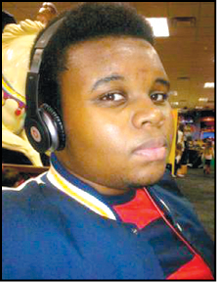 In light of the grand jury decision not to charge White Ferguson police officer Darren Wilson in the shooting death of an unarmed 18-year-old African American teen, Michael Brown, many are reacting to the decision with deep disappointment.
The decision to not bring charges against Wilson, who fired 12 shots at Brown is recasting focus on a criminal, justice system advocates say needs serious reform.
“The Ferguson grand jury’s decision not to indict officer Darren Wilson in the death of Michael Brown is a miscarriage of justice. It is a slap in the face to Americans nationwide who continue to hope and believe that justice will prevail,” said Ohio Congresswoman Marcia Fudge, chairperson of the Congressional Black Caucus. Fudge was among the first people to release a statement minutes after the grand jury decision was revealed by St. Louis County Prosecutor Robert McCulloch Monday night a little after 9 pm.
“This decision seems to underscore an unwritten rule that Black lives hold no value; that you may kill Black men in this country without consequences or repercussions,” Fudge said. “This is a frightening narrative for every parent and guardian of Black and Brown children, and another setback for race relations in America.”
In Detroit, Ron Scott, spokesperson for the Coalition Against Police Brutality, said the failure of the Ferguson grand jury to indict Wilson cast a shadow on the criminal justice system.
“While the Missouri governor was attempting to fend off violent protests regarding the grand jury decision in the killing of Michael Brown, many around the world are asking, could there be a fair assessment of the facts around a young African American man shot by a White police officer? This question today is being asked throughout the United States and around the world,” Scott said. “The failure of the grand jury to indict casts a long, horrific shadow on the United States justice system.”
The family of Brown, who was killed in August, said they were “profoundly disappointed that the killer of our child will not face the consequence of his actions.”
Congressman John Conyers, the highest ranking Democrat in the House Judiciary Committee, said he hopes that in the coming days attention will be paid to the issues and the fact that led to Brown’s shooting.
“I hope that the troubling circumstances in Ferguson will serve to galvanize our national resolve to address the much larger history of adversarial relationships between the police and communities of color,” Conyers said. “Despite the fact that the majority of law enforcement officers perform their duties professionally and without bias — and we value their service highly — the issues of race and reasonable suspicion of criminal conduct are so closely linked in law enforcement practices that profiling bias has an impact on virtually every area of criminal justice policy.
“In cases like Michael Brown, this specter of racial profiling runs the substantial risk of rendering young minority men suspect as potential perpetrators to be met with the deadliest of force.”
Attorney General Eric Holder said the Justice Department’s investigation continues.
“While the grand jury proceeding in St. Louis County has concluded, the Justice Department’s investigation into the shooting of Michael Brown remains ongoing. Though we have shared information with local prosecutors during the course of our investigation, the federal inquiry has been independent of the local one from the start, and remains so now,” Holder said. “Even at this mature stage of the investigation, we have avoided prejudging any of the evidence. And although federal civil rights law imposes a high legal bar in these types of cases, we have resisted forming premature conclusions.”
Holder, who called Brown’s death a tragedy, said the Justice Department “will continue to work with law enforcement, civil rights, faith and community leaders across the country to foster effective relationships between law enforcement and the communities they serve and to improve fairness in the criminal justice system overall.”
He noted that he will continue to “investigate allegations of unconstitutional policing patterns or practices by the Ferguson Police Department.”
President Obama, in an address to the nation on the night the decision was announced, called for calm even though part of Ferguson was in flames after the grand jury decision. A dozen businesses were reportedly burned down as well as two police cars by some angry protesters.
“We need to recognize that the situation in Ferguson speaks to broader challenges that we still face as a nation. The fact is, in too many parts of this country, a deep distrust exists between law enforcement and communities of color. Some of this is the result of the legacy of racial discrimination in this country,” Obama said. “And this is tragic, because nobody needs good policing more than poor communities with higher crime rates. The good news is we know there are things we can do to help, and I’ve instructed Attorney General Holder to work with cities across the country to help build better relations between communities and law enforcement.”
A group of faith-based community groups, the PICO Network in Washington DC, said this about the prosecutor McCulloch:
“St. Louis County Prosecutor McCulloch took a standard process designed to protect the public by determining whether there was probable cause in a murder case, and turned it into a charade to protect Darren Wilson from public accountability. In the face of this denial of justice, we say, Black lives do matter and as people of faith who stand on God’s word to love each other, we will not stand for the dehumanization of any of God’s children.”