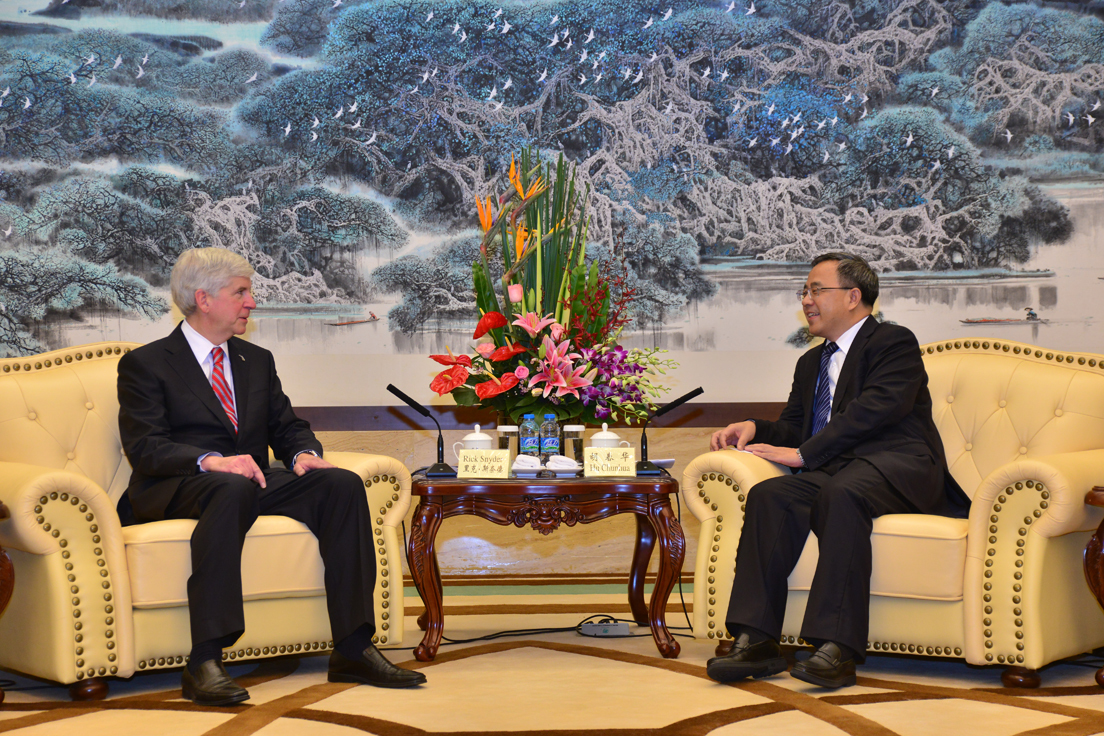 Gov. Rick Snyder met with business executives, government officials, tourism operators, and media from Shengyang and Guangzhou over the weekend and on Monday, making the case that Michigan is a great place to live, work, do business, and visit.
“With 70 percent of global automotive research and development happening here in Michigan, and our strong manufacturing base, talent and business-friendly environment, there is no better place in North America for Chinese companies to expand than in Michigan,” Snyder said. “We are already seeing significant Chinese investment in Michigan, but this is just the beginning of what we have to offer the China market. We are here making a strong case with every executive and government official we meet to build the foundations for long-term investment in our state, showcasing our companies’ high quality goods and services for export, and how Pure Michigan makes a perfect U.S. travel destination.”
Snyder started the weekend with a meeting of executives from a leading Chinese machine tooling company to discuss possible investment in Michigan, stressing the potential Michigan offers for additional business cooperation and investment opportunities. The governor highlighted Michigan’s skilled workforce, research and development assets, and manufacturing capabilities, as well as the state’s strong interest in expanding ties with China. 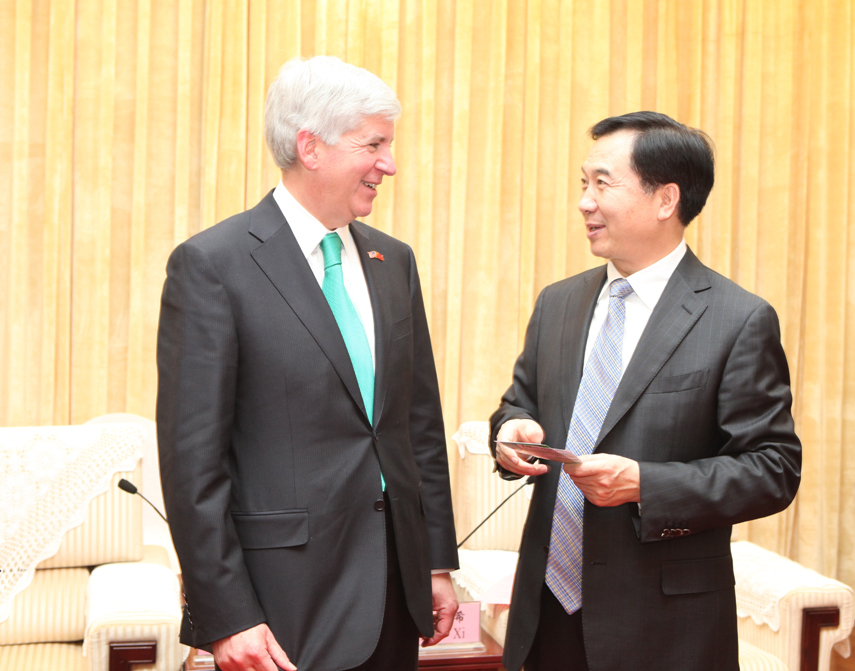 Governor Rick Snyder shares facts about Michigan (translated into Chinese) with the Governor of the Liaoning Province, Xi Li.

He also met with government officials from Shenyang and the Liaoning province in northern China on Saturday, including the governor of the province – Liaoning Provincial Governor Xi Li – and participated in a CEO and business roundtable hosted by the Liaoning Provincial Economic Cooperation Office.
On Sunday, Snyder and the Michigan delegation began the state’s first official visit to Guangzhou in the Guangdong province in southern China. With a population of more than 106 million, Guangdong is the richest and most populous province in China. 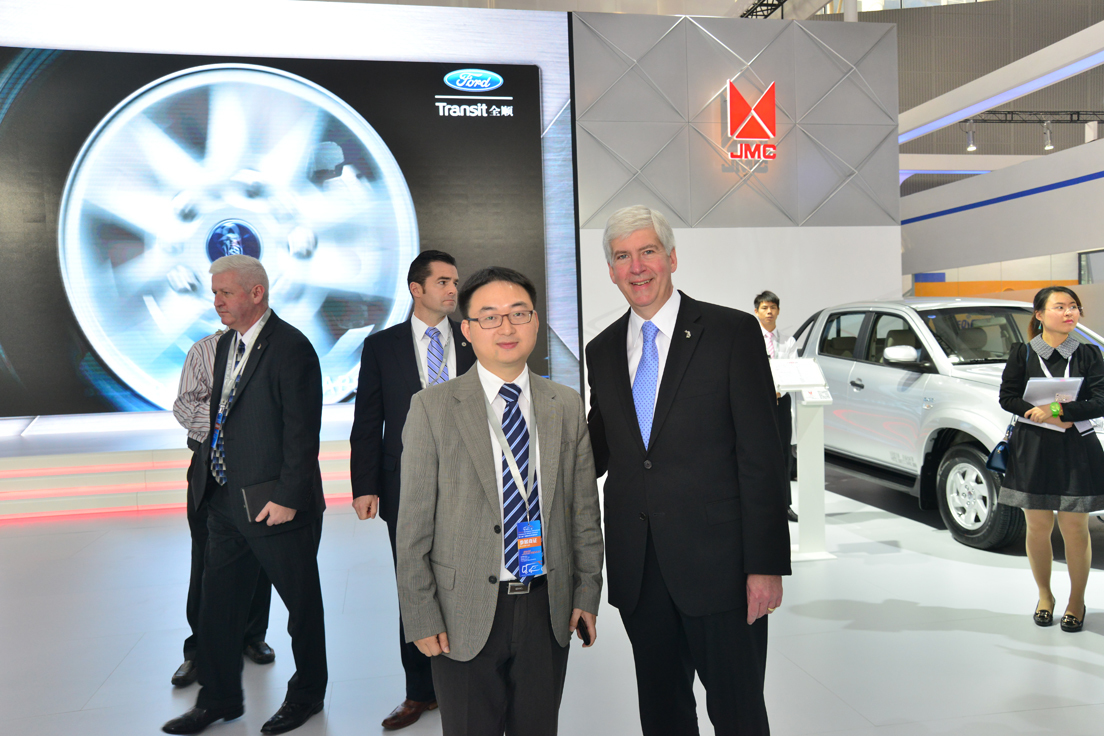 They first walked the floor of the 12th China Guangzhou International Automobile Exhibition and met with chairman of Chinese Council for Promotion of International Trade (CCPIT) Wang Xia, as well as VIP guests from top auto companies participating in Auto Guangzhou. The governor, Michigan Economic Development Corp. President & CEO Mike Finney, and Vice President of the Michigan Automotive Office Kevin Kerrigan also met with leading automotive reporters.
They also joined the signing of a memorandum of understanding between the Michigan Automotive Office and the CCPIT Automotive Sub-Council that commits the MEDC Auto Office to conduct a U.S.-China Automotive Forum both at the North America International Auto Show starting in January 2015 and the annual, alternating Shanghai/Beijing Auto Show.
Also on Sunday, Snyder hosted a tourism forum in Guangzhou with travel operators and media to continue promoting the Pure Michigan brand into the Chinese tourism market, delivering the message that Michigan’s comeback continues and encouraging Chinese travelers to include the Great Lakes State in their visits to the United States. The region has been identified as one of the best markets for travelers to the states and particularly Michigan.

On Monday, after numerous business attraction meetings, the governor and delegation also met with Guangdong Province Deputy Party Secretary Ma Xingrui, who hosted a lunch to introduce the Michigan delegation to Guangdong officials. Snyder later met with Guangdong Province Party Secretary Hu Chunhua, whom he had first met at the Western China International Fair in 2012.
Snyder and the delegation next head to Shanghai, China’s largest city with 24 million residents on the central coast.
The mission is Snyder’s fourth to China since being governor and his administration’s 11th investment mission since taking office in January 2011. Other missions led by Snyder or Lt. Gov. Brian Calley have been to Japan, South Korea, Germany, Italy, the Netherlands, Brazil, Mexico, Israel, and Canada.