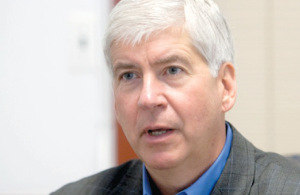 Gov. Rick Snyder announced the appointments of public and private finance experts to the Detroit Financial Review Commission, to help guide the city through fiscal planning and oversight post-bankruptcy. The nine-member commission will work to ensure the City of Detroit is meeting statutory requirements, review and approve the city’s four year financial plan, and establish programs and requirements for prudent fiscal management, among other roles and responsibilities. “I appreciate the expertise each member brings to this commission, which will play a critical role in partnering to move the city of Detroit forward,” Snyder said.
“The state, the city, its residents and Southeast Michigan are represented on this commission, which will work collaboratively with local leaders to continue building a brighter future for our largest city.” Snyder also named
former New York Lt. Gov. Richard Ravitch as senior financial adviser to the commission and special liaison to the State of Michigan. Ravitch has held a variety of state and federal leadership posts, including guiding the New York State Urban Development Corp. back from insolvency and helping resolve New York City’s fiscal crisis in 1975.
In 2012, he co-chaired with former Federal Reserve Chairman Paul Volcker the State Budget Task Force to review the fiscal challenges in six states. The commission was created by the “Grand Bargain” legislative package, Public Act 181 of 2014. Statutorily required members of the include state Treasurer Kevin Clinton, who is to serve as chairman. State Budget Director John Roberts will serve as the designee of the director of the state Department of Technology, Management and Budget. Also included by statute are Detroit Mayor Mike Duggan and City Council President Brenda Jones, or their designees. Gubernatorial appointees are: