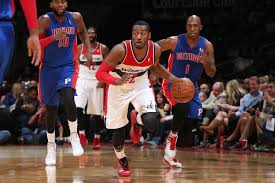 Detroit, MI- The Pistons were able to score over 100 points for the first time this season and Brandon Jennings had his best game of the season. Once again the Pistons could not put the pieces together as they lose another close one to the Washington Wizards 107-103 at the Verizon Center in D.C. Brandon Jennings scored 32 points and dished out 10 assists for the Pistons, but only scored two points in the fourth quarter. Wizards’ guard John Wall had 27 points and dished out 11 assists for the Wizards and made 13-16 free throws as well. The big stat of the game was bench production as Washington’s bench outscored Detroit’s bench 39-25 including 18 points from Rasual Butler. Pistons center Andre Drummond was a non-factor scoring just two point and grabbing just five rebounds. Kentavious Caldwell-Pope scored 20 points for the Pistons but the Pistons lost the rebounding battle to the Wizards 46-39. It is the first game this season where one Pistons player did not reach at least 10 rebounds.
The Pistons were able to race out to a 10 point lead after the first quarter after Jennings scored 16 in the period. The Wizards were able to cut the lead down to two at halftime and the second half started off with both players trading baskets. Marcin Gortat of the Wizards was able to find his rhythm early as Detroit’s front line could not keep him out of the paint or contain his outside shot, he finished with 14 points and 13 rebounds. Washington was able to get to the free throw line 33 times to Detroit’s 22. Josh Smith who has been struggling with his shot lately was 3-10 from the floor and finished with eight points, but did pull down nine rebounds. The Pistons’ Achilles heel this season has been the fourth quarter, which was the same problem a season ago. Countless mistakes including turning the ball over and taking ill-advised shots with the shot clock running is what comes to mind about them.
Detroit’s defense was a bit shaky and head coach Stan Van Gundy was one too happy about either:  “I thought we were a little undisciplined. He was just full speed out of control, throwing up stuff that didn’t have much chance of going in and we kept fouling”, Van Gundy said. It was evident enough where John Wall was able to dribble past Brandon Jennings and make a tough shot over Greg Monroe to give the Wizards a three point lead with 35 seconds left. After Kyle Singler hit one of two free throws to cut the deficit to one for the Pistons, John Wall was fouled and sent to the line. Wall was able to hit the first free throw but missed the second free throw, but veteran Paul Pierce was able to out jump Josh Smith and tap the ball back out to a teammate to ice the game. Next up for the Pistons on their four game road trip is Oklahoma against the Thunder. The Thunder are still without Kevin Durant (foot) and Russell Westbrook (hand). The Pistons are now 04 on the road this season and have a 2-6 record overall.