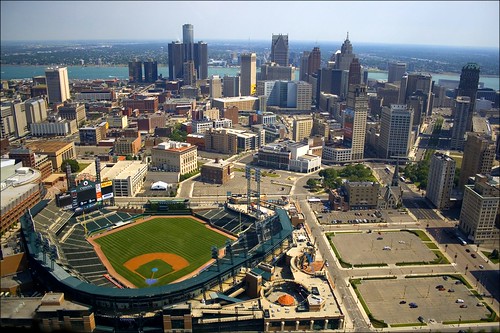 Last week, federal bankruptcy judge Steven Rhodes confirmed Detroit’s plan of adjustment, basically initiating the end of the largest municipal bankruptcy in U.S. history. The confirmation will allow the city to slash $7 billion in unsecured liabilities and reinvest $1.4 billion in services for the city over the next 10 years.
The decision also marks the end to emergency management in Detroit as Kevyn Orr exits. “People will long remember that when Detroit arrived at this troubling hour, its residents and leaders — with supporters statewide — started to pull together as one. Our state has rallied around its largest and iconic city. It is no longer Detroit vs. Michigan, but the embracing of Detroit, Michigan. This day marks the end of the nation’s largest municipal bankruptcy, resolved quickly and successfully as a result of cooperation, compromise and a shared vision from many parties and it offers hope to hundreds of thousands of residents who call Detroit home,” said Gov.Rick Snyder. “This difficult process inspired an unprecedented Grand Bargain where our philanthropic and business communities joined with lawmakers from both parties to lessen the impact on pensions and extend vital services, and we deeply appreciate the sacrifices from retirees who have agreed to take less to help their fellow Detroiters and Michiganders.
“Much work remains, but we are resolved to continue moving forward collaboratively. Our goal is to restore the vitality of this great city from downtown through the neighborhoods, with the quality of life that Detroit’s families deserve. We won’t settle for anything less. Detroit’s journey is far from over, but there is no mistaking that Michigan’s largest city is stronger. Its brightest days are to come.” The Detroit Institute of Arts (DIA) also celebrated the exit out of bankruptcy. “While bankruptcy is not a cause for celebration, exiting bankruptcy certainly is, and we are all extremely happy for the citizens of Detroit today,” said Eugene A. Gargaro, Jr., chairman of the DIA Board of Directors. “The DIA is proud of the role it played in helping to position Detroit for a great future, and we are most grateful to our supporters for their strength and encouragement through these very difficult months.” A key part of the bankruptcy process was the Grand Bargain, the bipartisan legislation that allowed for the city to move forward with bankruptcy and reducing the impact the bankruptcy will have on pensioners’ benefits.
The Detroit Foundation Funders Group, which contributed hefty sums to the Grand Bargain, welcomed news of the city preparing to close the bankruptcy chapter. “We are pleased with Judge Rhodes’ ruling that the plan of adjustment is fair and feasible, and glad that the City
of Detroit has moved swiftly to resolve the bankruptcy and hasten the start of a new era. As foundations with deep ties to the region and a shared commitment to its future, we are proud to have contributed to a plan that helps put Detroit back in the starting blocks,” the group said.
“The DIA settlement, commonly referred to as the Grand Bargain, is a balanced, forward-looking and thoughtful plan that helps the city honor its commitment to hardworking retirees and preserves a key civic asset that contributes to the city’s vibrancy and supports the local economy. It would not have been possible without the leadership and sacrifice shown by Detroit’s hardworking retirees and public sector unions whose continued commitment to a better Detroit should be honored and acknowledged today.”
Lippitt O’Keefe Gornbein, PLLC, a metro Detroit-based law firm that represented and continues to represent the Detroit Retired City Employees Association (DRCEA) and the Retired Detroit Police and Fire Fighters Association (RDPFFA) throughout Detroit’s historic Chapter 9 bankruptcy case said it has been a long struggle.
“We are humbled and honored to have represented both Detroit’s general municipal retirees and the police and firefighter retirees during the bankruptcy process,” said Brian O’Keefe, managing partner at Lippitt O’Keefe Gornbein, PLLC. “Now that the Grand Bargain has been confirmed, members of these two groups have once again given back to Detroit, this time in connection with the future resurgence of Detroit as a major metropolitan city.” Attorney Ryan Plecha added, “We must acknowledge Don Taylor, the RDPFFA Board, Shirley Lightsey, and the DRCEA Board for their tireless efforts and commitment to protecting retirees from greater harm. We are also grateful for the courage and dedication of Chief Judge Rosen, Eugene Driker, Judge Victoria Roberts, Gov. Snyder and the Michigan Legislature for shepherding the city quickly through bankruptcy. The Grand Bargain and today’s confirmation would not have been possible without this collaborative effort. The city can now rise again and write the next and brighter chapter for the city of Detroit.”