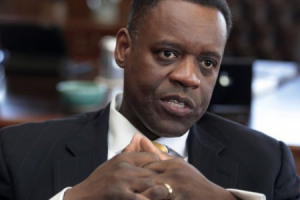 Kevyn Orr, the Emergency Manager for the City of Detroit (“Detroit” or the“City”), released the following statement following the announcement today that Judge Steven Rhodes of the United States Bankruptcy Court for the Eastern District of Michigan (“Bankruptcy Court”) has confirmed the City’s Plan of Adjustment (“Plan”). In reaching his decision, Judge Rhodes determined that the Plan is fair and equitable for all of the City’s creditors and feasible for the City to implement as it moves toward emerging from bankruptcy.
“With Judge Rhodes’s historic decision, Detroit moves further along the path toward financial stability and
success as a viable and attractive place to live, work and invest,” said Mr.Orr.  “My team and I are pleased that Judge Rhodes agrees that the Plan is the best way for the City to resolve its financial difficulties and remain on solid financial footing.
“This decision would not have been possible without the hard work, compromise and sacrifice of so many
people and organizations that put aside their considerable differences and came together for the benefit of Detroit’s future. Throughout this entire process, we have benefited from the leadership of many people – namely, Governor Rick Snyder, Mayor Mike Duggan, Judge Rhodes, U.S. Chief Judge Gerald Rosen and his team of federal mediators, the Detroit City Council, the Michigan Legislature, the foundation community, the Detroit Institute of Arts and its supporting organizations and the leadership teams and advisors of all of the City’s counterparties.
“Importantly, we also have been inspired by the tireless resolve and deep commitment to Detroit of the
City’s workers, retirees and citizens.  Their strength of character gives me great confidence in Detroit’s future now that it will have the financial resources and discipline it needs to fulfill its vast potential.”
The confirmation of the Plan is the latest achievement for Mr. Orr and his team since the City filed for
bankruptcy protection in July 2013.  With the speed and efficiency of a corporate restructuring, Mr. Orr and his advisors have improved the City’s finances, restored basic public services to Detroit’s nearly 700,000 residents and built the foundation Detroit will need to attract residents and businesses in the future.  Key
accomplishments include:
-A $865 million “Grand Bargain” settlement among the City, Detroit’s Retirees, theState of Michigan, the Detroit Institute of Arts and several national philanthropic foundations that shores up public pensions while
protecting City-owned art;
-Allowing City pensioners to keep between 95.5 percent and 100 percent of current monthly benefits;
-Reducing the City’s debt level by approximately $7 billion to allow the City to operate within its means;
-Significant progress on blight removal and neighborhood revitalization;
-Streetlights being replaced at a rate of 1,000 new lights per week;
-Violent crime is down and police response times have improved from an average of 58 minutes to an average of 17 minutes;
-Transfer of the City’ 100-year-old power grid and customers to a more reliable and cost effective privately run utility;
-Privatization of the City’s garbage collection, resulting in on-time and reliable
service;
-Creation of the Great Lakes Water Authority to improve the tri-county area’s
water and sewer operations management of a voluntary employee beneficiary association (VEBA) to provide and administer current retiree health care.
Mr. Orr continued, “Detroit’s recovery began just over 20 months ago with multiple adversarial parties
approaching the process from very different perspectives.  By listening and solving issues creatively,
we have turned even the most ardent objectors into supporters of and, in some instances, partners in the City’s ongoing revitalization.  While today marks an incredible accomplishment, there is still much work to be done, and my team and I remain focused on seeing our job through to its completion.”
To ensure the Plan is implemented consistently and fairly and that Detroit’s recovery is sustainable, the Plan calls for the creation of a Financial Advisory Board for Detroit. The Board, the membership and bylaws of which will be determined at a later date, will ensure financial accountability for the City and that
the progress of the past 20 months does not go to waste.