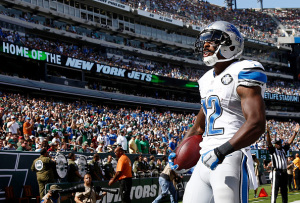 Defensive Line
The defensive line may have started the game on the bad note, as they allowed the Jets offensive line to control the line of scrimmage and running back Chris Ivory to gain 51 yards on nine carries. However, once in the red-zone they quickly woke up as defensive end Jason Jones exploded off the line and forced a bad throw by quarterback Geno Smith on third down, forcing the Jets settled for a field goal.
For the most part the Lions defensive line did a great job in this game. They pressured Smith constantly, making him uncomfortable all game long. Defensive end Ziggy Ansah exploded off the line of scrimmage at one point in the game and plowed into Smith, causing him to throw a bad pass which was picked off by Lions cornerback Darius Slay.
Although, Ivory and Johnson would have some productive moments in this one, the Lions defensive line did a good job of keeping the Jets running game at bay, as they held them to 132 rushing yards, which is 25 yards less than there average rushing yards per game.
Linebackers
After we learned that linebacker Stephen Tulloch would be out for the season with a torn ACL, some people had concerns about the linebacking core of the Lions. However, the Lions proved once again that they were step ahead, as Tahir Whitehead, who was moved to middle linebacker earlier this week proved to be a good a fit as he finished the game with a 12 total tackle performance.
DeAndre Levy was right there with him, as he racked up 11 tackles. Although Ashlee Palmer didn’t have any standout stats, he stilled did a good job of helping to defense the run and the pass. Thus proving the point that this linebacking core can survived and play well without Tulloch, even though are not a great unit without Tulloch.
Secondary
Despite injuries and continues doubts, the Lions secondary continues to prove their doubters wrong as they once gain proved that they are forced to be reckoned with. Now obviously, some of the credit goes to the front seven, who did a great job of pressuring Smith and slowing down the run.
However, it doesn’t change the fact that the secondary, did a good job of making an impact in both the running and passing game. When it came to the running game, I thought the entire secondary did a good job of coming to help. After missing the first three games of the season with safety James Ihedigbo had a great debut, as he racked up five tackles, one sack and a forced fumble.
Beyond that, the secondary did a great job of taking away Smith’s first option and making him settle for his second and third options. Slay picked off the first pass of his career, thanks to heavy pressure from Ansah. Safety Glover Quin and cornerback Rashean Mathis continue to shine under the radar, as they combined for a total of 12 tackles and played great defense in coverage.
While I still believe this was good defensive effort by the entire, I think still think the secondary’s ability to slow down this Jets offense in the passing game was nice to see as they held the Smith to a quarterback rating of 68.9.
Special Teams
Former Philadelphia Eagles kicker Alex Henery, who the Lions signed on Monday to replace rookie place kicker Nate Freese, certainly proved to be a good decision for the Lions. In the Lions opening drive of the game, Henery connected on 51-yard field goal, showing off his strong foot but more importantly he showed his experience and intelligence, as perfectly read the wind and kicked it right down the center. He did, however miss badly from 51 later in the game.
Punter Sam Martin was great as always, as he continuously put the football in the end-zone on every kickoff. Martin also did in good job in the punt game, as he made the Jets drive from deep in their own territory, making it easier for the Lions defense and harder for the Jets offense to get going.
Coaching
When it comes to the coaching, I am always pretty happy wit head coach Jim Caldwell and his staff. Although the Lions offense got off to a slow start in this game, it was great to see Caldwell and offensive coordinator Joe Lombardi, stick with their game plan, as they continuously ran the ball and passed the ball well, while still taking some risks offensively.
Defensively, I though defensive coordinator Teryl Austin, did a great job of making adjustments, as he once again made the right play calls, to initiate pressure on Smith, while also doing a good job of disguising the pass coverage with zone and man coverage throughout the game.
Most importantly, they did a good job of helping the Lions close out another tough win. Thus proving my point that this coaching staff is bringing a new identity to the Lions.
Conclusion
Overall, this was a good win by the Lions. However that doesn’t change the fact that this is a game that the Lions should win. Don’t get me wrong because I am not taking anything away from this win. I am simply saying that this Lions team should win games like this. As much of an improvement as I saw offensively and defensively, I still saw some areas that the Lions can improve on as well.
However, the most important thing that I took away is the fact that the Lions are learning and improving while still winning game, which something they didn’t do well in the past.
Written by LBeasley (Lauren Beasley), Sports Editor of Radio One Detroit