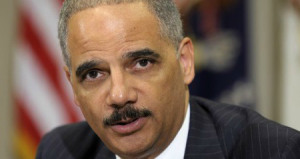 From the White House:
Later today, at a formal event at the White House, Attorney General Holder (pictured) will announce his plans to depart the administration after nearly six years leading the Justice Department. The Attorney General has agreed to remain in his post until the confirmation of his successor.
Holder is the 82nd Attorney General and the first African-American to serve in the role. He currently ranks as the fourth-longest serving Attorney General in United States history; he will have the third-longest tenure if he remains in office into December. He is one of only three Cabinet members from President Obama’s original team still serving in the post to which he was first named.
Attorney General Holder has discussed his plans personally with the President on multiple occasions in recent months, and finalized those plans in an hour-long conversation with the President at the White House residence over Labor Day weekend. At a formal announcement later today, the Attorney General plans to express his personal gratitude to the President for the opportunity to serve in his administration and to lead the Justice Department, which he will call the “greatest honor of my professional life.” He will note he has loved the Justice Department since, when he was a boy, he watched how, under Attorney General Kennedy, the Department played a leadership role in advancing the civil rights movement. During his tenure as Attorney General, Holder has had Attorney General Kennedy’s portrait in his conference room.
The Attorney General has no immediate plans once he steps down. He does, however, wish to stay actively involved in some of the causes to which he has devoted his time in office. In particular, following his recent visit to Ferguson, Missouri, he has spoken with friends and associates about his wish to find a way, even after rejoining private life, to continue helping to restore trust between law enforcement and minority communities. As a career prosecutor with strong relationships with law enforcement, as well as the first African-American Attorney General who retains deep ties to leading civil rights organizations, Holder is uniquely positioned to help lead such a project.
Upon his departure, Holder will conclude a career at the Justice Department that, added together, will have spanned 26 years. He has served at almost every level of the Department over that time. He first joined the Department right out of Columbia Law School in 1976 as a member of the Attorney General’s Honors Program. He was assigned to the newly created public integrity unit within the Criminal Division as a career prosecutor focused on corruption cases. In 1993, President Bill Clinton appointed Holder as the U.S. Attorney for Washington, D.C. He served in that role until 1997, when he was appointed Deputy Attorney General, becoming the first African-American to serve in that role.
Holder also served for four years as a Superior Court judge in Washington DC. Immediately prior to becoming Attorney General, Holder was in private practice as a litigation partner at the firm Covington & Burling.
The Attorney General’s tenure has been marked by historic gains in the areas of criminal justice reform and civil rights enforcement. The last week alone has seen several announcements related to these signature issues. On Tuesday, in a milestone moment for Holder’s efforts to reduce the trend of ever-increasing incarceration, the Attorney General announced that the federal prison population showed the first annual drop since 1982. On Wednesday, in a new step on sentencing reform, the Attorney General instructed federal prosecutors to no longer ask judges to approve enhanced sentences for defendants simply because they may reject plea deals. And just today, Holderannounced that the Department would become involved in a lawsuit over New York’s public defender program, siding with the plaintiffs in arguing that the defenders’ excessive caseloads are preventing them from providing low-income defendants with adequate counsel.
(A summary, for background use only, of some of Attorney General’s notable accomplishments in these and other areas is attached.)
Holder is expected to remain busy in his remaining time in the job. Over the coming weeks, the Department is expected to impose new curbs on racial profiling in the context of federal law enforcement investigations; the policy is expected to prevent the considerations of other characteristics beyond race—such as ethnicity, religion and sexual orientation—as well as apply the ban to national security investigations for the first time. The Attorney General also hopes to complete, by year’s end, the review on the death penalty that the President ordered the Department to conduct last spring. On financial fraud, the Attorney General has discussed the possibility of individuals soon being criminally charged in connection with an ongoing investigation into several major financial institutions. And in the event that the Supreme Court decides to hear a case on state bans on same-sex marriage this term, Holder has indicated the Department would file a brief consistent with its past support for marriage equality.
On Friday, the Attorney General will travel to the US Attorney’s office in Scranton, Pennsylvania. In doing so, he will complete his goal of visiting all 93 federal prosecutors’ offices across the country during his time in office. He is believed to be the first Attorney General to accomplish this feat. Attorney General Holder reserved Scranton for his final stop because the Middle District of Pennsylvania was the site of his first victory as a Justice Department trial attorney in the late 1970s.
Earlier today, Attorney General Holder privately informed his staff and top officials at the Justice Department about his departure plans. He also placed calls to congressional officials and friends.
Holder is married to Dr. Sharon Malone and has three children.
http://newsone.com/3055556/eric-holder-resigns/