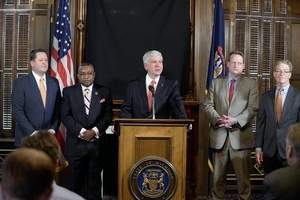 DETROIT — Michigan’s governor signed a set of bills Friday authorizing hundreds of millions of dollars in state help for this beleaguered city.
But all the pomp and circumstance of Gov. Rick Snyder’s signing at the former Globe Trading Co. building along Detroit’s revitalizing riverfront could be for naught if the city’s workers and retirees reject their part of what has been dubbed the “grand bargain.”
“This is a story that’s not over,” Snyder said at a news conference celebrating bipartisan support in the state Legislature for a deal that many never imagined would come. “So while we celebrate today, let’s recognize there’s more work to be done.”
While the signing of the legislation marks an important milestone in Detroit’s recovery, Snyder also said, “This bankruptcy is a terribly difficult thing, and to be open, people are making real sacrifices.” Retirees in particular are being asked for difficult-to-accept cuts to their pension and health care benefits, and “no one should ever forget that. We should always be thankful.
Continue to USA TODAY.com…