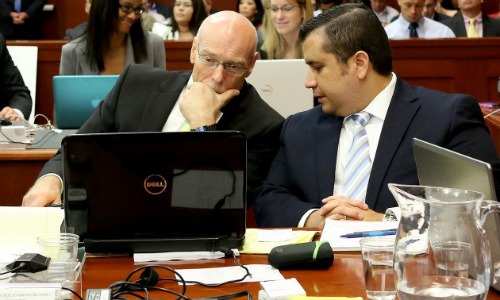 If Attorneys Mark O’Mara and Don West have anything to say about it, getting away with the murder of Trayvon Martin is going to cost George Zimmerman $2.5 million dollars.
And to paraphrase a JG Wentworth commercial: It’s their blood money and they want it now.

Zimmerman was acquitted on all charges in Martin’s shooting death, even though he got out of his vehicle, followed and ultimately shot the unarmed teen through the heart after a scuffle on Feb. 26, 2012.
O’Mara and West took on the case in April 2012 — after Zimmerman’s first legal team quit — and each attorney has billed Zimmerman about 3,000 hours.
See how it all adds up via The Orlando Sentinel:

O’Mara took on the case in April 2012, saying he would represent Zimmerman at no charge. Then he discovered that Zimmerman and his family were raising funds via a website and that money was pouring in, at least initially.
Throughout the case, even after the trial, O’Mara said he and West had not been paid a dime, although they hoped to be someday.
In an interview this week, O’Mara said Zimmerman paid them “a minute amount” after the trial.
O’Mara is still hopeful, he said, that there might someday be money he and West can collect.
In truth, they have already benefited financially from Zimmerman’s legal-defense fund. Several months ago, O’Mara reported spending $52,550 on “law firm support and infrastructure.”
O’Mara and his spokesman never provided a detailed accounting as to what that included, but they said it was such things as more computers, upgraded software, new phones and improved office security.
West and O’Mara also formed a private partnership, Timber Run Enterprises LLC, and bought the building next door to O’Mara’s Concord Street office in downtown Orlando. That building, like O’Mara’s office, is a former single-family home for which the lawyers paid $270,000.
…
[Zimmerman] contributors gave more than $400,000 to his legal-defense fund, money that went toward case expenses and supporting Zimmerman and his wife — not paying O’Mara and West for the hours they were working.
O’Mara charges $400 an hour, West $350 an hour, rates that area attorneys describe as reasonable, given their years of experience and skill.

“I totally understand why the bill is so expensive. Being that this was a high profile case, they had to totally shut down their law practices in order to defend Zimmerman. They had a full team of investigators, lawyers and paralegals working on his case around the clock.
“With Zimmerman having potential book deals, NRA endorsement, websites raising money for him among other things, he can afford to pay something, for sure.
“Freedom ain’t free; it costs money.”,

Wherever one falls on the issue, one thing is clear: To the Sanford Police Department and a jury of 6 women — 5 of them White — Trayvon’s life wasn’t worth one day in jail. But to O’Mara and West, Zimmerman’s freedom is allegedly worth $2.5 million.
That’s American justice math.