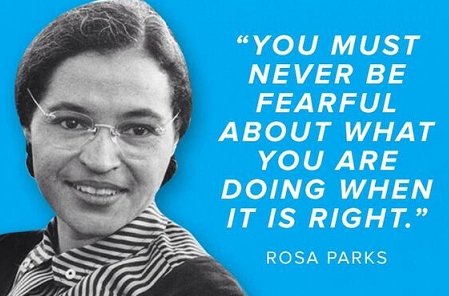 Fifty-eight years ago today, Rosa Parks, then 43-years-old, became a lightening rod for the Civil Rights Movement when she was arrested for refusing to give up her seat on a city bus in Montgomery, Alabama.

Yes, the Civil Rights Movement that followed Parks’ courageous act — which itself followed the courageous act of Claudette Colvin[1] — ended racism, according to a tweet by the Republican National Committee:

The murders of Four Little Girls in Birmingham and Wharlest Jackson in Natchez, Mississippi weren’t racist. The assassinations of Dr. Martin L. King, Jr., Medgar Evers and El Hajj Malik el-Shabazz (Malcolm X) were apparently not race related, at all. The contemporary effects of slavery: School-to-Prison pipelines, disparities in prison sentencing, Stop-and-Frisk, just to name a few, have nothing to do with racism because racism is over, according to  the GOP. The RNC tried to explain themselves in the following tweet:

But it was too little, much too late.

In response to the GOP’s idiotic “tribute,” @FeministaJones[2] created the scathing #RacismEndedWhen[3] hashtag and the results are brilliant.

Read some of the best below:

Of course, some racists have tried to take over the conversation to explain why a hashtag created to point out that racism is alive and well is, in fact, racist.