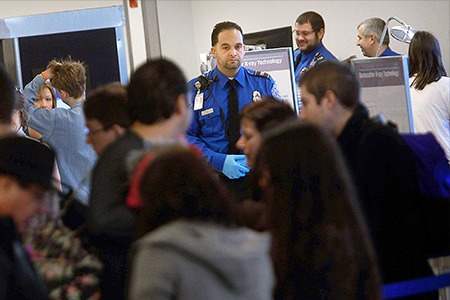 Congress isn’t expected to raise taxes as part of any 2014 budget deal, but it might hike some “user fees” the federal government charges businesses and individuals.
A likely possibility: An increase in a passenger security fee that industry lobbyists warn could add to the price of plane tickets.

Lawmakers face a January 15 deadline if they want to replace some of the automatic spending cuts known as the sequester. But that will require making other spending cuts or raising revenue to preserve the sequester’s intended savings.
Airline advocates argue that an increase in the security fee to reduce deficits would do nothing to strengthen airport security or speed up long security lines.
Right now the passenger security fee per ticket is $2.50 for each leg of a trip. But the total fee to get to a destination is capped at $5.
Say you book a nonstop roundtrip to Chicago. You pay $2.50 on the way out and $2.50 on the way back. If you booked flights with stopovers each way, you’d pay $5 on the way out and $5 for your return home.
If Congress goes ahead with a hike in user fees, political analysts and the airline industry expect lawmakers would double the security fee to $5 per trip each way. That would effectively double the fee for nonstop flights, but leave the fee for multi-leg trips unchanged.

It’s not clear how much of the increase would be passed on to fliers.
“Each airline will take a different approach. It will manifest [either] as the passenger pays, the airline pays or a little bit of both,” said Sean Kennedy, senior vice president for global government affairs at the trade group Airlines for America.
Doubling the passenger security fee for nonstop flights could raise about $13 billion over the next decade if it went into effect immediately, or $11 billion if it started in 2015, said Marc Goldwein, senior policy director at the Committee for a Responsible Federal Budget.
But that would only make up for some of the budget cuts that lawmakers are seeking to replace.
That’s why analysts expect that negotiators also may propose hikes in other user fees, as well as an increase in broadband spectrum sales, and higher federal worker retirement contributions, among other measures.